Double Or Nothing
Otter Creek Brewing 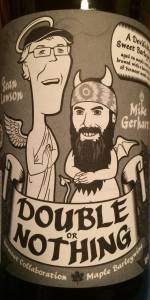 T.F: Sweet up front. Maple and toffee... caramel and brown sugar. Cooked raisin and plum... molasses and a bit of spice. Medium bodied... sticky on the tongue with some hopping for balance. More baked goods and sweets at the finish.

O: A big rich barleywine. Sweet and fruity... a step below the best of the style but good drinking. A nice evening sipper.

Served in a small snifter, it was a dark, opaque chestnut color. Had a frothy beige head with good lace on the glass. Nose had good amount of dark fruit, like raisins and dates. Body was medium-plus, and it was quite smooth.

Had some light caramel and toffee action to start, followed by more dark fruit. Had some currants and figs, a hint of brown sugar and a smidge of rummy fruitcake. Not getting any maple, though. A solid barleywine, though well over-priced. Prosit!

Darker amber color. It seems to be clear. Small but lasting head. Some spots for lace.

Deep dark caramel sweetness to the nose. There's a bit of molasses as well.

Solid, darker malt base. Interestingly, this is not sweet initially but the sugar kicks in quickly. The body is very rich as one might expect with a lower carbonation level to boot. The swallow is very sweet with a strong treacle flavor. The aftertaste lasts with this sweetness dominating but I get a light bitterness which fails to provide balance.

12oz bottle from CraftBeerLos (thanks man!). No discernible bottling date. Served in a Barrel and Barley teku. Enjoyed 8/6/17.

Pours a turbid, rosy burgundy with just shy of two fingers of ecrue head. The froth shrinks to a thin film and modest band with only a couple tiny pinpricks of lace.

Lush, full body with very little carbonation. The aftertaste is like maple cereal.

Double or Nothingis a my first taste from Either Otter Creek or Lawsons. The oak and maple are a bit more subtle that I may prefer but the base barleywine is solid.

I bought one of these bottles when they were initially released, but when I saw that they were in the Clearance area of one of my local bottle shops due to lack of movement, I snapped up another one. One for cellaring, another for consumption a couple of years already down the road. Such is the nature of The Bottle Backlog here at Chez Woody.

From the bottle: "A Devilishly Sweet Barleywine aged on maple wood and brewed with a heavenly dose of Vermont maple syrup. Brewed in collaboration between Sean Lawson of Lawson's Finest Liquids & Mike Gerhart of Otter Creek Brewing Co."

Having Pop!ped the cap, I had no choice but to perform a VERY gentle pour since I had a real feeling that there was probably some settling involved here. Once decanted into an awaiting snifter, an in-glass swirl raised two brief fingers of foamy, soapy, light-tan head with moderate retention. Color was Dark Brown to Very Dark Brown (SRM = > 27, < 34) with NE-quality clarity. Nose left me reeling as a sugary malt bomb, laden with maple syrup, suddenly blew up in my sinus cavity! I should have been warned by the fumes wafting off of its surface, but I am the Duty Dummy & took a good whiff just to make sure. Whew! Two years in the bottle & it had not mellowed one iota! Its twin is going into the cellar, perhaps never to be heard from again. Mouthfeel was medium-to-full, suggesting that maybe at least one aspect of this monster was beginning to fall away and mellow. Jeez-O, man, the sweat was simply streaming off of my forehead & down my face. I think that Sean Lawson is The Devil (or if not, he certainly called her forth for this one)! Sweet & boozy - why I am not a fan of most rum. This was like diabetic shock in a bottle/glass. This would have been better served calling it an English Barleywine, since those are more malt-driven. This lacked the requisite hops, IMHO, leaving me with the sugar shakes. I kid you not, I was sweating & shaking from this one. I generally eschew such things in search of bitterness & having let down my guard, I was paying for it. Finish was ironically, dichotomously dry, a testament to the yeast having continued to do its thing in the interim since its purchase. It will be quite a beer someday, but it needs a LOT more time to age in the interim, IMHO. YMMV.

This was poured into a mini snifter this time, though other times, regular snifters, still, pretty much the same thing. Anyways, the appearance was a dark brown close to black color. There wasn’t any head nor lacing. The smell started off with some honey and maple syrup. Light dry oaky to woodiness slides super light in underneath. The taste compliments the sweetness of the maple syrup and the honey. Oaky woodiness slides in underneath to try and balance. Smooth semi-slick sliding sticky maple to honey aftertaste with a sticky sweet finish. On the palate, this one sat about a medium on the body with a decent sipping quality about it. Carbonation seems to have fully gone away, but I’m okay with that as I’m leaning towards the English side of the barleywine wheelhouse for this one. Overall, as a barleywine, this one works for the time that I had it. Though I’ve had several of these previously. I think I can finally say, things have equaled out a bit on the aroma and flavor allowing the maple and the honey to actually coincide with some malts.

On tap at City Tap in Boston.

Smell is sweet, with raisins, malt and dried fruit carrying the load. I detective a hint of cocoa hiding in the background.

Soft mouthfeel, just the right amount of carbonation and thickness.

Delicious barley wine, almost bordering on a Quad. Nice sipping beer, that reveals a lot as it warms.

Look: Like an imperial stout, but a little lighter color than the redness of a Guinness. Brownish red hue. (8/10)
Smell: Like a port wine mixed with an imperial maple stout. Maple is strong, cherry, orange peel, blueberries, strawberries, Cream, coffee, Earth, Cabernet grapes. (9/10)
Taste: Reminds me of a port wine. Maple and Syrup are strong but refreshing. Hops and Malt come though slightly. (9/10)
Feel: Like a carbonated port wine. Syrupy but not overbearing. Great lingering mouthfeel. (8/10)
Overall: Reading the reviews, I feel like everybody drank this with the wrong intention. This bottle was delicious, like a fine Port Wine mixed with Maple Syrup. I really enjoyed this and would recommend at 50 degrees, as a dessert beverage or with a nice Belgian waffle for breakfast. Let this one breath and open up. (9/10)

Aged for one year...much more character than I remember. Sweet more like a stout than barleywine

Served at 50-55 Degrees Farenheit, the 12oz bottle with "2015" printed on the shoulder was poured into a 13oz Libbey Belgian Tulip/Snifter

A - Leaving most of the sediment behind, the beer pours a beautiful, deep mahogany with a reddish hue. Due to the careful pour, a minimal khaki colored head formed but faded quickly to a thin film on the surface. (4.5)

S - Caramel, Maple Syrup and Plum are the dominant aromas with the Tannin from Maple Wood Staves very much present...and very different from the aromas imparted by Oak, but it certainly has a "barrel aged" vibe. (4.5)

T - Maple Syrup and caramel sweetness and are really pungent with a hints of Dark Fruit and something akin to Bourbon (similarities can be found with Founders Backwoods Bastard). However, just when it might become cloying, the tannin from the wood sweep in and gently dry things out and allow for the Maple Syrup to linger. (4.5)

M - Full bodied and palate coating (i.e slightly syrupy) with delicate carbonation that is perfect for the style. (4.5)

O - Well executed Barelywine with big, but not overdone flavors of Maple Syrup and Maple Wood. Definitely on the sweeter side so those who prefer hoppier versions might be disappointed. However, this makes for a wonderful breakfast beer (pour it over your pancakes!) or as a digestif sitting around the fire on a cold winter night...best enjoyed at cellar temperature. (4.5)

Barelywine is my favorite type of beer, as soon as I saw this on the shelf I had to grab it. Its a great beer, worth the price.

Look: typical look for a barleywine, more of a brown color than a red.
Smell: Alcohol, upfront. Sweet smelling, maple hint.
Taste: Malty, malt, malt! Sweet, with just the hint of maple syrup.
Feel: Tingles on the tongue, and smooth going down.


Double Or Nothing from Otter Creek Brewing
Beer rating: 89 out of 100 with 401 ratings