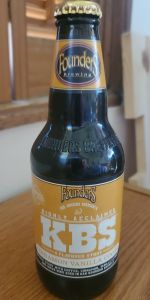 Notes: Here’s one for the cocoa lovers: KBS (Kentucky Breakfast Stout) Cinnamon Vanilla Cocoa – the sumptuous, deep coffee and chocolate flavors of KBS rise to the next level with a swirl of cinnamon and a hint of vanilla to create a sweet-but-not-too-sweet barrel-aged drinking experience. It’s a whole new spin on KBS that’s sure to sweeten your spirits.

Appearance: Pitch black with a one finger brown head that had good retention and left nice lacing.

Overall: Great aroma, and taste was nice, but the cinnamon was perhaps a bit strong. It was sweet, but there was a good bitterness that balanced it, such that it wasn’t overly sweet. A good variant, however I do prefer the original KBS more.

I smell it all. The normal KBS coffee notes and a nice hit of chocolaty vanilla but it's the cinnamon that is most tantalizing.

Maybe my pallet isn't quite sophisticated enough but the initial taste is like a little sweeter KBS. It has the coffee and cocoa and is really delicious but outside of the added sweetness it's just KBS.

It's thin for a stout because that is a signature quality of Founders and it has a very mild fizz. The really special aspect of this beer is finish. It's a little bitter but the vanilla and cinnamon shine through in the end.

This is good but it should be, it's KBS. I really appreciate the added sweetness and the follow through on the promise of vanilla and cinnamon. Overall I give it a 5.7 out of 6. Spectacular!

This isn’t the world beating stuff of KBS legend, but it’s a good imperial stout. Almost like the milk from a bowl of Cinnamon Toast Crunch mixed with a BBA coffee stout. It’s rich and thick… sticking to the feel of Founders imperial stouts and you can’t go wrong with Founders stouts. I remember the first KBS and CBS I had years ago… Just the class of them! To this day I can think of no other barrel aged stout that has given me that sort of feeling. The sheer brilliance and wow factor was revolutionary. To me they’re still the cream of the crop and best in the world. This doesn’t reach those marks but it’s one of those unique takes that’s great to enjoy! I’d recommend this to people looking to delve into the depths of big, dark stouts! It has the sweetest to entice anyone.

Yeah, sure, ok… It’s fine. It represents itself well like Kanye when tranquilized. But I just don’t think it needs all the Pezaz. Regular KBS is Candice Swanepoel; but this one is Candice with augmentation. Sure, she still has it going on, but it wasn’t necessary. It wasn’t necessary.

A - Pours pitch black with a fizzy one finger tan head. Light amount of soapy lacing.

Pours into my tulip glass a high viscosity fully opaque near black with a creamy brown head. Great retention and fluffy lace.

Scent is bourbon, raisins, chocolate, vanilla, mocha java and a hint on cinnamon. I think I also get toasted coconut.

Taste is chocolate, bourbon, raisins and dark fruit. The cinnamon comes across more strongly on the taste than the nose but is not overwhelming. Vanilla. Rich dark roast coffee. Chocolate covered cherries. Dark cocoa. A hint of char and roast. Sweet but not overly sweet.

Mouth is oily and weighty.

Drinkability is good for a 12% brew. Alcohol is not noticeable and my glass emptied quickly enough that I could imagine having a second.

Typical of the KBS series this is a fantastic Imperial Stout featuring rich chocolate coffee and bourbon notes. The cinnamon doesn't really add much and I think I prefer the other variations in the line but either way this is a great stout.

L - Dark as night, good head, decent but not exuberant lacing; oily looking mofo in the glass. Dense. Nice.
S - You do pick up some of the vanilla-ish and cinnamon on the nose as this beer warms but it's not one of the defining characteristics. Not sure the cinnamon is detectable or useful as an adjunct here.
T - I think normal KBS is just... better than this. The variant here loses some of that strong bourbon/imperial quality, and for me at least, I get distracted by the "what the hell am I tasting" face, especially with the muddled quality of the cinnamon and vanilla/nibs aspects. I think it doesn't do the base beer any favors. Fun to try, but won't buy again. Just not super discernible and I tried it at 40F, 50F, and 60F - didn't to much for the beer to let it warm; still a bit of a stout "puddle" mess.
F - No complaints here; I think it sits a little "hot" on the palate, but that could also be the taste bending my sense of mouthfeel on this one.
O - a fun variant to try at least once, if you're a cinnamon fan, but I'm not sure all the other aspects on top of cinnamon do anything; just a little muddled overall. Again, not hating, just think the overall balance and direct flavors of regular KBS are better, more discernible.

The beer is really dark with a brown head that has quick and loud carbonation. The smell is a lot of cinnamon and toasted malt. The taste is very much a kbs, a crisp smooth stout that has that barrel taste. This one has a lot of coco bitterness with a cinnamon burn. The feel is really nice, its not sticky and is really crisp. Good beer, if you see it, buy it to try it.

L - deep black with a light tan head that dissipates quickly but leaves a thin cap behind. Some lacing as well.
S - Tons of rich dark chocolate, cinnamon, and roasted oats on the nose. Some vanilla in there as well.
T - Follows the nose: rich dark chocolate, roasted malt, and cinnamon dominate up front (cinnamon is very pronounced) and throughout intermixed with notes of vanilla. Bourbon and coffee notes are somewhat minimal, but they are there.
F - full bodied with light to moderate carbonation.
O - another amazing KBS variant, but I'm not entirely sure this one pushed the bar high enough/ventured far from the original recipe enough.

Beer poured black with a very nice brown head with the original pour.

Nose is very nice, cinnamon forward along with a touch of bourbon.

Taste us a very large malt base that has a touch too large dose of the cinnamon adjunct that overwhelms the vanilla. Touch of chocolate comes across towards the end of the sip. Finishes with a balancing bourbon that provides a warming afterglow.

Mouthfeel is medium to large bodied and very smooth.

Overall a nice dessert beer but the cinnamon is too much. Scale this back and we are talking about a much more pleasurable beer!

A: Pours a very dark brown with a surprisingly bubbly tan head that lingers. Heavy carbonation up the side of the glass. Pours a little thin, too.

S: Big cinnamon bomb up front, followed by some vanilla and a slight dash of cocoa or dark chocolate. Don't get a ton of barrel characteristic here unfortunately.

T: Again cinnamon dominates up front, followed by a boozy note. Lots of alcohol and minimal barrel character. Vanilla hidden in the back. Hard to get any cocoa. Kind of a muddled mess here.

M: Very thin here, way too carbonated, and a touch too boozy on the finish. Not very pleasant.

O: Well, I didn't see this coming. After two amazing and highly regarded variants in the Espresso and Mackinaw Fudge (Top 250), this one had a bit of hype coming in. However, it is a total disappointment for me. People seem to like it a lot more than I do on here, but I can't get with this. The label should have clued me in, 3 ingredients in big lettering on the label, seems like they're cramming a bit too much here. I know other beers have pulled this off though (Prop 2014, Bomb! series), but the Founder's try is a swing and miss. Very muddled flavors, and just a terrible mouthfeel. Feels like a low-tier Dragon's Milk to me. I thought KBS was really making a comeback with the last 2 variants, but here we are with the same old thin mouthfeel and barrel-less character of the last couple vintages of regular KBS. Hopefully they can correct course with the upcoming Hazelnut variant, which sounds simpler and should be easier to pull off.

Recommendation: Honestly, if you're overwhelmed with beer this winter (I know I got a ton of new stuff to drink through), do not feel bad if you skip this, you're not missing too much.

A very dark color bordering on black. I held this against different light sources, lamp light, sunlight, etc. and it kept coming up black but I should add my eyesight ain't what it used to be. Decent dark tan cap with lacing following about halfway down the glass.

Cinnamon, vanilla and cocoa are present in the nose but in a diminished fashion. More of a sense of chocolate overall with a touch of roasted grain.

My first taste impression was dark chocolate and after my palate adjusted I began to notice touches of cinnamon and vanilla. I also found a bit of roasted grain bitterness in the aftertaste.

L---Darkest, opaque brown. A fairly aggressive pour led to a medium sized light brown head. Head quickly faded down to a ring with islands. Very nice lacing. Much better than expected for such a high ABV.

T---Same as the nose. But a little bourbon shows up, thankfully.

O---Excellent beer from an excellent brewery. I had high expectations for this one and they were met.

This beer pours black and is topped with less than an inch of tan head that leaves decent lacing.

Cinnamon, vanilla, chocolate, and coffee aromas. Hints of booze as it warms.

Cinnamon right off the bat. The vanilla is subtle. I get some chocolate. Hints of coffee.

I knew this would be my least favorite variant. I am not a big cinnamon fella. Too much cinnamon for my taste.