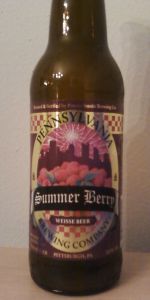 Appearance – The beer pours a hazy orange amber color with a two finger white head. The head has a decent level of retention fading to give a lighter level of lacing.

Smell – The aroma is of sweet berries and a little bit of biscuit. The fruit is heaviest of a raspberry aroma with some lighter notes of blueberry and strawberry. Sweet and fruity.

Taste – The taste starts out of a wheaty and bready flavor mixed with some lighter berry sweetness. The sweetness gets stronger more towards the middle of the taste with the raspberry being he strongest. In the end a yeasty flavor joins the sweet and wheat and leave a lightly sweetened berry flavor to linger on the tongue.

Mouthfeel – The body of the beer is on the thinner side with a carbonation that is average to above average. The lighter body is nice for the berry and wheat flavors of the beer with the carbonation level making it quite drinkable.

Overall – A refreshing berry brew. Very easy drinking, not too sweet and rather authentic fruit tasting. Not too bad.

Received this beer in a Pennsylvania Brewing sample case that I bought for a picnic, and as I had all the others (pilsner, koelsch, pale ale, and weissen) , i'm reviewing this one as a toast to the founder of Penn Brewery, the tied brewpub, Tom Pastorius, who passed away recently and was the father of craft beer in Pittsburgh. Did not know Tom other than to see him at the brewpub, which opened while I was in college here, and the rest is history. Never put out a bad beer, and was also a fun joint to visit. So raise a glass to Mr. Pastorius.

Not a big fan of fruit beers, so don't have a lot to compae it to, but I'd generalize and say it's a good summer beer. Poured into a pint glass, nice head, nice and pronounced berry aroma, and drinks very smooth. The berry taste s prominent, but not overwhelming or cloying and it's very drinkable. I prefer the Penn Pilsner or Penn Dark or my favorite, St. Niklaus Bock, but not a bad choice as a summer beer, They sell the beer at PNC Park, so try it if you visit. A salud'.

Smells of sweet raspberry and general artificial berry. Not much malt screaming through other than some biscuity aroma. No hops discernible.

Fresh raspberry and blackberry skins with some artificial blueberry. No off-flavors present. Just a blatant showcase of fruit flavors that a mildly biscuity malt has been almost blindfolded. Light rigidity to counter the fruitiness in the finish that leads me to believe I stumbled upon some hops.

Drinks easy. Medium carb and pretty much medium body. Nothing to talk about.

One of the lower-tier Penn brews, but I see what they were going for. Not a bad fruit beer, I guess. But, a lack of showing from the malts makes me shrug.

Poured a 12oz bottle into a shaker pint

A: Pours a pinkish cloudy amber with a beige-pink head. The color reminds me a bit of grapefruit juice.

S: Berries. Lots and lots of berries. I could pick up a bit of the wheat aroma

T: The berry flavor was not quite as pronounced as I would expect from the aroma. Definite wheat taste. Not much yeast flavor. I realize this is not a hefe but I still expect a bit of yeast flavor in a weisse.

O: A refreshing beer. Would go down easy on a summer night.

Couded orange hue with a bright white head, forms a thine layer of lacing. Aroma is screaming with berries good summer beer for a nice marketing campaign I've had it several times and I'm still not satisfied by it. Pretty horrid sweet artificial berry flavor might as well drink something worthwhile like their hefeweizen. Moderae carbonation medium to light bodied gotta love the Penn brewing company. Overalll level of drinkability would be interesting which is limited at best, give me good beer with their next seasonal I'm interested in their imperial pils due out.

Pours a hazy orange-ish to pink in color with an off white head. In the aroma, fruity berries and wheat notes. In the taste, wheat like notes and notes of berries, sweet to dry. A smooth and medium bodied mouthfeel, with a small dry hint of berry in the aftertaste. EH! decent wheat with a note of fruit.

A -Reddish hue, somewhat cloudy, little floaters
S More beer than fruit beer. Not what was expected
T - Bland, waiting for berry that never came through
M - Nicely carbonated
O - Lacking in the flavor department. Good for a beer, but not a fruit beer...

I saw this at a beer festival and it seemed very popular so I had to try it myself. I picked up a six pack to try a taste. It is shown as a very raspberry and fruity beer but it wasn't what I expected. I was waiting for a mouthful of berries that never came. It simply tasted like a pilsener beer with an attempt at adding berries. I wasn't blown away by it by any means but it wasn't an awful beer- just not very berry.

A- Strange purple/pink color, very cloudy with lots of sediment floating around it. A thick pinkish head floats on top and fades quickly but leaves little lace on the glass.

S- Mostly raspberry and not to much else that I can pick out.

T- Fruity but not sweet, raspberries and maybe strawberries are the dominate notes. A little malt to balance things out, but not to much else going on.

M- Light in the mouth and with decent carbonation. A little tart and dry at the finish.

O- Kind of like a fruit smoothie beer, the 11% ABV is hidden but it’s just OK at best.

Pours cloudy, pinkish yellow, not much of a head or lacework. Smells like fresh raspberries and a porportion of wheat malt. In the flavor, light bitter raspberry and a wheaty citrus twang. Alittle better than I predicted it would be, semi-refreshing. Mouthfeel is moderately carbonated. Overall, its an OK fruit beer at best, why bother.

A - A bit murky berry pink. I kind of shuttered as the bottom of the bottle poured a bit of sediment into the glass. Unfiltered. A nice half inch of head with a bit of murky scum on the top. Will have to try to pour this without the sediment.

S - Smell has a hint of raspberries with a touch of strawberry and grainy lager smell.

T - Well it's pretty watery and raspberry is one dimensional. Could possibly used more hops. Still kind of refreshing.

Overall glad I tried this before flopping over the 31+tax on a case. It kind of reminds me of Berry Weiss from Lennie only no bitter loganberry which is much of a let down. Worth a try but not worth a six pack.

Well, once again, I had to try a fruit beer. I keep thinking at some point, a company will make a nice complex fruit beer that isn't too fruity...a game changer.

This was not. Sure, it wasn't too fruity, I guess that was a plus. But it smelled like cheap American beer, with maybe a tint of berry. The taste was the same.

Poured nicely into a pilsner glass, a little foggy, lots of head.

I could see girls drinking this. It has a nice drinkability.

Overall, it just wasn't very enjoyable..As it is drinkable, I would drink it if it was the only beer available, but would never purchase a case. This was a single bottle purchase...

Pours a clouded pink tinted amber? Can't really place the color, but rest assured this beer has beery added and lots of it. A large stack of bubbles settles to an solid half in mass and hangs around. Only sporadic patches of droopy lace. Lots of yeast at the bottom of the bottle, decant carefully.

Light crispy body. Definitely has a wheat beer feel, with pale malts giving some sweetness to a tart fruity blast. Lots of raspberry tartness on the dry finish.

This more a fruit flavored weissbeir but i couldn't find that in the beer choices when i added. Feel free to re-categorize appropriately


Summer Berry Weisse from Pennsylvania Brewing Company
Beer rating: 75 out of 100 with 34 ratings