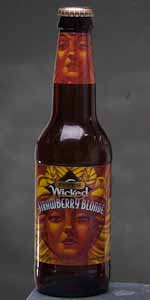 Poured a light lemonade shandy like appearance, lacking clarity, this was one of the first beers that didn't look like "beer" in my youth as much as the standard yellow stuff at the time, it had a mild pink hue to it and a smaller head. The aroma had strawberry like presence coupled with some grain feels.

Taste was one of the sweetest beers I ever had at the time. Light blonde ale like base here. Pumped up carbonation it seemed relative to the lack of beercentric (non adjunct) ingredients. This was the first beer that took on the lady might dig it notion of beer. It was something that I could still drink if I had to, but was better off in the cooler as something for someone else, like the beginnings of what it felt like to be a beer DJ (without living in a basement).

Bottom line, this didn't impress as a fruit beer, taste or aroma, and given the notorious brewing problems with real strawberries, I doubt that is what was used.

It still looked good for a retired beer with a medium amber-copper color, loads of upwardly mobile carbonation and great clarity.

The aroma is strawberry forward with vaguely roasted malts on the backside and a touch of hops.

The body was medium and very creamy or smooth.

The strawberry was more downplayed in the taste than in the aroma but there is an overpowering malty and buttery flavor going on. Like I said, I have no idea how old this bottle was but I thought it was decent enough.