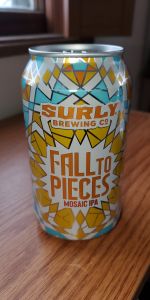 Notes: Our Mosaic masterpiece puts juicy, tropical hops at the forefront of this light-bodied, delicious IPA. Notes of mango, honey, and papaya entice, along with a dank hint of green fruit.
View: Beers
Reviews: 6 | Ratings: 15 | Log in to view all ratings and sort

Appearance: Pours a clear, light orange color with a creamy-white head. SRM of 8. (3.75)

Aroma: Aromas of pineapple juice, green melon, honeydew. A little bit of mango & papaya like the can says. Tropical and classic for Mosaic. Then some cinnamon spice aroma comes off the end. Very green and cinnamon. Like a cinnamon mint. (3.75)

Flavor: Flavor follows the nose with pineapple and grapefruit juice w/ light mango. A bit of mango flavor for sure. Then green melon and honeydew before a mild cinnamon spice comes through on the end. Not very bitter. Finishes relatively light, and clean. (3.50)

Feel: Lighter-bodied. Decent carbonation. Clean and crisp on the palate. (3.75)

Overall: A lighter-bodied IPA. Lighter Mosaic qualities. Pineapple and green melon. No dankness or berry. But there is this touch of cinnamon mint which I found a bit unique. I wonder if anyone else gets cinnamon in here. Either way, it's nothing to go out of your way for, and I probably won't buy it again. Still, a decent IPA. (Final Rating: 3.60)
*Compare to Unraveled?*

Overall: Picked up the Surly thaw pack and was looking forward to this beer as several raved about it on the message board. It was solid but not spectacular, maybe 2 months of age was too much. I like mosaic beers and this was good but not great.

Has a very slight haze but otherwise looks like a proper IPA. Plenty of spotty lacing is left down the glass. Slightly dank aroma with notes of tropical fruit and citrus and maybe a little pine. Bitterness is rather mild with the finish being slightly sweet. Nice hop flavors of tropical fruit and citrus. Flavor and feel makes this beer deceptively light considering its ABV. I do like the carbonation.

S-Interesting aroma of kiwi, papaya, tangerines and a touch of floral pine.

T-Resinous notes mingle with the fruit notes mentioned above...a touch spicy....interesting flavor....none of the berry notes I usually get from Mosaic. Good flavor though.

12oz can. Stamped canning date is '12/12/19'. From the variety pack called "Thaw Pack - In Thaw We Trust".
Partly cloudy, gold colored body. One finger of white head upon pouring sticks around as creamy and small bubble cap. Leaves behind scattered sheets of lacing.
Aroma of fruity and floral hops. There is also a touch of dankness.
Taste is soft, with tropical fruit and sweet honey flavors. During the last quarter of the taste profile there is a mild dank bitterness that appears. Overall bitterness is low.
More than medium mouth feel. Has a soft and coating texture. Excellent carbonation.
"Light bodied and delicious" as described by Surly. A real fruity and medium sweet IPS, without prominent bitterness. Easy to imbibe, and alcohol is nowhere to be found.

Fall To Pieces - Mosaic IPA from Surly Brewing Company
Beer rating: 88 out of 100 with 15 ratings