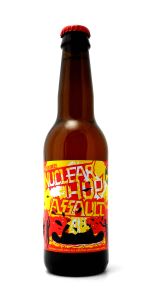 Reviewed by lmaduells from Spain

4/5  rDev -0.7%
look: 4 | smell: 4 | taste: 4 | feel: 4 | overall: 4
this beer n expected more. The beer is fine, it complies with the style standards and has the quality of a good brewery. But when you see an etiqeta like the one with the bottle and a name like the beer you are waiting for an extreme beer. And it's not an extreme beer. Unhealthy marketing
Dec 04, 2018

4.05/5  rDev +0.5%
look: 3.75 | smell: 4.25 | taste: 4 | feel: 4 | overall: 4
Pours a hazy golden/orange color with a fingernail length bubbly white head. Not much retention on the head.
The aroma starts off simply but grows in presence. The first impression is mainly of grapefruit rind, hinting at bitterness to come. Throughout the session, aromas open up, yielding floral, grassy and piny tones that gradually increase in fragrance. A cracker and biscuity malt presence also develops and adds sweetness. In the final phase, tropical aromas interplay with herbaceous danky tones.
The taste starts off so simple and clean. Dry crackery malt with grapefruit pith, not bitter, yet not sweet. However, the “hops assault” develops gradually, its initially clean bitterness combines with light piny and grassy flavors. Yet, the bitterness increases, especially in the finish, which provides a lingering resiny aftertaste; it all interplay’s nicely with the grapefruit flavors like a good old fashion west coast IPA. Adding complexity, tropical flavors of pineapple, mango and passion fruit add juiciness and combine with a subtle malt sweetness.
Medium bodied and nicely crisp. Dry palate, high bitterness and alcohol well masked.
With all the sweet and non bitter NEIPAs I’ve had lately, it was nice to have a hop bomb that was bitter to boot. I like how it developed.

Reviewed by Bombelsky from Poland

Reviewed by qrazvan from Romania

3.96/5  rDev -1.7%
look: 3.75 | smell: 4 | taste: 4 | feel: 3.75 | overall: 4
Light yellow colour. Intense hoppy smell.
The taste is dominated, as expected, by the tons of strong aromatic hops. Grapefruit and citrus also, but less obvious.
A NEIPA style beer with a lot of herbal aromas in, but the overall bitterness is somehow its drawback.

Reviewed by rolltide8425 from Pennsylvania

8% ABV. Imported by the Shelton Bastards (boy how I wish Mikkel would leave them - even for Twelve Percent LLC). "Imperial India Pale Ale brewed with Hybrid Hops."

Ample yeasty sediment is plainly visible about the bottom of the bottle as I pour.

It's merely mild in terms of aromatic intensity, and it's hardly as hoppy as you might expect a beer branded "Nuclear Hop Assault" to be. I'd chalk that up to this perchance having been an old bottle shipped across the Atlantic, but then the best before date invalidates that justification.

No off-notes. No booze.

TASTE: Fruity and floral, though not juicy or particularly expressive. Not resinous, piney, herbal, grassy, or even evocative. There's some pale malt in play, but overall this is awfully shallow and simplistic...I didn't expect that from Mikkeller.

It's surprisingly muted and reticent, lacking any vivid hop notes whatsoever. Then again, I guess I'm glad it's not imbalanced; somehow, Mikkel manages to avoid making this too bitter.

Not oily, gushed, hot, boozy, astringent, harsh, or rough. There is some alcohol warmth, which shouldn't be there in an 8% ABV brew.

OVERALL: Say what you want about Mikkeller (and many {almost predominantly American} drinkers like to shit on him), but he isn't known for shallow, timid brews. With that in mind, what is this? I didn't expect a beer called "Nuclear Hop Assault" to drink like an aged "West Coast style" (if that's even a true substyle) pale ale. I expected a polarizing beer - not a forgettable one.

the color is amber with slight haze and thick white head with fine bead. The smell is fruity grapefruit -like hops with mild herbal aroma and gentle tropical fruit accent with slight mango and gentle orange quality
to be continued

T - Very big open, floral, with a honeyed middle, and a moderately bitter end. Probably faded, but not unpleasant even so.

M - Bright and slightly spiky, but not brutal.

O - A hop front worthy of its name. The beauty is to end without blasting out the palate, and this one manages it. Not necessarily complex, but interesting nevertheless.

Pours hazy pale golden with a medium head and medium carbonation. Smell is pine and catpiss, very very piney. A hint of floral sweetness in the background.

Taste is bitter hoppy resin and pine with a stronger emphasis on the floral sweetness. This is the older school non-tropical style, and I like it.

Mouthfeel is dry and resinous. Good beer. I like it. I'd probably like it even more if it was fresher.