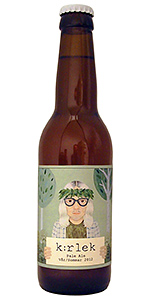 A: Light orange-yellow color with an opaque hazy body. The beer pours with a white head, tiny bubbles and good retention. Should have a more clear body.

S: Faint smell of malt and floral hops. This area needs a lot of work.

T: Nice strong hoppy bitterness that smacks you right at the start. The beer has a great citrus and floral hoppy flavors along with a lingering malty sweetness. Could use a bit more character.

M: The beer rolls over the palette with a nice light to medium body and sharp carbonation that accentuates the hop flavors. Could use a bit more body.

Overall I really liked this Pale Ale and I think the Mikkeller brothers have hit another style on the head... minus the smell/aroma.

This beer pours a hazy dark golden hue, with three hefty fingers of dense foamy ecru head, which leaves some nice hoar frost lace patterns around the glass as it slowly ebbs away.

The bubbles are fairly sedate, laying low for the most part, the body a sturdy medium weight, with a soft, appealing smoothness. It finishes pretty dry, the leafy, herbal hops closing things down, with very little lingering malt feedback.

A drinkable enough hoppy pale ale, but a bit too astringent to warrant more than a couple, maybe, as the hops indeed have punch, but no unifying force, one that lifts, rather than spreads (the individual hop essences, I mean...)

Had this one on-tap at Mellow Mushroom, 16-ounce pour in a shaker pint.

Appearance was a very clear straw to golden, nice and bubbly with a firm white head and good lacing. Something about the color hinted at the dryness, perhaps the bubbles lent it a champagne character.

The aroma was clean, fresh, and on the light side, with malt, grain, a bit floral, and a hint of fruit/citrus. Aroma could have been a bit more present, but it's very good as-is.

Taste was fairly fantastic and yet understated. I found the balance of this beer to be exceptional. I confess a bias toward this exact type of IPA - moderate alcohol, very balanced, not over-hopped, floral, and dry. On the front there is a bit of grain and malt, then the floral hops come in, but it's the finish where this beer really shines.

Mouth feel is in line with the aroma and flavor; just the right amount of body and sparkle to match the taste perfectly.

Overall the more I think about this beer the more I want to have it again. There is just a caring, well-crafted character to this beer on the whole, where each characteristic compliments all of the other in perfect harmony.

S- Mandarin oranges, grapefruit, lemon zest, some bitter pine and a touch of caramel. It almost smells as if it had rye in it instead of oat. Seems a touch on the spicy side on the nose. It compliments very well.

T- Bitter pine, sweet mandarin, grapefruit juice and some honey. Slightly spicy. The Citra and the Nelson Sauvin hops are definitely noticeable and seem to POP.

M- Light to medium body, nice chewiness and a touch of carbonation zing on the tongue.

On tap at the Dupont Paradiso yesterday. What an excellent beer.

Pouring a mildly hazy orange with a dense, white head with good retention and some lacing, this looks good. The nose is just an explosion of hop aroma. An incredible amount of tropical fruit flavor is present with mango, papaya, peach, pineapple and citrus. The malt character is reserved, at least on the nose, with some dough and a little bit of honey. A little yeasty, this just smells like summer. The palate is similar in that it still does lean very heavily on the flavor hops, and with a relatively tame and clean bitterness. Plenty of fruit, including some passionfruit, peach, mango and pine are present. While not really malty, the oats do contribute to a larger (and smoother) than expected mouthfeel. While I do enjoy the heft, I'm not sure the smoothness really does work here. There's also a yeasty frothiness to the palate that does detract from the feel. Medium-light in body with moderate carbonation, this beer is very, very good.

The beer pours a relatively clear, medium amber crowned by a thin, pocky, white head. There is no lacing and terrible head retention. The nose is semi-sweet with a modest amount of tropical fruitiness from the hop profile. The beer's aromatics are pleasing, but not as intense as i had hoped. I'm underwhelmed. The taste falls short as well with modest, fruity hops and a weak malt base. The mouthfeel is proabably the worst part about this beer because it's far too thin and isn't nearly as sweet as I prefer (just my preference). However, I understand this is only an APA and not an IPA or DIPA, soI can't expect them to go over the top with body, sweetness, and hops...but I think zombie dust is leagues ahead of this beer. For the price I will never try this again. A half-growler of victory ranch R @ premier is half the price and twice as tasty.

Thanks to Jim at Sherbrooke for the sample. From a 330 ml brown bottle. Pours out a cloudy apricot hue, with a tall frothy ivory head with a great deal of retention, and drops very slowly.

Leafy, herbal hops dominate the flavour up front, and pretty much steal the show. Mild citrus in the background that gain more momentum towards the finish. Sharp astringent character on the finish and into the aftertaste that dries out. Malt remains shy....

Probably the most impressive aspect of this Pale Ale is the mouthfeel, it has some depth to it. Medium-full body, smooth yet dense texture, dry, with a moderate carbonation.

The wheat and oats do their part with the big fluffy head and and in enhancing the mouthfeel, however in the end the flavour turns out to be a mish-mash of hops that lack cohesion and offer more bitterness in the end than flavour. The Columbus dominates, followed closely by the Simcoe, but once again, in the bittering aspect rather than providing flavour. In the end it seems more like an experiment rather than a finished product.