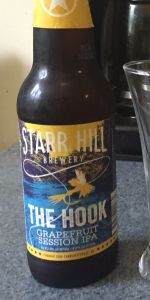 Notes via stream of consciousness: So does this have grapefruit added to it? The neck label mentions "real grapefruit zest" but there's nothing listed on the body label. It's poured a bit darker than I'd imagined it would be, it's a very hazy amber/copper color beneath a creamy yellowed off-white head. The aroma is not nearly as grapefruity as I'd thought it would be either, and the caramelish malt comes through clearly. That's OK, but I figured since it's called a "grapefruit session IPA" that there'd be more than just a little bit of citrus in the nose. Moving on... the flavor offers much more grapefruit but it's still limited considering the name, and again, the caramelish and bready malt is equally as strong. That's nice though, it's balanced. I'm wondering now if it's cheaper to use grapefruit zest than it is hops because they could have easily gotten this much grapefruit with just hops. The grapefruit balances the flavor of the malt, and a very firm bitterness balances its sweetness. It's not overdone though, maybe in the 40 IBU range. In the mouth it's medium-light in body and gently crisp-then-smooth. It's nice, balanced and easy to drink, but at the same time I feel it's a bit lacking as it's really got just two notes to it. Three if you count the bitterness, and maybe four if you include the mild leafy hop note that comes up in the finish. But, again, it's nicely balanced and drinkable and clean so who can complain. My only other note that the head had better than average head retention, but not great, and the lacing was about average.
Review# 6,173

O: A solid grapefruit session. Good flavor and bitterness... nice low ABV. Great summer beer. For what it is well worth it.

My salutations to whomever built this one in the site's database! You must go by everything imparted on the label & this is perfect. I am a friend of the brewery & as such, they send me various beers for review, especially CANs. Yep, this one came to me in a CAN for furtherance of The CANQuest (tm)!

From the CAN: "Real grapefruit zest complements bright citrus hop character and a sessionable body brings you back for more."

It was a brewery fresh CAN, so I went with an inverted Glug following the loud Crack! I watched in rapt fascination as the head came rushing up until I simply had to back off. It formed just over a finger of foamy, soapy, tawny head with moderate retention. Color was an oh-so-slightly-hazy Amber to Deep Amber/Light Copper (SRM = > 9, < 13). Nose smelled of grapefruit, but lightly. Here again begins my call for Session APAs & Session AIPAs to be their own separate style. How CAN this measure up to something like Sculpin, for instance? Mouthfeel was thin-to-medium, not exactly watery, but thin for the style. The taste was slightly bitter, easily recognizable as grapefruit, but lacking the punch or Ooomph! that is a hallmark of the style. I was not getting Hooked on this one. Finish was semi-dry, refreshing, but like a broken pencil - pointless. I just felt unfulfilled by it.

You really have to pay attention to get the grapefruit out of this. It's a pretty ok session IPA. Would I buy another case of it at the local warehouse club? No. Would a gladly drink one that someone offered me at a cookout? Yes.

Smell: Smell of pine and citrus.

Mouthfeel/Taste: Smooth medium bodied. Taste of bitter pine with a hint of grapefruit.

Overall: Good IPA. I would have this one again.

This is an easy beer to partake in. There's a nice hops/citrus marriage, the feel is light and crisp, and it is straight up home townish for me which isn't always horrible but rathering safe and reliable.

Quite possibly one of the worst sessions i've had. Stale malts & grapefruit syrup own this drink. Very disappointed in Starr Hill these days - not even the best brewery in Crozet. Big let down.

A well done infusion of grapefruit to a quality IPA. I got this in their summer sampler pack and was expecting to be disappointed, as I usually do not care for the taste of grapefruit. This was very good however, smelled quite fruity but a very balanced flavor.

I'll address the first and most obvious point: this is not as good as the much more refined Ballast Point Grapefruit Sculpin.
HOWEVER, I would get this every time over it. It has a lot more flavor and is a bit more bold (in taste, mind you, not body or %alc). I ordered this with some friends and everyone took a sip and I had to order another because they had to keep passing it around! The fact that it's local and much cheaper than Ballast Point's offering puts it wayyyy above it.

Starr Hill has a way of putting out great beer, and they've done it again.

For a session IPA, this is a great beer. Don't expect something along the lines of Ballast Point's offering - this one is much lighter...but in a good way. Crisp, clean but still hitting the hoppy notes that one would expect in an IPA.

Poured from a bottle to a shaker glass. Light amber color with a thin white head, about half a finger deep. Smell is grapefruit, fresh cut grapefruit. Flavor is, to no surprise, grapefruit up front with a hint of pine, by mid-sip there is primarily grapefruit with a hint of bread, and finishes with a little grapefruit and bread. Finish is clean and quick, no flavors really linger. The beer is light bodied with a mild amount of carbonation. Very drinkable beer, would do quite nicely over summertime for a BBQ, fishing, camping, etc.

Clear pale tawny hue, good lacing all the way. Smells of grapefruit rind and zest, and dank hops. Smooth with a struggling crispness, a little thin and slick on the palate. Bready maltiness has a hint of caramel. Citrusy hops, grapefruit flavor melds well with the hop flavor. Middling bitterness, lands dry in the finish. A good stab at this variation.

On tap at T-Mac.
Clear copper body topped by a durable head. Good lacing.
Paired with a grapefruit IPA from Red Brick. The Virginia IPA was similar but a touch more bitter, less complex, and with more grapefruit and grapefruit peel flavor. Stronger aroma too. I did miss the orange notes present in the milder beer from Red Brick.
Medium body.

The Hook Grapefruit Session IPA from Starr Hill Brewery
Beer rating: 85 out of 100 with 85 ratings