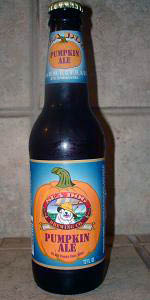 Reviewed by Cavanaghty from Maine

Overall: Don't bother with this one. One of the worst pumpkin beers out there.

Another screw-top bottle! I had no idea, so I prised it open for the Pop! Once I realized that I had been duped, I initiated a heavy-handed pour that garnered three fingers of foamy eggnog-colored head with light retention. This had a weak nose, reminiscent of the worst: Shipyard Pumpkinhead. Color was Yellow-Gold (SRM = 4 - 5) with NE-quality clarity. This called forth the Gelt Gang of Mammon, Midas & Croesus, all of whom wanted a taste. Mouthfeel was thin and watery. Taste was slightly spicy, but that was all. Did they mail this one in or clone the aforementioned Pumpkinhead? Either way, it was not indicative of their capabilities. Finish was semi-dry, begging the question of where were the spices? Either do it wholeheartedly or give it a pass. I should have given this a wide pass.

Reviewed by JWU from Pennsylvania

A- a muted gold/orange with a poor excuse of a head.

T- Watery, some mulling spices, and an odd bitter aftertaste.

Rated by DuffDaddy from Florida

Reviewed by misternebbie from Pennsylvania

Jul 19, 2014
Rated: 3 by Enriquehopnog from Massachusetts

O- This drinks like a light lager with some artificial pumpkin flavors added. This may appeal to the casual light beer drinking crowd, but there are much better options out there for a craft beer fan