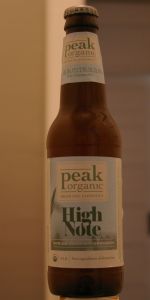 Poured a light yellow color with a 4F+ plus head. I did a direct pour, so the head was bigger.
This beer takes on character with warming. Okay with colder temps.

The aroma was very spicy, coriander, some lemongrass, and orange peel.

Light body. Almost too light, but it works well with the style.

Overall, a good Belgian wit. Deceiving at lower temps, so it's best to drink it 45+F.

The aroma has a goodly amount of coriander,clove, ginger, toasted bread, and lemongrass. It smells like it is supposed to.

The flavor has a big burst of herbs and a lemon zing with toasted bread underneath and a clean, lingering finish. It is a nice take on the style.

L - Bottle best by dated 10/04/16. Poured into a Treehouse tulip. Golden yellow with a 1/2 finger of foam. Minor lacing.
S - Nice strong aroma, malty with a citrus and herbal backing.
T - Rich and complex. Malty backbone, orange peel and of course lemongrass. Kind of reminded me of Hitachino Nest's white ale.
F - Smooth and refreshing. Strong carbonation at the tip of the tongue to finish.
O - Better than average Belgian Wit. Although I prefer Super Fresh, this is high on my list of go-to beers from Peak Organic. Try it, you won't be disappointed.

First beer I have ever had from this particular brewery. Considering their brews are said to be organic, obviously I went into this tasting very excited & optimistic. After all, who wouldn't want to try an organic-ingredient-based beer? Well, I know that it catches my eye, and that's enough for me. I chose this specific 6-pack because it was a witbier and I enjoy them. Smells of a standard witbier, reminds me of Hoegardden. Where this beer stands out is how it has that minor minty-ness to it. Perhaps it has to do with the lemongrass, but whatever it is, it works for me. Part of the reason I bought this beer, aside from it being a wit, was that it was brewed with lemongrass. I mean, seriously, how many other beers do you know of that incorporate that specific ingredient?

So, what is the final verdict? Well for me, it all comes down to the classic, old-fashioned question: Would you buy it/get it again? Yes & yes. I would even go as far as to bring a 6-pack of this to a social event of when I'm hanging out with friends. It is tasty, clean, and you can slug back a handful of them and not be slammed (all depending on your tolerance, of course). So yes, if you like Hoegardden, Allagash White, or anything of that sort, definitely try this one out.

Like I said in the beginning...its an all-organic beer. That sheer fact grabs my attention. I like where this brewery is going. And though it is an unrealistic thought for all breweries over the world to go organic (doesn't seem like enough available natural resources given the number of individuals whom drink beer), I still firmly believe at least some should strive toward going that route/direction. Good job, Peak Organic Brewing Co.

I have a number of Peak Organic beers, both bottle & CAN, awaiting drinking & review & I have decided to run through as many of them as possible yesterday & today.

Another screw-top bottle! I wish they would just fade out of existence altogether. I then gave it an agro pour since a) it was meant to be cloudy and b) these types of bottles irritate me. This raised a finger of dense, rocky, bone-white head with excellent retention. It looked like meringue atop lemon pie filling. Color was a cloudy Straw-Yellow (SRM = > 2, < 4). Nose had a definite twang, whether from the lemongrass, the spices and/or the malt, but it was lemony, peppery, even slightly musty. Mouthfeel was medium-to-full, not quite creamy, but quite prickly on the tongue thanks to the CO2 bubbles present. The taste reminded me a lot of the lemon tart that I had yesterday with Easter dinner. It was tart & lemony, sure, but there was also a peppery spiciness that went with it. The finish was a pleasant combination of lemon and pepper-like spice, with both coming through harmoniously. The availability shows it as a "Spring" beer, but the dry, refreshing finish made me think of hot, humid summer afternoons.

Taste: Follows the nose. Lemongrass is noticeable. Tasty. Has a lot of classic witbier traits. Refreshing and citrusy and lemony. I bet this would pair well with Thai food.

High Note from Peak Organic Brewing Company
Beer rating: 84 out of 100 with 22 ratings