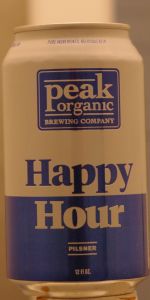 From a BOM club can into a pint glass. Poured with a 1/2" head of white foam and a slightly pale golden body with great clarity and effervescence. On the nose is a crisp pils style with a slight citrus zest. Taste follows with a well balanced crackery malt playing of the citrus hop. Feel is dry, light, crisp, with an ever so slightly bitter aftertaste. A very drinkable and refreshing summer brew.

Peak has some solid offers but this one fell short. Thin and had a taste just wanting for more. Your less crafty friends may be content with this one but for me this was not a good effort.

On tap at The Parched Pig. Clear golden. Smells of spicy hops, light grass, and some doughy malts. Taste follows. Mostly spicy hops and some doughy bread. Drops off in the finish leaving a spicy hop bitterness and little to no malt. A touch seltzery. Very light. Clean and easy to drink, though very light.

I have come to expect little from both Pilsners in general and Peak in particular. They are both perfectly mediocre in nature. This one proved me wrong.

The taste is feel is marvelously cool and crisp, a perfect citrus that only dances at the periphery and finishes clean. This might be a perfect summer pils.

a: clear light straw yellow with a hint of light amber. 3 finger frothy white head that fades to 1/2 finger

s: sweet crisp grains, grass and sweet lemons. lemongrass, pepper spice, and a huge crackery biscuity sweet malt backbone. a touch of cardboard at the end. this is quite a nice aroma

t: sweet grains and grass with some hay. a touch of lemongrass and sweet citrus. a flat lager note with a small touch of floral hops. a bit of a letdown from the aroma

m: lighter side of medium with moderate carbonation. a bit too flat for a Pilsner

o: aroma on this is really nice, but the taste and mouthfeel fall a bit short. it's not a bad beer, but it could be much better

Pours a slightly golden yellow. Smells faintly of hay and cereal. Taste leans in a malty direction with a noticeable bitter finish. Nice drinking for a low ABV beer with light to light-medium body. The kind of beer you can have a few of.

Comes in a clear bubbly straw color with a big foamy white head. Decent retention with some lacing. I.e., it looks like a pilsner ought to.
Smells like a very fresh and balanced pilsner. Fresh clean grass and zingy green pepper flesh meet cracked grain sweetness with a touch of honey and white tea.
The taste follows the nose precisely. A nice clean bite of herbal Noble hops; green pepper flesh, white pepper seeds, grass, and maybe green onion. Simple cracked grain sweetness, toasty cracker with a dollop of honey. The key here is balance. Most American-made pilsners rely on intense hoppy bitterness, this one here strikes a nice balance with a very Helles-like grainy sweetness. But, it finishes crisp and clean with a little tiny bit of that fresh grassy bitterness carrying over, but ends clean as water.
The feel is very well carbonated, light as in chuggable but not watery. Instead, a forceful carbonation feels full on the palate and moves the beer quickly.
Overall, this is a fantastic pils from Peak Organic that tastes like an authentic German pils. Well done!

Clear golden color , 2F head, with carbonation bubbles from the bottom of the glass. Served in Pilsner glass.

Strong fruit, esters in the aroma.

Poured into a pilsner glass, the appearance was a super nice looking golden yellow color with a nice transparency showcasing an ever so slight carbonation rising delicately to feed a two finger white foamy head. This head lasted about a minute before gently dropping off and a messy spotty lace wound around the glass.
The aroma melded sweet biscuit, small grassy hop spice sliding into a delicate earthiness, then a slight whiff of lemon, and ending with a touch of white pepper.
The flavor mainly sticks to the sweet biscuit. The lemon seems to slighter here than in the aroma, really - it's barely noticeable in the taste. Mobile sweet smooth biscuity aftertaste.
The mouthfeel was about medium bodied, maybe a touch under with a fine sessionability about it. Carbonation and ABV seemed good. Sweetness creates a fine smoothness along my tongue. The finish was semi-crisp with a fine sweet smoothness.
Overall, as a German Pilsener it works and definitely would be one to come back to.

Poured from a 12 oz. can. Has a light golden color with a 1/2 inch head. Smell is of grains, malts. Taste is mild, grains, some malts, not really picking up any hops, which is surprising from this brewery. Feels medium/light bodied in the mouth and overall, it is crushable, as the can states, but otherwise is a mediocre beer.

on draft in a shaker pint

And now, the aftermath of the Fourth of CANuly! I had laden my reefer with CANs that day, not really expecting to run through all of them, but more as a stopgap from running out before the day was over. The result is that now, I have a buncha cold CANs that I do not want to simply pull out & have get warm again. Ah, the trials & travails of The CANQuest (tm)! In this instance, I had purchased a duo-pack of Evergreen IPA and Crush IPA & since I seem to be immersed in Peak Organic B.C. CANs today, I figured to give this a whirl.

From the CAN: "Pure Ingredients, Delicious Beer".

Like the approved pic? Thank The CANQuest (tm)! I began with a loud Crack! and when it gave me a spritz across my fingertips, it was all that I could do to hold back from an inverted Glug. Sadly, my favorite Pilsner glass is not meant for that kind of nonsense, so I went with a standard Glug that still managed to raise a finger of dense, foamy, bone-white head with moderate retention. Color was Pale-Straw (SRM = 1 - 2) with NE-quality clarity. Nose had a peppery, Saaz-driven hoppiness overlain on a biscuity malt foundation, but I associate hop-first, malt-second more with the GER style Pils. Mouthfeel was thin-to-medium, just about what one should expect in the style. The taste was really lovely, beginning with an explosion of black pepper, like a Flash! Bang! grenade sent in to soften things up as it was followed by a lemon-grassiness and a biscuity maltiness. I would be reluctant to do so, but imagine cracked Black Pepper on Enrico's Lemon Biscotti from Pixburgh's Strip District. Oh my. Finish was dry, but not overwhelming. I imagine it to have a relatively-low ABV so it would be a great filler for the cooler, followed by the Evergreen & Crush IPAs. I am totally crushing this one! YMMV.

Picked up at Downtown Crown in Gaithersburg for a cool ninety nine coppers for a twelve oz. can. In Montgomery County, MD, no less. Sign me up. Nice solid sticky head atop a pale body accompanied by a little fresh baked bread note and a touch of banana.

The same slightly fruity grain and fresh biscuit note maintains but is accented with a touch of spicy hops. Delicate in body but very flavorful and strong for what I was expecting. Really nice, interesting pilsner. I'd be happy to drink these all summer, particularly for that reasonable price.