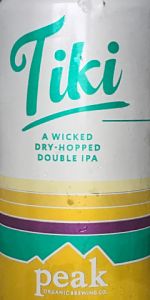 Notes: Tiki is a Double “Mai-Tai-P.A.”! We combine a hazy, hop-bursted New England Style Double IPA with the fun twist of a Tiki drink. Brewed with huge amounts of citrusy and resinous Amarillo, Citra and Mosaic hops, Tiki incorporates a dash of organic pineapple, orange, almond, passion fruit, cherry and coconut. We hope you enjoy this fun twist for hop lovers.
View: Beers
Reviews: 4 | Ratings: 11 | Log in to view all ratings and sort

A: The beer is quite hazy in color, but is barely translucent enough to observe a moderate amount of visible carbonation. It poured with a quarter finger high white head that quickly settled down, leaving a collar around the edge of the glass and some patches of bubbles on the surface.
S: Light to moderate aromas of pineapple are present in the nose along with hints of passionfruit.
T: The taste follows the smell, having flavors of pineapple and passionfruit along with notes of cherry, coconut and pine, the latter of which is most noticeable towards the finish. There is a light to moderate amount of bitterness.
M: It feels medium-bodied and somewhat crisp on the palate with a moderate amount of carbonation.
O: I found the mixture of tropical fruit flavors in the taste of this beer to be very enjoyable. The pine was a bit unusual, but it added a nice amount of bitterness to the taste and crispness to the mouthfeel,

A: Pours a hazy yellow color with 2 fingers of head that fades down to a nice cap

S: Citrus and tropical fruit up front along with some lighter earthy and grassy notes

T: A bit more mild, starts with the earthy and grassy tones reaching out more. Definitely still has citrus and tropical hops in there, but they come in more towards the end. Finishes with lingering tropical fruit notes, especially pineapple

O: A solid dry-hopped DIPA that is super easy to drink. Check it out

The flavor seems to shift from the sweet toned fruity aromatics to a much more, dry, peppery and earthy kick start. Grapefruit unsweetened, pineapple and orange rind plays around with your tastebuds and 'ol factory.

Light and grainy golden, pilsner-esque malt brings out the dry golden barley and wheat fields of summer straight into the glass as the John Barleycorn ghost makes damn sure the balance is decent.

TikI torch your tastebuds with fun.

I've had a few meh experiences with Peak's lineup of dry-hopped double IPAs, but overall I've actually generally found them slightly better than I expected based on other the reviews of others on this site. Maybe it's because Peak has varied in quality over the years so frequently and seemingly-randomly, but I think they tend to at least make some interesting beer. They could be a little more upfront about what exactly differentiates their beers (this is like the fourth or fifth 8% DIPA they make that looks exactly the same both in and out of can, with slight color differences on the can art itself), but whatever. Their website claims that this is an Amarillo/Citra/Mosaic dry-hopped beer with "a dash of organic pineapple, orange, almond, passion fruit, cherry and coconut." Interesting.

Pours a hazy (but not opaque!) golden color with some dirtiness to it. It's not a pure gold, in other words, but more like a yellowish-hue with some light orange undertones. Tight head of two-to-three fingers that sinks to about a finger after several minutes in the glass. Solid legs and decent-enough lace. Nothing special but definitely looks the part. I'll throw it a bone and say it's a solid 4.

The scent is a fruity and fun combination of pineapple, pine sap, mango, catty Citra hops, almond essence and a bit of tangerine/orange citrus peel character. Definitely pops out of the glass more than, say, their "Punch" DIPA. I'm amazed I actually get the flavors they added to this one when I bring it to my nose. It's tropical and juicy-smelling but also has a pinch of something odd going on, and that definitely has to do with the almond flavor. Perhaps the coconut is doing something here as well, but it doesn't stand out on its own.

Yeasty and aggressively bitter on the tongue right upfront, but there's a super well-balanced melange of mango, passion fruit, pine and grapefruit pith in the mid-palate that lands this right about where it needs to be. I get even more of that almond flavor here, but the pineapple pops out more as the beer warms a bit to closer to room temp. Crazy balancing of different things going on here. Floral and almost "West Coast"-y citrus/pine, but with some unique earthy, berry and dank notes from the Mosaic. Feel is soft and juicy with moderate carbonation and a really solid, punchy finish that details all of the solid flavors going on. Surprisingly great stuff here. Glad I got another can.

Tiki from Peak Organic Brewing Company
Beer rating: 90 out of 100 with 11 ratings