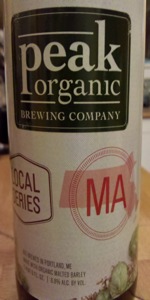 Notes: This series is a celebration of tasty local ingredients and distinctive terroir. We brewed four beers, each with barley and hops from one particular state (Maine, Vermont, Massachusetts and New York). Each beer in the series was brewed according to a similar recipe, to achieve an ale that is assertively-hopped and dry-hopped, but also bold in its malt character. Since the recipe is consistent, the flavor difference in each beer results from the distinctive local terroir. Working with skilled farmers to craft this series has been an exceptional experience for us. We hope you enjoy the result.

Poured a hazy amber hue with a one finger frothy white head. There was good retention and very good sticky lacing.

The smell featured sweet malts and an earthy grassy hop.

The taste consisted of an unusually sweet malt for the style with tones of honey and candy sugar. Herbal and grassy hop notes do little to clean up the flavor.

A: Golden-orange in color with hues of brown. Hazy. Rocky white head retains well and leaves thick webs of lacing all over the glass.

S: Hops are floral and very earthy. Wet leaves, tea, and a mild fruitiness. A touch herbal and spicy. Big whiff of caramel and butterscotch. Faint grains and a ghost-like woodiness.

T: Hops are earthy and spicy and reminiscent of teas leaves and herbs. Malt tastes are sweet and honeyed with tastes of grain and a wave of caramel. Butterscotch and a mild buttery taste suggest diacetyl. Finishes with a earthy hop tastes and caramel.

O: This is the best of the local series I've had to date. The hops in particular are nice. That ringwood yeast still gets to me though. The buttery/butterscotch tastes really turn me off.

This Local Series was a hazy amber color with a relatively small tan head and a wee bit of lacing.

More on the subtle side. Not too aggressive, more mellow. I liked the citrus hop presence.

From the 22 fl. oz. bottle. Sampled on May 28, 2012. I think that this is an interesting concept. They brew with the same recipe but use ingredients from the state listed on the label. Basically the beer tastes about the same. The pour is medium amber with a long-lasting off-white head and good carbonation. The aroma has some interesting ingredients including sweet malts, yeast, and a warm weather hop sensation. The body falls into the medium range but it is also creamy. I have had other beers from this series and there is a consistent sweet malty character in the taste along with butterscotch and low bitterness. This beer is something that could easily be enjoyed on a warm day with a barbecue.

A: pours a clear reddish copper color with a thin tan/white head, leaves behind a sticky lace, the top of the brew looks thick and sweet

S: malty sweetness and a nice hoppy note from the dryhopping, citrus and a slight piney note. I should have enjoyed this one sooner as the Malts are showing their age.

T: a nice hoppy pale ale, the hops showcase nicely, but the Malts are clearly aged a bit, slightly chewy

O: a good pale ale that I should have opened when it was fresher.

A: Pours a clear copper color with a relatively thin off-white head. The head on this beer reduces to a thin layer of bubbles with a thicker ring around the edges of the glass pretty quickly. Significant lacing is observed.

T: The big hop flavor balances nicely with the malts. There are slight hints of toffee, citrus zest, and caramel.

M: Medium bodied with light to moderate amounts of carbonation.

O: Easy to drink and enjoyable. Very nicely balanced in both the taste and the smell. Definitely one to have again if I come across it.

A: The beer is slightly hazy yellowish copper in color. It poured with a half-finger high off white head that died down but left a patch of bubbles in the center of the glass and a ring of bubbles around the edge.
S: There are moderately strong vinous aromas of grapefruit hops in the nose.
T: Similar to the smell, the taste has flavors of grapefruit hops along with hints of pine resin and a very slight amount of bitterness.
M: It feels light- to medium-bodied and a bit chewy on the palate with a moderate amount of carbonation.
O: This beer is very flavorful compared to other beers in the style but is relatively easy to drink.

My companion while brewing a maibock lager.

Bright Halloween orange. Quick to fade head ends up with fair retention and lace. A twist top bomber - don't see too many of those.

Big herbal hop balances out the crystal malts nicely. I guess that balance is the point (or at least the main point) of a pale so Peak succeeds in that aspect. Scotch-like toffee flavor.

I was on a Peak kick after their Oak Aged Mocha (that tastes like maple sugar candy!) but I think I'm done with that now. It's not bad, I'm just not a fan of toffee heavy pale ales.

Thank you to GoGriz for this bottle.

Pours a clear golden orangey glow. Light reds or garnet find there way into the glass. A tangerine zested 1/2 inch fluffy head sits gently on top of this beer in a tulip glass. Tiny bubbles dance from the bottom of the glass in steady steams.

Some lemon peal, tangerine, some pine needle, all rounded out with a semi sweet caramel.

The mouthfeel is good, small bubble carbonation with no viscosity holding it down. The finish lingers a little and then drifts away cleanly.

Overal a good American Pale Ale. I like the ingredients were organically grown in MA, I'd like to try the other states from the "local series" to see how they differ in terroir.

Yes, I deliberately timed my sampling of this MA beer for the 2012 Patriots AFC Championship game. Yeah!

Poured a 1.5" beige head with decent retention. The body is a slightly hazy burnt orange color. It smells more of malt than hops. The taste mirrors the smell with toasted malt and mild but zesty hops. There's a citrus zest aftertaste to the hops and they have a low grade but constant zinging burn in the throat. Quite a nice beer.

Local Series MA pours a clear amber color with a big, fluffy white head on top. The foam dissolves quickly to a thick ring around the surface leaving behind a netted pattern of lace on the glass.

The aroma is sweet with notes of toasted malt, caramel and lemon meringue.

Each sip of this medium bodied beer is slightly chewy, dry with soft, moderate carbonation. The flavor is sweet with some lemon citrus mixed in. It begins with caramel and pale malt and a touch of tropical fruit, like mango. Towards the end lemon citrus and some grassy notes take over. It finishes mildly bitter with a lingering taste of caramel and lemon.

This is a tasty beer that's more malty than hoppy.

Relatively sweet pale ale. There's a good hop kick in the swallow, providing a moderately lasting aftertaste. Full bodied with a modest level of bubbles. Overall, the flavor leans toward an Amber Ale because of some of the lightly toasted malts.

Smell: Interestingly given the dry hopping, the nose is dominated by malt – mostly buttery biscuits, but also some more generalized grains.

Taste: The taste is not inconsistent with the nose, but it’s definitely not what I expected given the characterization on the label as an “assertively hopped ale”. The malt continues to control, although mildly spicy hops now slip in through the back door and helps with the finish. It not unbalanced, but I definitely expected a bigger hop profile.

Mouthfeel: Medium bodied, although it feels slightly heavy at times given the prominence of the malt.

Drinkability: Fairly drinkable, and you could session this, although there are definitely others that I might choose before this one.

Finally found the MA version of this series. Interesting to see the differences between them ("terroir"). The hop profile is very interesting on this one. Not as hoppy as the NY, but distinct spice characteristics. The malts are more prominent. They have less of a grainy quality to them here though. More classic pale ale attributes. Great mouthfeel. I wish there was a little more hops on the nose here, but otherwise, a darn tasty brew.

biscuity and crackery malts and herbal hops reminiscent of an English-styled pale ale.

herbal hops give off an almost harsh bitterness before the cracker and biscuity malts come in, followed by a honey-like sweetness that sticks on the palate long after the swallow with a bit of the herbal hops reminding me of honey-sweetened black tea, served with crackers of course. hmmm... i feel like i'm in the pre-revolutionary days.

a bit harsh on the palate at first with an abundance of carbonation that quickly settles to a smoother, slightly oily finish.

I actually enjoy it. This is another one of those "concept better than actualization" beers, but I enjoy the beer as it is.

The concept, however, is pretty interesting. However, it would be better to have the collection to taste side by side to notice any differences between the hops and malt grown in different Northeastern states and if there is a discernible difference in the "terroir." Keeping the recipe the same, it would be neat if they took it one or two steps further and used water from the particular state, and then cultivated yeast from each individual state. But that may be a bit harder and too expensive for a concept that is interesting, but not overly so.