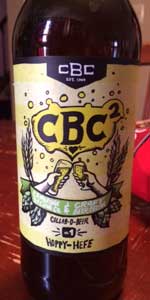 Notes: IPA with Massachusetts wheat malt and fermented with our proprietary HefeWeizen yeast strain. Brewed in collaboration with our friends Kate and Suzanne of the Craft Beer Cellar.
View: Beers | Place Reviews
Reviews: 5 | Ratings: 44 | Log in to view all ratings and sort
Reviews by Dope:

Just found this at CBC in Westford. Appears to be quite old (May 2013?) from the reviews which is unfortunate. 6 month old IPA? Bleh. Let's try it anyway.

S: Nice. Lots of bright citrus. Sort of a typical citrusy hefe but clearly with some citrusy hops to go with it. Some cloves; mild. Decent bubblegum from the (presumably) hefe yeast. Overall a delicious aroma.

T: Lots of citrus again. Lots of cloves with a little bubblegum. Wheat malt with rye I assume? Pretty spicy on the back end, clearly rye (I think) but also peppery at the same time. Little wave of bitterness combines with and compliments the spiciness. Kind of a citrusy, floral hop aftertaste between sips.

M: Medium bodied and mild. A bit drying from the hops.

O: Very interesting hefe. Lots of citrus, lots of spiciness. Not very traditional in this sense but what do you expect? Not overly bitter but hop flavors are still nice. Pretty well balanced. Even the malt flavors are nice - I assume there's rye in this and not a small amount. I really enjoyed this, the hoppiness doesn't come off as gimmicky or overpowering - they serve to enhance the hefe's normal brightness and crispness. And it works.

From the 650 ml. bomber acquired at the Craft Beer Cellar in Belmont, Massachusetts. Sampled on March 23, 2014.

The pour is hazy golden yellow with an abundance of milk-shake foamy head. Can you say highly carbonated?

The aroma is a luscious amalgamation of freshly harvested wheat, barley, and floral, tropical hops. Each plays off each other well.

The body is light to medium but there is an acidity to it.

For the taste, the tropical character of the Mosaic and Galaxy hops tend to push themselves forward although the wheat can still be found basking in the fruit. Lets hope the two CBC's team up again.

Hazy golden-yellow color, with a full two fingers of foamy white head, that eventually settled down to a thick layer, lacing the glass. Despite the age, there was still a decent amount of hoppiness in this beer. Aroma of grass and grains, some light banana esters, light citrus, and some bubblegum. I'm not crazy about hefes in general, but being hybridized with an IPA kind of took the edge off this one for me. Citrus and grassy hops in the taste, the bubblegum-like hefe notes taking a back seat, toasted wheat and clovey spice. Not bad. Got pretty bland as it warmed, so I wouldn't drink this at any temperature below fridge-temp. Medium body, easy mouthfeel, higher carbonation.

Appearance (3.75/5): Huge white head tops a hazy bright yellow body, the typical color you would expect from a hefeweizen style beer. Tight bubbles and carbonation visible in the glass.

Smell (3.75/5): Very interesting. CBC Squared has a lot of that floral hop aroma going on, in combination with some musty banana-y yeast. Notes of orange peel and spice jump from the glass, too, but this show is dominated by duelling hop and banana-like aromas–AS IT SHOULD BE for a beer that's supposed to be an IPA-Hefeweizen hybrid.

Taste (4/5): Follows the nose, but even better. Big bitterness at the beginning from the citric and piney hops. Major hefeweizen/wheat notes and a great, semi-spicy, banana like yeastiness comes on in the finish. Moderate hop bitterness in the finish. This is quite a fruity beer: you get orange and grapefruit flavors from the hops, and a little banana from the yeast is thrown in at the finish. Despite this and the clash of styles, it's not an overly complex brew. This is good, because neither of the original styles–IPA and Hefeweizen–are typically very complex. This makes for easy drinking.

Mouthfeel (4/5): The mouthfeel is appropriately effervescent–more like a hefeweizen than an IPA since the carbonation is on the higher side of medium. The body is also appropriately medium-light, though people who like IPA's more than hefeweizens may want a tad bit more body. That's a small quibble. This is a highly drinkable beer.

Overall (3.75/5): CBC Squared is a really nice beer that's definitely worth a try. Combining the hoppiness of an IPA with the yeasty notes and lighter body of hefeweizens, Cambridge Brewing Co. and Craft Beer Cellar have created a really solid beer made for the summer weather. I thought it was really good and wished I had gotten another bottle.

(4.0) A: Hazy copper with an incredibly tall and marshmallow-like eggshell white head. Long lasting retention with a bit of noticeable lacing.

(4.25) S: Grains, honey, fresh grasses, cloves, banana, white grapefruit, and cane sugar. This reminds me more of a tripel as opposed to a hefe but definitely with a noticeable hop quality regardless. Incredibly fresh aroma that’s unique, powerful, and appealing.

(4.25) T: Very flavourful and fresh tasting with a wave of tropical and citrus fruits up front. Transitions into those fresh grasses, pepper, cloves, spices, and a slight acidic taste. A touch of floral qualities towards the end. Dry and with a resin-y bitterness in the finish. Excellent stuff overall.

(4.25) M: Medium bodied with a lively carbonation. Slick but not sticky and with enough resin.

(4.25) D: This was a very pleasant surprise and something I’ll certainly be keeping my eyes out for when I’m back in the area.