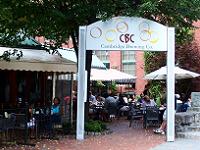 Notes: CBC was founded in 1989 in Kendall Square, Cambridge, where we've been crafting classic, unique, and experimental beers ever since. Thanks for supporting authentic craft beer! Cheers. Phil & Will
BEER STATS

Cambridge Brewing is located in a neat nook, Kendall Square, about 1.5 mi from Harvard. It was more of a pub restaurant style place that had plenty of outdoor seating. Inside the place seemed small....there was a small bar and some surrounding tables.....there was a hallway extending behind the bar that I did not explore....so there could be more seating than what I saw. The quality of the food and beers were very good. The service was kind and attentive. There was a decent selection of food and beer to choose from.....I had the smashed patty burger.....phenomenal.....put on your list to visit.

I've been visiting since they opened, and return 3-4 times a year, so I'm chiming in. A coupla days ago was my first Pandemic restaurant visit at the brewery with a friend. Outdoors of course, as I don't think indoors has been approved in Massachusetts.

Felt safe to me, the Beer Garden wasn't quite as pretty as is it was in 'the Before Times', lined with flowers and all, but it was great. The routine is, wear masks when entering, leaving, taking a leak, etc. Take it off at your table. Anyways, it was great to be out, but even better to see Cambridge Brewing on top of their game. The Small Electric Cat was exceptional, Flower Power, Amber ...

Brewpub - the entrance is a tucked back off the street. But they have some outdoor seating and then indoor bar and seating area. About a dozen house brewed beers available on tap - wide variety. I had glasses of the porter and a sour ale both were pretty good. service at the bar was good, and the food was as well.

I visited on a week night while in Boston on business. It looked very crowded from outside, but they were able to seat my large party immediately with no fuss. The interior was a simple college town bar & grill, but clean, modern and open, The decor consisted of brick, brass and light colored wood. It was a bit loud, but not bad for a college hangout. The atmosphere was laid back, with most tables seeming to concentrate as much on dinner and conversation as on drinking the beer. I saw plenty of people appreciating the beer, but I didn't see any who were just there to pound it down without tasting it.

Service was good, as was the variety and quality of the food.

The beers I had that night were tasty. The beer menu leaned toward IPAs, but there was also some variety that a non-hophead like me could appreciate. For me the standout was Blunderbuss Barleywine aged in a Four Roses Whiskey barrel. All the beers I tried were fresh and well-handled. There were about 15 on tap, which was enough to offer some variety while not being too overwhelming.

This was a great place for dinner and craft beer. If I am in the area again I would certainly go back.

Nothing over the top, and not a large taproom. What it is, is a very comfy, cozy, friendly place to enjoy a really quality craft beer. If I lived in Boston, this is where I would hang out.

Decided to try this place out after Lord Hobo was closed (didn't realize they don't open till 4PM on the weekdays). Nice place tucked away well away from the street. Tons of outdoor seating which was nice on a summer's day. Selection was fairly sparse, maybe a dozen choices with one cask selection. Beer was good, wait staff was attentive and friendly. Really can't complain.

Every thing you'd want in a brewery next door to MIT. Must see. Beantown stout and all their fragrant pale ales FLY!
Try their extensive menu and enjoy the brainy university crowd. A bit of heaven. I'll always return here. Spacious bar.

Love this place, perfect spot to start an evening out on a Friday.

Went here for my birthday over the weekend. The space is in this mixed space building area next too a BBQ restaurant, offices, and the Friendly Toast. The space itself is pretty small relatively. Some tables in the front, a bar area, and tables in the back. Although my party and me were able to be seated quickly on a Saturday night, the small space made the entire restaurant and bar area quite loud.

The bar menu seemed to have over a dozen CBC beers offered with a medium-sized bar menu. I had the 4 sampler flight that offered the Great Pumpkin Ale, Soleil Couchant, Commissioner Gordon, and Brett Sematary. I also had the BBQ bacon cheeseburger, which had an excellent BBQ sauce flavored with their pale ale. Our server was prompt, polite, and knowledgeable.

Overall, I enjoyed this space despite its tight quarters.