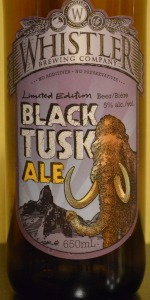 Notes: To date, we have won 2 World Awards for this dark, English-style mild ale. You can expect a mild bitterness with notes of chocolate and roasted coffee, and a very clean finish.

Oh, and Black Tusk Ale is named for a famous local landmark – the jet black core of a now-extinct volcano. A must-see when you next come to Whistler.

From notes, had it at the Vancouver Airport

Appearance: Poured with one finder of head, that laced while it lasted, but quickly disappeared. Body is a dark brown, near black and completely opaque.

Smell: Slight nut note is all I get initially and even with ample warming, all I am getting is some mild toffee being brought to the table, with maybe a hint of licorice? Very weak.

Taste: Dark chocolate to start with a touch of licoric that gives way to charred burnt malt and then a finally slight muddy hop kick. I explicitly noted, I wouldn't have minded a bit more bitterness at the end, probably to drown out the burnt note.

Mouthfeel: Surprisingly despite the lack of head, I get an excess carbonation vibe from this. That kind of club soda taking over a drink when you've over diluted it. Transitioning is kind of a rough patch as well here, but at least the aftertaste is a mild charred malt note with a touch of licorice.

Drinkability: It's very thin, and drinks like this should be a 3.5% ABV beer. How this has been accomplished with a 5% beer leaves me asking both how and why? It's refreshing I suppose, and settles down well enough but this isn't what I want with a dark ale.

Final Thoughts: This was the last beer I had in BC and it was probably the biggest disappointment of the trip. Again, this is shocking to me that this is 5% as this drinks like an absurdly light 3.5% bitter gone wrong and too charred. I certainly would not be looking to pick this one up again should I return to BC, nor do I think you should either. Hard pass.

Dark red-brown color with a very short tan head. The head quickly collapsed to a thin skiff across the top. No lacing. Too dark to see the carbonation level. Looks like a coke in the glass.

Smells of sweet malts, more like a malty coke than a beer. Swirling the glass kicked up a bit of barnyard.

Very thin flavor. Some mild malt and a little bit sweet. Aftertaste is similar to the smell of dry, uncooked quick oats (oatmeal). Might be better chilled cold on a hot day. Still working on the soft drink theme.

Quickly foams up like a beer, but still has a lot of tongue tingling carbonation like a coke.

Somewhat insipid. Boring. Overwhelmingly mild. This is far too much like a coke where some of the sugar has been replaced with a little malt and most of the flavor left out. A good beer for people who don't like beer.

Nose is very malty with hints of coffee and cocoa.

Palate is much of the same and lacking some complexity - very mildly hopped.

Mouth is a little thin

Overall very easy drinking and recommended if you want something unchallenging.

Had on-tap at the Vancouver airport, poured into a pint glass.

T/F: Semi-sweet overall.. with roasted malts providing the bulk of the flavor. Notes of cocoa and cherry... very mild hops at the finish to clean it up a bit. Moderate carbonation... medium thickness.

O: Not bad for a sweet-ish stout, but not a standout either. Very sessionable and no bad flavors to speak of. I'd have it again.

Taste - Pretty identical to the aromas. Caramel malts start it off then go into the toffee sweetness, dark fruits (plum, raisin), hint of nuttiness, and slight earthy hops. The taste is not as pronounced as the aromas suggest.

Mouthfeel - Light to medium bodied with light to moderate carbonation. Finishes with the toffee sweetness and slight dark fruits.

Overall - An agreeable English dark mild. I found the aromas to be a promising start but fell through in the taste. Nonetheless, this has the definite "sessionable" quality to it but the flavours just need to be amped a tad.

A: Very dark, but clear with a reddish hue when held to the light. Lots of light brown head leaving lacing around the glass as it dissipates.

T: Grainy, roasted-malt flavours, mildly bitter, with a bit of warmth from the alcohol.

O: Very sessionable. This isn't outstanding, but there's nothing to complain about. Definitely an enjoyable beer, if not a show stopper.

A-pour is very dark brown from the bottle to a near black in the glass , almost impenetrable to light , with a big tan head which is quickly dissipating leaving a minimal lace around the pint

S-grain ? with some roasted chocolate malt

Ov-one and done , no thanks Whistler

A: Pours a mahogany color with a nice tan head that fades to bits of lacing.

T: Taste follows the aroma with roasted malt, dark chocolate with some dark fruit and bit of coffee. Mild bitterness and a dry finish.

F: Medium body, smooth with a bit of a creamy texture.