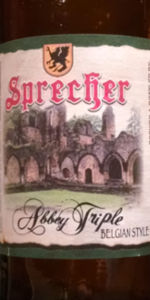 This is a real treat, many times we run into US “Tripels” that are just strong pale beers fermented with a Belgian yeast yet there is no finesse. Sprecher lays on the finesse heavy here, attention to detail is very noticeable from the first sip. Not a brew that knocks our socks off but very true to style.

A - The beers bright goldenrod hue shines with clarity but is slightly undone by the quickly fleeting white head that allows the aroma to evaporate. Dots of lace stick to the glass after a good swirl brings the head back but it doesn't quite look the part of a classic tripel.

S - Abbey Triple's smooth, voluptuous nose focuses on Belgian-inspired yeast and it's bountiful esters of banana, white pepper, clay, coriander, and bubblegum all balanced by sweet malty notes of tick-sliced caramel-drizzled banana bread. The nose is one of the closest to authentic Belgian but it's missing that little something extra that would push it over the edge.

T - Backed by deliciously sweet pilsner malt, the beer's big yeast profile continues its quiet rampage across the tongue, delivering a combination of sweet bubblegum and banana with complimentary suggestions of coriander seed, grey clay, and a dash of white pepper on the finish.

M - Lively carbonation comes as a slight surprise after the head disappears so quickly but, Abbey Triple's mouthfeel is near perfect; creamy and smooth bodied with slightly sweet lingering finish balanced with a touch of spice and dry alcohol.

O - Sprecher's Abbey Triple was one of my first adventurous craft beer endeavors years ago and made my top five list when I was featured on the podcast The High Five. Since then I've had it now and again, revisiting bottles from time to time including some more than five years old; my experiences have been this beer does not age gracefully. But this fresh bottle of Abbey Triple wonderfully showcases Belgian yeast and the juxtaposition of both subtle and powerful fruity and spicy components brought about wholly by fermentation. Abbey Triple is a lovely beer that's also dangerously drinkable.

Pours golden and hazy
Smells like cloves and pineapple juice
Tastes like citrus with a lingering clove bite and maybe white grape juice.
Mouthfeel is fantastic bright with lots of tiny little bubbles
Overall very recognizable as a tripel. Similar to golden monkey.

A: Copper color, hazy. Nice head to it.

S: Smells like an abundance of flavors, multiple spices in this brew. Has a fruity smell to it.

T: The taste is amazing. It has so many well balanced tastes. The Fruity esters leave a great aftertaste lingering.

M: It's Like Butta. It just glides across your tongue and down the hatch.

D: I frequent this beer very often and it just keeps me comin' back for more its a great triple and I think anyone can say that if they like a triple they will like sprechers triple. Even as it warms it's tastes and aromas just jump out at you.

16oz. bottle poured into a tulip. Bottled sometime in March.

(A)- Pours a cloudy golden yellow/orange hue that produced a barely visible white head that dissipated immediately down to bubbles even after a vigorous pour. A little disappointing considering the style it is in the head formation.

(T)- Again, mountains of lush & creamy bananas with a twist of lemon & clove. Very wheat-like with a thicker finish of biscuits, hay, and clay.

(D)- A solid to great Triple that was the first one to introduce me to this style. There are better ones out there, but for the price, you really cant go wrong with this one. Simply delicious.

A - Beer has a orange colored body; good amount of carbonation is visible; half finger foam formed; little amount of lacing formed on the sides

S - Sour fruit notes come up; slightly yeasty but I smell mostly wheat and oats notes; high ABV is also prevalent; some roasted barley notes are hidden behind other scents

T - Slight dry hop taste; sour grape notes wash through your mouth; almost like a champagne; nice touch of wheat and oats sit on top of every sip, which doesn't stick very long

D - Alright beer; not bad for a Tripel, makes a better food pairing beer, without to much strength and overpowering aromas; could be OK for the summer

Served in a Riedel stemless snifter.

Another offering set aside for me by VDubb86 and enjoyed in his basement bar. (Didn't Rush sing of basement bars? Good times.) It pours a hazy pale orange-amber topped by a finger of white foam. The nose comprises banana, clove, orange zest, and black pepper. The taste holds the above, as well as ginger, coriander, and a pinch o' nutmeg. The body is a light medium, with a moderate carbonation and a dry-ish finish. Overall, a solid tripel, but nothing overtly special or impressive. I'd call it a very nice go-to, "sessionable" (relatively-speaking, I guess) tripel.

Poured into a chilled imperial pint glass.
Comes out a dark golden color with a tiny head that had minimal retention or lacing.
The smell and taste were similar to each other. A sweet caramel smothered bisquit malt a fruity hint toward banana and spice (clove). The alcohol is well hidden until it warms, but it is there in the background.
With the medium body and almost flat carbonation, I can't stand to drink too much of this strong concoction.

I do believe this is the only Triple with a twist off. This is noted.

A - Wow not sure how old my bottle is but I got a 1/2 inch of head that fizzes out to nothing bit a light lace ring and tons of sediment floaties. Man those floaties are thick! Color is a light golden yellow with tones of amber.

S - Initial smells of yeast, bubblegum and mild hops. Could easily argue that this is a Belgium pale ale but I move to taste.

T - Moderately light with what seems to be wheat making a strong appearance next to hops. With mild bubblegum and fruity yeast I again argue this taste like a wheat based Belgium pale than a triple. Overall not bad.

M - Light to medium but I am not sure an easy drinking/less flavorful triple is what I expected.

Overall damn this beer was old and yeasty but held true to it's base of a pretty nice Belgium ale. Would like to try it again and probably will. Hopefully fresh this time.

Poured from a brown 12 oz. bottle. Has a dark golden color with a 1/2 inch head. Smell is of fruits, apples in particular, yeast, some spices. Taste is fruits, malts, some spices, alcohol is present, complex and flavorful. Feels medium bodied in the mouth and overall is a good quality beer.

on tap at devils den in philly

Pours a deep caramel color with some plum and reddish hues. Layer of beige head fades out with some filmy retention and spots of lacing.

Strong scents of dark fruit with plum and cherry, some raisin as well. Some caramel, light boozyness, roasted malt.

Plenty of fruited sweetness right up front, driven by plum, raisin, and dates. Caramelized sugar with roasted malts. The candied fruits return, trumping any sort of malt balance, which pretty much rides through the end of the beer, along with an added spike of alcohol.

A- Pours a bright golden orange that is a tad bit cloudy. Also pours a fingers worth of head that dissipates rather quickly and doesn't really leave any lacing.
S- A strong smell of banana, clove and coriander. Also a little bit of yeast and maybe a hint of vanilla.
T- This is a little sweeter than what is normal for the style but I definitely don't mind it. The banana and clove come out and more flavors come out when it warms up.
M- The only knock on this beer is it is a little thin for a tripel. A good amount of carbonation helps though.
D- Some people may be inhibited by the sweetness of this beer but I rather enjoy it and thus makes it more drinkable. The ABV is rather high but I could put a few of these back with ease.