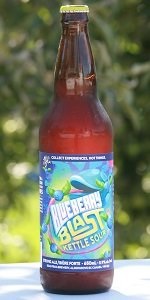 Dead Frog Brewery 'Blue Berry Blast' Kettle Sour @ 5.9% , served from a 650 ml bottle
A-pour is amber from the bottle to a light golden/amber in the glass with a small off-white head leaving a spotty lace ring along the tulip
S-blueberry's
T-blueberry blast to start , kinda tart & refreshing swallow
MF-mild carbonation , medium body
Ov-if you like blueberries , you will like this sour beer
prost LampertLand

1L howler from the Century Park Liquor Depot that doesn't seem to be afflicted by the typical banality of their myriad other locations - because of dudes like Sebastian.

This beer pours a murky, medium copper amber colour, with one skinny finger of weakly puffy, broadly bubbly, and kind of fizzy dirty white head, which leaves pretty much nothing in the way of lace anywhere near the glass as it quickly blows off.

The carbonation is fairly inert in its run of the mill frothiness, the body a decent middleweight, and generally smooth, the gently lactic blueberry character very benevolent in its ongoing proceedings. It finishes off-dry, that initial blueberry confection essence still a strong lingering presence.

Overall - while I don't typically cotton to this particular fruit in the real world (I had to answer my son's query at lunchtime about why I wouldn't have some of his frozen blueberries for the umpteenth time earlier today), I somehow don't have a problem with it in beer - just like coffee, huh. Anyways, here they are resplendent, and do well to engender a hearty quaffability, even if the sour part of the equation is thankfully lost on me.

Appearance: Pours a hazy bluish pink (almost like ruby red grapefruit with a splash of blueberry juice) and a fairly frothy pale pink-white head that dissipates almost as quickly as it forms. a spatter of tiny surface bubbles linger as well a small collection around the ring.

Aromatics: Ahhhh BLUEBERRIES! There is no hiding the blueberry scent in this baby, my first whiff really reminded me of a blue Mr. Freeze (i.e. blue freezy). The nose so full of sweet and tangy fruit goodness you hardly know it’s even beer. I’m struggling to get past the blueberry - but it’s so enticing I just want to get on to taste. There is some caramel maltiness and just a hint of yeasty fresh dough.

Taste: Sweet and tart, blueberry obviously - but there is a slight pucker of lemon in there too - all mixed with a very fresh spring water. The sourness is almost rhubarb-like without being too bitter. I’d also say there is a touch of saltiness under the subtle bitter and I absolutely love the blueberry infused aftertaste.

Feel: Its bright, fresh, clean, and crisp. Relatively low carbonation in a medium body. The finish has a semi-dry mix of sensation - there is the tang of blueberry that gives way to slightly wooden feel - I can only imagine licking a nice and smooth cedar plank, but I imagine the texture is similar - I may have to actually lick some woods just to make sure I’m make a more informed explanation but I stick to this observation for now. there is a little bit of plant/grassiness in there too.

Overall: Ba-Bam! wow, I’ve had a lot of fruity sours this summer, and let me tell ya, this is one of my favourites. Not sure if it’s because of the smell or the cool aftertaste or just the whole kit and caboodle. Though I think if it smells the way it does I would have really amped up the blueberry in flavour. But it is crisp and refreshing, has a pretty good fruit flavour, not overly sour but a nice compromise and the sacrifice of sour for fruitiness works great here in my opinion just wish it had more now though. Not necessarily simple but not overly complex either. For me, this kettle sour is one of the best ones I’ve had that is not citrus based.

Pairing: I just want to capitalized on the blueberries a bit - so I’m actually going to whip up a batch of crêpes right now before I finish this bottle (waffles will work just as well) - with a light berry syrup (corn syrup, strawberries, cherries, and a little sugar - heated in a saucepan) and topped with a couple swirls of whipped cream. I’m pretty sure it will work out great! Keeping it relatively light, capitalize on the fruitiness and throw in a bit of fat/weight to make up for lightish medium body, and pounce on that blueberry blast.

Move over, Pumphouse. You may serve yours with blueberries in the glass at your brewpub, but this is now the best blueberry beer I've tasted. Pours a cloudy, purplish colour without much head. Smells of cooked blueberries with a bit of lemon. Taste is strong on blueberry, but not as sour as I would have expected.