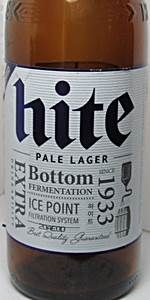 To me, clearly this is a better pale lager than its average rating. In fact, I rate it above average to its peers in the Euro style.
That partially explains my rating, ridiculously above the average. Another reason is that adjuncts don't bother me. Like most malt-heads, I am partial to barley; but wheat has its role for softness and rice is OK.

I also place lots of emphasis on how well a beer goes with food. I had Hite with a cup of green curry ramen and it did its job.
I went on their website and -- not knowing Korean -- I'm guessing they try to keep the macros at bay in Korea. That must be worth some points.

I've read no-one else's reviews below yet, just to be clear. Just to note I'm setting out this as I have a presumption that this beer will taste under-hopped to me; we'll see! That's since this beer is East Asian and considering how many East-Asians find bitterness overwhelmingly unpleasant due to a common genetic variation out there sometimes referred to as 'The Bitter Gene'. It means they are repelled by the likes of Brussell sprouts, kale, black coffe, and indeed bitter hops in beer.

L - Very pale golden, crystal clear, pours with 5mm white head slowly reducing.
S - pretty much just grains.
T - It seems quite a bit more bitter than I anticipated. Hmmm, but this might also be because it's highly chilled and my sip of my first beer of a session. Apart from some graininess there isn't much flavour to it. So I thought it might be a rice beer and checked, but no it's brewed with barley. It's simply lacking rather than nasty in any way.
F - I can sense the 4.3% ABV but as there is little flavour of note alongside it comes over as perhaps even a bit lighter than that.
O - So my presumption re: it's bitterness seems to been incorrect, but I've left it in anyway as non East-Asian people who might be getting to taste some East Asian beers are definitely going to encounter 'under-hopped' beers. Overall the beer is arguably over-carbonated - at times another East Asian trait - and of little flavour or interest in my opinion.
I bought this from 'FOOD BASICS Oriental Superstore' on Queensway, London W2. Priced at £1.69 for a 330ml bottle. BB: 16/07/2019.

taste: you don't get the corn adjunt at first sip, but then it grows as the beer warms. Up to that point it was a middle of the road lager, which I guess almost all lagers are.

mouthfeel: nothins good or bad, just drinkable, a bit sweet due to that disgusting corn addition.

overall: to tell the truth, I thought it would be much worse that what it was.

I picked this up in a local Korean Market. I jump at the opportunity to get this beer. Best enjoyed ice cold. It isn't the best beer but it is really enjoyable beer that is more like the Old School American Adjunct style.

355ml can poured into a pint glass.

Crystal clear pale gold in color, the pour forms up decent white frothy head with average retention, it dissipates to some foamy sheet atop along with some lacing left, medium visible carbonation.

Bready malt predominated, some earthiness , dry grain, and slight citrusy in the aroma.

Sweet bready malt flows through the taste buds together with somewhat nutty and grain then hop with a slight citrusy, earthy yet a very subtle hint of bitterness at the finish.

Yes, it is flat but a big quaffable one without doubt, very sessionable yet very light, clean and goes down well easy.

Sampled in a Korean restaurant in NYC on my recent trip. The bottle label & appearance is the best thing about this beer. Pours a clear light golden with a medium white head. Aromas are grainy malt, straw & corn. Taste is light, sweet citrus, musky bready malt, and light corn. Light body & low carbonation. Overall more excited by the country it's from & the bottle appearance than the beer it self

Had it in a trendy tapas place in Park Slope Brooklyn and was convinced that I was in that Budweiser commercial where they replace the beer in a hipster bar with Budweiser as a blind taste test.

Anyway, it was watery, pale, light and generally tasteless. It reminded me of an adjunct lager . . . maybe a adjunct lager light. After one glass I switched to another beer.

Pours light yellow color with a one finger head that dissipates quickly. Skunky adjunct lager smell, not much depth. Watered down taste, not much there either. Light bodied and heavily carbonated. Refreshing to drink, better than most macrobrews.

Bought from Don Quijote $3.99 for a 52 ounce pitcher. Came in a plastic bottle. Very clear light golden color, sweet tasting, no bitterness, light mouthfeel. Probably best for drinking when eating spicy hot Korean food since it is very watery. On its own not much better than water.

0,5 liters can. ABV is 5%, not 4,3% as stated in the description.
Looks like any run of the mill lager, but that is the only good aspect when it comes to this bear. Almost no smell at all, just faint wheat and hay, odd feel to a point where it's plain bad. Do not recommend!