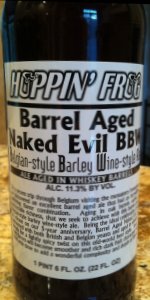 Bottle:
A matte brown that appears to be a little murky, but that look turns out to be a little deceiving. The Creamy froth atop the beer ends in a thick ring. With this sipper, the glass gets a brief sheet of beige bubbles before the returning ring of head reclaims it; since the ring is so thick, there isn't a chance for lace to form.

Nose is wood, leather, and light bourbon from the barrel aging, with a bitter dark fruit or sweeter dark cherry from the base beer - fig, earthen tones. There's even a little freshly dug up mushroom of all things. In some whiffs, the scent of chewing tobacco comes out, with the leathery notes and some wood. At near room temperature, a lightly tart caramel scent comes about, with the barrel fading to the background.

Taste is a little more tangy tart, a golden raisin taste; I can also get a little bit of the leather before the caramel maltiness comes to bear. The alcohol presence is felt next, providing a little burn. It's hard to distinguish if this is from the beer itself or the barrel, they seem merged quite well here. A note of plum and the bitterness of hops is also noticed. The latter can't compete with the dark fruit, caramel and vanilla (though it does a better job in the lingering taste).

This is a pretty nicely constructed barelywine that gets a nice compliment from the barrel aging. There is a decent presence of alcohol, and the lingering bitterness almost seems like the base is an American version of a barleywine. I cannot say I noticed any specific Belgian influence, though I could see some of the dark fruit notes being at home in a Belgian Quad.