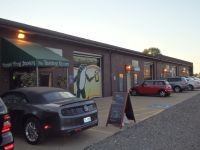 Notes: Hoppin’ Frog Brewery is a small, hands-on brewery in Akron, Ohio making very flavorful beers in the most flavorful styles. We brew the highest quality beer with an uncompromising focus on detail, from the ingredient selection to the brewing process.

Hoppin’ Frog is the concept of owner and established brewmaster Fred Karm, who has designed and produced 22 award winning beers at the Great American Beer Festival and World Beer Cup, the two most prestigious contests in the world. Hoppin’ Frog Brewery was established in 2006, and now distributes beer in 22 states and 38 foreign countries.

4.39/5  rDev +1.2%
vibe: 3.5 | quality: 4.75 | service: 4.5 | selection: 4.25
Opens at 10am on a Sunday! I was there at 1020....pretty standard bar like atmosphere on the inside nothing special. In an industrial area/park with a gravel parking lot but very nice outside patio. Everything I had was excellent. I had 5-5 ounce tasters. The Swiss holiday lager (Frogiclaus) and old ale (Den Haag) were just killer I would give them both 5s. Service attentive but not pushy. Found the selection great for what they are known for. A LOT of big beers Probably 25 on tap and another 40 to go. Well worth the stop.
Jun 04, 2022

Reviewed by beerookie from Ohio

I suspect that when they open back up they will be inundated with complaints about the direction Fred is taking the brewery. Hoppin Frog has always made stouts, porters, and barrel aged stuff that can hang with the best in the world. Now, for some reason, it's all about chintzy desert beers with names you could never remember, and why would you want to!

"Coconut Rum Barrel-Aged Peanut Butter Hazelnut Caramel Chocolate Cake Stout" Are you kidding? One of the many simply disgusting beers that Hoppin Frog has released recently.

Hopefully this fad of sickening sweet desert beers will soon pass and Hoppin Frog will go back to what they did very well!

Reviewed by Danzifer from Ohio

Reviewed by KurtisCarman from Ohio

4.19/5  rDev -3.5%
vibe: 3.5 | quality: 5 | service: 4 | selection: 3.75
Really small space. Didn't have any food but I imagine this place would be way cooler if it was all bar and cocktail tables without food so you could just stand around and drink. Anyways, the beer is killer and the bartender was good which is what really matters. Would definitely go again.
Nov 17, 2018

4.28/5  rDev -1.4%
vibe: 4 | quality: 4.5 | service: 4.5 | selection: 4 | food: 4
I recently visited Hoppin’ Frog Brewery in Akron, Ohio. It is nearby Akron Fulton International Airport and is right off E. Waterloo Rd (224), but it is easy to miss. I had to make a U-turn. Next to the brewery there is a trailer & hitch company featuring a white building with red window frames and a blue building. It stands out. When you see that exit the road before you pass those buildings and the Hoppin’ Frog is right there.

I’ve had many of their beers previously, the various BORIS and DORIS Imperial Stouts and some IPAs and all the beers I’ve tasted have been top notch. On my visit I had a few beers including DORIS the Destroyer the Nitro version. It was probably the most smooth and creamy Imperial Stout I’ve ever had. We also bought a few bottles to take home. If you like Stouts this is the place for you. Unlike most breweries I’ve been to they served food in the tasting room (no food truck) and they had waiters serving on you. They had a quite good menu. I had the BORIS BBQ sandwich for ten dollars, and it was delicious and paired well with a BORIS Imperial Stout. The service was friendly and knowledgeable and the food and the beers came pretty quickly. Overall I think it was a very nice brewery with a good atmosphere.

We showed up, and there was a decent selection of about 10-15 beers, many of which were the stouts we get in DC. We asked the bartender to set us up with a sampler of non-stouts, and he did a good job (we ended up taking home 2 of the choices). The selections in general tended towards bigger beers (Wee Heavy, DIPA, Barleywines, etc), though they had a couple in the more normal range.

The service was nice, prompt, and friendly. The food was basically bar food, but with a few twists and oddities. What we had was quite tasty.

Would definitely stop by here again at any opportunity.

Reviewed by BigGun from Tennessee

Rated by shanegatter from Ohio

Reviewed by Beef_Curtains from Ohio

3.94/5  rDev -9.2%
vibe: 3.25 | quality: 4.25 | service: 4 | selection: 3.75 | food: 4
The taproom isn't very big and looks like a pretty ordinary bar. You can't see any of the brewing equipment while you drink. They have about a dozen house beers on tap as well as a few guest taps. Most of their draft beers are also in bottles (which they sell to-go or drink-in), only a couple were draft only. Draft sizes are 5, 8, and 16 oz. and they also do flights. But no growlers. The food menu is small, mostly BBQ and chips. I had the pulled pork sandwich which was delicious and filling. The bartenders looked barely old enough to drink the beer, but were friendly and attentive. Overall, I'd say it's worth visiting you're in the area. Don't come here looking for a bunch of brewery exclusives, but it is a cheaper way to try a lot of their beers (which are quality) without having to buy their bombers.
Feb 03, 2016

Reviewed by RayOhioFelton from Ohio

3.6/5  rDev -17.1%
vibe: 4 | quality: 4.25 | service: 2.25 | selection: 4
I was a huge fan of Hoppin Frog until a few poor experiences ruined this place for me. Don't get me wrong the beer is great and if that's what you are looking for you found it. However, I was in a while back to purchase a case of BA Doris (when they said it was brewery only and then 4 weeks later it hit the shelf.) I was also buying 2 snifters. I asked for a "taste" since they had it on tap. Not a sample not a glass...a taste. They charged me $1.75 for a one ounce pour on top of my $180 in purchases. I emailed Fred telling him I had this experience and he said he was glad his bartenders charged me because it is the law. Odd how any other craft bar or brewery provides tastes to assure you like a beer before you buy it. Never spent another dime on their beer since!
Jan 30, 2016
Rated: 1.92 by capt93 from Ohio

4.58/5  rDev +5.5%
vibe: 4 | quality: 5 | service: 5 | selection: 4.5 | food: 3
The actual physical bar itself is one of the highest-end bars I've seen in a brewpub. The setting is a little open and bright compared to most bars, but it's not about coming in, sitting back, staying a while, and getting drunk. It's about experiencing high-end beers that are just about as fresh from the fermenters as you can get anywhere, and pairing it with unique food combinations, if you're so inclined.

Aside from their own extensive draft list, which is always well-distributed between styles and features numerous variations of their flaghips, they serve some of the rarest beers offered on draft in this state, some of which are direct competitors and rivals. For example, right now they have Bell's Expedition Stout, making it easy for the customers to directly compare it to DORIS; even better, since it was just IPA week, they had Jackie O's Mandala Citra, Brew Kettle El Lupulo Libre, Alpine Duet, Grapefruit Sculpin AND Sorry Not Sorry so the customer could directly compare them to Gangster Frog, Goose Juice, Hoppin to Heaven, and Teeny Tiny Test Batch Special Hop. Plus, they always have bottles of Thirsty Dog's Wulver in stock because that's the kind of respect they have for excellent beer, even though they brew and barrel-age their own Wee Heavy.

On to Frog's own beers on tap, as I said they always have a wide variety of styles to choose from, and they always make sure to put their freshest stuff on draft. Having had two of their IPAs the same day they were kegged, I have to tell you, this can be an absolutely amazing experience. What's funny about how delicious those are, their IPAs aren't even their best beers. They also like to get creative by infusing their beers every Tuesday in towers. Sometimes it can be a little weird, but other times, they really hit the jackpot and it's always worth trying out.

As far as the food goes, Akron is a burger and pizza town, but Frog boldly steers clear of that while remaining a popular draw relative to other local restaurants that try to do the same. It's great that they put forth the effort to find local produce and meat purveyors and cook food few places around here offer. As long as you know you're not at a burger joint, and you'll be paying for premium brew, you're in for a treat.

Reviewed by buzzy from Pennsylvania