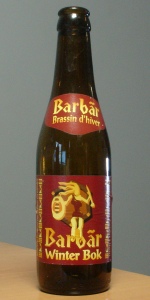 Notes: In the beginning, it was only brewed in the winter and was called Barbãr Winter Bok. However, since 2008 the consumer decided otherwise.
View: More Beers
Recent ratings and reviews. | Log in to view more ratings + sorting options.

A very dry, strong dark ale. Character is raisins, gentle malt, a bit bready. More carbonation than expected in a winter beer. Very easy to drink for a strong ale. Quite decent, but not with anywhere near the depth of a quad or a Delirium Nocturnum, both of which are better options "en hiver."

L- Deep chestnut brown, clear, pours with 3mm pale tan head (10 mins later it's holding well).
S- Not that prominent, a mild fruit and timber note?
T- Big taste, deep and solid. Deep malts, slight cherry?/fruit liqueur ABV% zing, lending to a deep but brighter piquant facet that stops it all becoming a bit too heavy. This combines with going into a hoppier/dryer finish.
F- I can see why this was pitched as a winter-warmer, it's very of that style, deep, pungent, intense, one to slow sip. The carbonation in the mouth is unusually and notably huuuge, really! Resist taking a big gulp and hoping to 'swill' and have it linger longer in the mouth.
O- It's very nice, though I'd like it more if I found something more unique and distinctive about it. I'm enjoying drinking it but no special reason to buy this as a 'specialist import' for home delivery to the UK.
Euro2.70/330ml bottle from BelgiumInABox at Antwerp/BE for home delivery to me in London/UK BB: 11/06/2021.

This was a nice dessert. (But, I did cheat with a bite of chocolate.)
I bought it at UtoBeer in London's Brough Market, seeking a respite from the surprising dearth of Belgian beers in Britain.

But, Bok is not a good Looker; once the initial foam is gone, it looks like cola. Smells indicate this is a winter seasonal: sweet, holiday spicing and sweet. (I recognize I said : "sweet" twice; and did so for a purpose, it is sweet.) Tastes surprisingly are not too sweet, nicely balanced with the hop spicing and the holiday spicing. The bubbles never let this get cloying, either.

While this is my third from Lefebvre, I haven't reviewed them yet. I was impressed that the fourth, fifth and sixth generation of this family brewery is still alive. I look forward to finding Barbar again (both Bok and Honey.) But their distribution is weak in the U.S. So, maybe a trip to Belgium is in the cards soon.

Pours a dark-brown color with a medium top of beige head that dissolves quickly and leave some lacings. Aroma is of plums,dried fruits ,honey,caramel,corriander,bread and brown sugar. The taste starts of sweet with notes of fruits and honey with some malty tones in the back, it also has quite some herbal and spicy notes in the flavour. The finish is slightly bitter and herbal. The flavours has some nice complexity, but it get a little unballanced. Mouthfeel is smooth and creamy, but slightly thin. Medium carbonation with a light body.
Decent and good enough dark ale, but far from very impressive.

Do not smell a goat, taste it almost no, too white foam hardly show malt in taste, it's more a double with a honey's swelling, surprisingly not very special

Barbãr Bok has a stylish look: bubbly foam atop of sleek black liquid. It reminds me of a piano key, the off-white tint is reminiscent of old, tarnished ivory. Opaque and serious, the beer's actual appearance is a stark contrast to the easy-to-dismiss, cartoonish, pixelated cave-art label.

Some people may know this beer as 'Barbãr De Noël' and, indeed, this winter seasonal is highly suggestive of the holiday season; the aroma brims with baking spices and brown sugar sweetness. Most prominent is probably anise, but it's followed closely behind by coriander, nutmeg, clove and orange zest.

A curious thing about the Barbãr beers is that the honey is added during the boil. As result, it doesn't factor nearly so much into the flavour, although given the strong presence of black licorice, bitter orange peel, fennel and pantry spice, there's a good chance it wouldn't be noticed much anyhow.

Barbãr Bok is a beer of strength but not body; it's a featherweight offering despite the deep, dark flavours. Malt is really not this beer's strong suit. The not-so-subtle 8.5% combines with earthy notes of fennel and anise and spicy cardamom to create a miniature Fernet or Absinthe of sorts.

Barbãr Bok is as good a digestif as standard Barbãr is an aperitif. I very much enjoy the distinctive character of both though I can see why others may not. Still, I'd recommend this darker version to anyone in cold climates given the spicy, sweet, savory profile is perfectly suited to holiday drinking.

On tap at Pub L'Escale - Riems, France. Sweetish brew, dark brown in color. Decent but have had better Belgians and their so called 'Boks". Somewhere between an Oud Bruin and a Dubbel

Dark brown/black colour with a steady crispy head of foam that holds quite well. Fairly weak smell of yeast and caramel. The taste is alright with caramel, honey, orange, malt and yeast flavours, with honey and mild hops in the aftertaste, but it's also a bit bland. This beers seems to be missing complexity. The alcohol mixes nicely with the other flavours though, and this beer has a smooth mouth feel (probably due to the honey) and gives a warming feeling afterwards. They shouldn't call it bok though: you simply expect something more bitter and pronounced. Please relabel this beer as Noël (X-mas) again, instead of this shameless freeride on the dutch 'herfstbok' market.

Very sweet dark, little to no bitterness or sourness. Quite fizzy. Color very reminiscent of soda.
Tastes like honey dissolved inside a light dark ale.
A little heavy if it starts too warm, I'd go with 33cl or half pints if on tap, needs to stay cold.

Flavors include orange peel (tangy), a little caramel (color gives that away), spices.

A: Nearly opaque black. Poured with thin head.
S: Toasted honey bread.
T: Caramel. Medium- sweet. Slightly orange peel. A touch of chocolate. Drying out when finish.
M: High carbonation. Medium bodied.
O: Much dryer than I expected, which is actually I preferred though. Perhaps it is why the "winter" word has been removed. A good brew, but I'd expect more complex flavors.