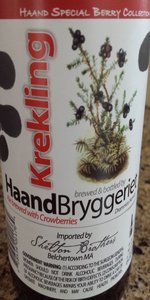 Notes: Krekling is a fruity and refreshing fruit ale made with lots of these small berries picked at Finnmarksvidda up in the very north of Norway. These berries used to eaten for their thirst quenching effect. The beer has a nice reddish hue.

The bottle says it was brewed in 2012, and its now just turned 2018, so I was worried about how it had held up. I needn't have worried. This is a light, refreshing beer. As such, it has a very clean (but not watery) feel, and a very light smell. The look is a gorgeous light purple. As for the taste, I'm not sure I know enough of the Krekling berry to say how faithful the beer's taste is to that of the berry, but I'm not terribly concerned about this, because I like the taste regardless. It has a light, subtle, grapey sourness to it, at the same time that it has a very soft smokiness to it. A really interesting and unique taste combination. This is the same smokiness, though perhaps a bit lighter, than this brewery's Hesjeol beer. Anyway, this is a very subtle but unique beer.

i know nothing at all about crowberries, maybe never even heard of them before this beer, but for some reason i had higher hopes. i mean, all of the beer these guys make is amazing, i just wanted this to be something more than it is, a little old now i know, but it seemed to be missing the magic their other beers have. deep pink to almost purple in color, with a very rich saturation and tall lasting off white head, thick and heavy, some visible sediment. pretty flat aroma, in that the berries dont really seem to have a whole lot unique about them, at least in this beer, a touch tart maybe, and sort of grapey, but little else. it smells a little old ad oxidized, and there is a ton of yeast character to it, a little sloppy really, and the taste matches that. the berries dont do a whole lot for me, generic fruit but nothing specific for me, they must have faded some over time. the grain tastes wheaty but sort of stale, and the yeast tastes tired, like this would have been better a year ago. some bready notes, soft pepper, and some residual sweetness from the fruit, elderberry without the astringency, not bad at all, even sort of rich and desserty with red wine notes with the grain, but less compelling than anticipated, especially after being blown away recently by the wild thing they did with cranberries and currants, i expected this to be similar, and its entirely different. wishing i drank this one sooner, im sure it was better awhile ago. still cool, full bodied, and a bit different, but the berries do not contribute anything beyond the ordinary, especially for being such an uncommon ingredient...

No idea on the age of this bottle. Thanks MasterOldBrownDog for sharing.

A- Reddish pour from the 500ml to a few glasses with a foamy, frothy white head. Decent head retention leads to a large belt that drops large sheets and webs of lacing.

T- The fruitiness is a bit more apparent here and it reminds me slightly of cranberry and then general berry cocktail (strawberry, blueberry). Earthy dirt, herbal, slight must, apple juice and pale grains.

Not a ton of berries but with time they grow on me. Reminds me of something between a cranberry and a strawberry on top of a not so complex base beer.

Don't remember where I got this. Think Julio's unless I got this as an extra in a trade. Anyways....

S - Aroma is an epic let down. Its earthy, grains, almost a wheat aroma, wet hay. Getting no fruit at all. A shame.

M - Mouthfeel is on par with what I would like here, nice carbonation, crisp.

O - Overall a huge let down. Looked so great but smelled and tasted so mediocre. Huge disappointment.

Wow, I'm a huge fan of HaandBryggeriet and I've had the Krekling before and thought it was something I liked but this bottle is a huge disappointment.

S: Earth and not much else.

T: Just bitter and funky, no hint of fruit or tartness, medicinal and astringent aftertaste.

Did something else end up in this bottle? No bottling date on this one.

A minor mishap while unloading my bag from the store lead to slightly uncapping this beer. Uh oh, guess I'll have to drink it now...

A: Big, gushing pink head. Did I mention this just got dropped on the floor? Really pretty red color, with medium clarity.

S: Smells like crowberries, I guess? Herbal, earth, sour. Perhaps most similar to blueberry, among common fruits, but distinctly something else. Some definitely funk in there too... mushrooms, wet hay

T: Somewhat similar to blueberry and cranberry. Intensely earthy with a mild bitter finish. Bready malt character in the mid-palate.

M: Medium-full body. Carbonation is a bit low, but that may be due to the traumatic circumstances of this pour.

The colour of the body is what makes its appearance being a beautiful and lush cranberry red. It's quite hazy with small amounts of carbonation creeping up the sides of the glass. Just over a finger's worth of off-white fizzy head rests on top. It has good staying power but leaves next to no lace as it sinks.

The first couple of whiffs bring a Berliner Weisse to mind. Spritzy, alive, tart, and sour. Slightly wheaty and slightly sweet. I've never had crowberries and that's why the beer's sweetness seems ambiguous to me. The best way I could describe it would be candied and berry-like.

Not nearly as tart as I had expected in the taste, but the tartness is still there nonetheless. A bit of sweetness is placed on the middle of the tongue, most likely from the crowberries. There's also a faint bready layer in the back. Its tartness is refreshing and perfect for a warm July day on the Oslofjord. The finish is slightly off-putting with a strange astringent bitterness left on the tongue. The overall flavour profile is quite simple.

I'm surprised on how light the body is for 7.4%. A spritzy and refreshing level of carbonation takes my mind off the body being a tad watery. Decently balanced with no sign of the ABV.

This is my first offering from Haandbryggeriet and it was interesting and quite refreshing but not one I'd buy again. I'm still open to trying more of their offerings and look forward to doing so.

Light tart and fruity aroma with mild berry notes. Could be more intense.

Clean and crisp malt flavour with mild tartness and a hint of fruit. It seems a little subdued and wonder if it needs to be 7%.

An interesting and easy drinking beer but the high alcohol seems pointless in this beer.

Krekling is the second beer from the Norwegian HaandBryggeriet I've had (The first being Hesjeol, a smoked beer, the third Odin's Tipple an Imperial Stout). Krekling is made with crowberries, which I'd never heard of before I had this, but they're apparently supposed to have thirst quenching properties. My thirst was quenched. I absolutely loved this beer. It poured dark with a reddish hue without any head to speak of, just a lip around the glass. It was sour and tart, with a nice body and sharp taste that carried the beer all the way through.
I would highly recommend this beer to anyone who loves sour/tart flavor profiles.

On-tap at Beachwood BBQ, a beer brewed with crowberries,

A: Pours an amber red with a light whitish pink head, solid lace.

S: Very cranberry/red currant like notes, some tannin, but a pleasing berry scent.

T: For me it starts of a bit like a dark Belgian, hint of fig, but the crowberries come out fairly quickly. The taste is quite similar to cranberries with a hint of blueberry thrown in. Real nice flavour and blends real well with the malt.

D: This is a really good fruit beer, for me what SA Cranberry lambic should taste like. I've never heard of the crowberry before, but if you like cranberries, you'll like this.

Krekling from HaandBryggeriet
Beer rating: 82 out of 100 with 42 ratings