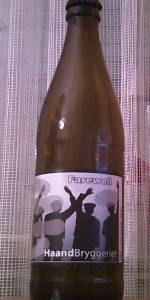 Appearance: Farewell Ale appears a deep brown in the glass, with a back light showing it to be fairly opaque, with deep red edges. A gentle pour yields a massive tan coloured head, that fizzes away a little too quickly for my liking and doesn't leave much in the way of lacing.

Smell: Mmmm, this smells really interesting. The notes of chocolate, roasted malt, an earthy toasted character, creamy caramel, some dark fruitiness (raisins) and a periodic blast of smoke are reminiscent of a big European porter. However, there is a whole other side to the nose with a very interesting, impossible to describe, yeasty character (I am guessing that this is due to HaandBryggeriet's wild house yeast), a herbal quality that at times seems almost spruce like and a little tartness also present.

Taste: As with the nose, the flavour is reminiscent of a strong porter, but with a crazy twist (that doesn't seem to work quite as well as it did in the nose). Flavour notes include: Chocolate, roasted malt, ash, a little smoke, a little caramel, some dark fruitiness, a herbal character, some woodiness and a strange tart yeasty character. The finish is lightly bitter and fairly dry.

Overall: Farewell Ale is certainly a very interesting beer and one I enjoyed drinking, but it is not something I could see my self buying again.

Bottle: Poured a murky dark brown color ale with a large foamy head with good retention and some lacing. Aroma of coffee and chocolate with some light herbs notes is pretty unique and very nice. Taste is a good mix between some coffee and chocolate with light dry fruits, herbs with a dry aftertaste. Body is quite full with good carbonation and no apparent alcohol. Unique and quite complex beer that retains some drinkability.

First had: on tap at Teresa's, Wayne, PA

This is a beer based on an ancient, traditional, Norwegian spiced beer style known as Gravøl or funeral ale.

Served in a tulip glass, a dark brown-black, opaque, with a bubbly, light tan head that receded to a thin layer within a few minutes. Aroma of dark chocolate, lightly smokey malts, spice medley, and indistinct fruits. Similar taste, dark chocolate, dark dried fruits, cinnamon, pepper, charred firewood, with hints of fruity candy. Medium mouthfeel, might remind you of a stout or porter, but lacks the full body inherent of those styles. Interesting and tasty.

A - Murky dark brown body with chunks of sediment, three towering fingers of fizzing soapy head which shrinks away to leave a thin cap and webs of lace.

T - Follows the nose with the smoke, chocolate and raisins. Burnt coffee, dark fruit and booze add to the mix.

O - A very pleasant, warming ale. My first gruit and I like it.

Pours a very, very dark colour with red tinge when held right up to the light. Head is lovely, if a bit overexuberant - beige, dense and good retention. Lace is lovely and clingy.

Taste is quite dark with loads of wood smoke that's quite light and meaty with touches of fruit glaze - orange, honey and plum notes. Oak wood and ham smokiness midway that gives way to an oddly salty finish. Could use a bigger malt presence with more dark roastiness just to ground it. The palate seems to get out of hand a bit towards the end and drifts away from the roastiness one should expect. Not bad, just finishes oddly.

Fairly full body but a bit of drag on the mid-palate that makes it leave a bit empty.

I can taste in this palate the beer this might have been. Unfortunately I have to look for it, as the best flavours here don't quite speak enough for themselves.

I finished off my evening at a Philly Beer Week Shelton Bros event with this ale. Fitting, considering it's name, though it was hardly a farewell to the Farmer's Cabinet, where this event was held - a damn fine establishment in Center City, worthy of repeat visits.

Despite the description on the HaandBryggeriet website touting this ale's "lots of spicy flavors" and "a special flavour not often found in beer", I can't recall anything about what I tasted that would compel me to agree. Nor do I understand the category this is listed under here on BA.

There's certainly a subtle smoky nuance within the more so toasty, but also lightly lightly-over-baked-pie-crusty, marginally sweet milk chocolate malt flavors, These, however, unemboldened by its moderately clean/light body, though, while some nice residual powdery malt sugar was left on the tongue. And, okay, maybe a vague rye-like twang exists, but nothing out of the ordinary. I'd call this a brown porter featuring bonfire ember essence.

I dug it's nearly opaque, gritty, blood-stained dark mud color. Had some foam, too. Gotta try some more of what this brewery has to offer...

Sweet with an almost tart edge. Moderately-strong smoke aroma. Herbal. Citrus notes. The aroma is curious here with some really interesting notes to it.

A solid beer with lots of interesting character. The smokiness is a little surprising for the gruit but appropriate and the esters and very mild citrus notes add great complexity.

On-tap at the Brick Store.

Pours one shade from black with a half-finger tan head. The head recedes into a wispy layer on top leaving decent lacing.

Smells of moderately roasted malts with large amounts of juniper and spruce. Also present are hints of molasses.

Tastes similar to how it smells. Somewhat grainy roasted malt flavors kick things off and are joined quickly by herbal notes - juniper mostly with hints of spruce and other assorted herbs. Midway through the sip hints of dark molasses flavors sweeten the profile slightly before carrying through to a moderately bitter ending.

Mouthfeel is very good. It's got a nice thickness with smooth carbonation.

Drinkability is good. I had no problems finishing my glass and could have another.

Overall I was surprised by the level of roast in this beer. Very interesting and worth a shot.

Had on tap at the Diry Truth in Northampton.

Appearance: Black as can be with a creamy brown head that I could let sit for a few minutes before dinking.

Aroma: Taking the first sniff I would have guessed that I was gong to delve into a a relly good imperial stout. Heavy chocolate and coffe notes, matly and sweet yet also a balanced dryness to it.

Mouthfeel: Full bodied with enough carbonation to accentuate the beer. Silky at first, while finishing with the dryness that the aroma led me on to.

Taste: The aroma came right through on this which was great. I was told that there was no hops used in this beer I really tried to figure out what was done with this beer to gave it the hoppy flavors and bitterness as it had a pleaseant earthy hoppy expression.

Overall: This was a great beer; inviting aroma, complex flavors, high drinkability and pleasing to the mouth. If you come across it pick it up or try a glass. Even for those that don't like stouts (though I know it isn't the style it shares similarities), this might suprise you.

A: This beer pours a deep, dark, opaque black with a two finger of creamy khaki colored head. Head recedes pretty quickly and leaves no lacing.

T: Taste is just fantastic! Tart cherry in the forefront followed by a roasted, charred malt flavoring that really dominates the middle with a dark chocolate mixture. Finish has a bit of a floral hop bite.

D: Goes down quite easily, nice kick, not too filling, I've never had this style before but I would gladly snag this one again!

Check out Halcyondays being the first to review this just before I did :P

Poured into a chalice, this looks awesome - completely opaque with a finger and a half of coffee-colored head. Decent lacing on the glass until about halfway though.

I already reviewed one HaandBryggeriet beer tonight and am now noticing their house yeast dominates the smell - a proportion of wild Norwegian yeasts are included, apparently, but this smells distinctly Belgian - musty, a bit of spoiled fruit and then herbal, with a distinct note of alcohol.

Taste-wise this is more appealing than the Hesjeøl, for me. Stout-like with big coffee notes, sugar cane juice, dark fruit, alcohol and then kind of a yeasty finish - hard to describe the last part. It dries a little between sips and you notice extra fruits you didn't notice before for a second before the ever-present roast takes over again. Herbal hops in the finish - and at the start, now that I think about it. I like it a lot.

Creamy but not especially carbonated. Works for the style, whatever that is. Right where I want it, at least.

Drinkability is hard for me to rate. I don't have another bottle, but if I did, would I drink it NOW? Yes. But I couldn't say if I would even finish it. Tastes more herbal the farther you get into a bottle. Hmm. Different. Definitely good in small doses.

On-tap at Beachwood BBQ, a traditional Norweigan Funeral Ale, this is a hard beer to put into a style, but it is a traditional medieval beer, so I thought it'd fit best here, feel free to correct me,

A: Pours a dark opaque brown, almost black with a medium off-white head, which slowly falls into a light ring, no real lace.

T: Very interesting. It starts off quite woody and grassy, almost like a cedar box. There is big introduction of sweet milk chocolate mid-palate which dominates the beer even as secondary "Belgian" estery flavours come out, yeasty.

D: It may not always be great, but the guys at the HaandBryggeriet always do something interesting that expands your palate. This isn't a mind-blowing beer, but it is a good beer, dark, powerful, but ultimately a contemplative effort.

Farewell Ale from HaandBryggeriet
Beer rating: 86 out of 100 with 21 ratings