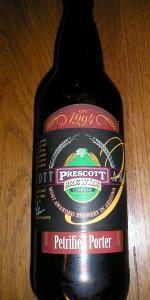 Review from notes: 12oz on top in a pint glass

A - Dark brown color, small fleeting head that sinks quickly and has little to no lacing.

Good stuff here. One of the best beers from this brewery. This would go good with fish and chips as well as a desert beer. Good hop bitterness with a sweet roast to balance it out.

On tap at Prescott Brewing

Very dark but clear mahogany with an exceptionally durable tan head. Nice blotches of sticky laving are left behind on the glass.

Feel: Medium body, with enough carbonation to make it feel a bit lively.

O: great look and feel, but too little flavor and aroma.

Had a pint after a nice hike earlier today at the brewpub. Reviewed from notes.

Beer was served dark brown with an off white head that did not have much hang time.

Nose had hints of roasted malts.

Taste was heavy on roasted malts with a slight hint of dark chocolate. Finish was dry.

Overall this was a pretty good porter that i would drink again.

Enjoyed in a shaker pint at the brewpub in Prescott.

Thin purple-brown in color, fairly light and transparent at the edges. The head is thin yet sticky, a dense layer of cocoa powder-colored film. Thin though it is, it still deposits nice walls of lace on the sides of the glass.

Hard to pick up much in the nose. What is there is fairly chocolatey, full of dark and milk varieties. Burnt toast and earthy hops make up the rest. Not much to see here.

The flavor’s a little better. Earthy like soil, with bitter dark chocolate, a touch of sweeter cocoa and maybe some oats at the swallow. Some bitter coffee notes soon emerge as well. Balanced, but nothing special.

Medium-light body isn’t quite watery, but it’s close. Smooth, with gentle, massaging carbonation and just a little fizz as it moves. Bitterness is noticeable, but not out of line for an English-style porter like this. No alcohol.

I have nothing bad to say about Petrified Porter. I also have little good to say about it, other than it’s balanced. A very drinkable, very forgettable porter. I’ll stick with Achocalypse next time I visit.

A - poured with a small head of light brown foam on to of a black body. The head settles quickly and leaves light lace.

T - dark sugar with notes if caramel, chocolate and smoke. Some light licorice in the middhe and dark bread notes through the finish.

I bought a bomber of Petrified Porter back in March of 2008, and somehow it got lost in the cellar and definitely is a little older than it should be. That being said, I was quite surprised by this one.

A: Poured into an imperial pint, This one came out nice and dark with just a little ruby-red light coming through. Minimal head, not surprising considering how long it's sat.

S: Funky, but in a good way. There's still a good bit of malt character to it, but also a really tart cherry scent.

M: Not all that full, with how tart it is I'm not sure you would want it to be very full though. Keeps you focused though!

D: It's gonna be hard to get all the way through the bomber, but not because I don't like it. There's just a whole lot of flavor going on there, it's a little bit overwhelming

All told, take this review with a grain of salt because of the flavor. As I recall when I had it on tap at the pub there was definitely no sour flavor at all. That being said...let it sit for a couple of years and get funky, it turns out pretty well!

Very dark walnut brown, it had a low head, but nevertheless left a nice bit of lace. Chocolate malt aroma was faint, but that was followed by a surprisingly strong malt flavor with a firm bittersweet hoppy aftertaste. Certainly on the strong side for a porter but even so it's not a stout in disguise. A solid and very pleaasnt entry in the porter world.

Pours a clear very dark burnt amber red color with a small to medium sized light brown head. This porter has a decent lacing throughout the drinking of the 22 ounces.

A light sour citrus mixed with a light dark chocolate malt aroma is pretty light overall but you mostly notice it when you take a drink. Speaking of drinking this porter has a very nice chocolaty malts taste that blends with the light smokiness o this beer.

A light dry aftertaste with hints of smoked or roasted chocolate and a empty bottle is all that left given a little time.

On tap at the brewpub tonight.

The beer pours a dark brown color with fair head retention and little lacing. The nose is unimpressive, consisting of a fairly simple array of coffee, light chocolate, and some underlying roasty malt. Flavors replicate the nose, but I'm really surprised by how light this porter is, and how little flavor it delivers. Also, this is almost a cookie cutter recipe porter, tasting very much like most of the other brewpub porters I've sampled over the years. It's not unpleasant, but it's nothing to get excited about either. Mouthfeel is light to medium bodied, and drinkability is OK. However, the flavor profile was so boring and uninteresting, ultimately I didn't bother finishing my pint.

Nothing wrong with this beer, but there are just too many other exciting options for me to ever want to drink something like this.

Poured very dark brown to black with modest head that retains well. Nose is somewhat faint, but the flavor across the palate makes up for it considerably. Rather clean tasting, with a gorgeous roasty flavor that is hard to beat. Beer has a creamy character to it as well. Nice body and relatively easy to drink.

Tried a 4 oz sampler of this on my recent trip to the Prescott Brewing Company. This beer is a dark brown color. The head was 1/4 inch when served to me and settles to a thick tan ring lining the inside of my glass. Aromas of roasted coffee and chocolate are present. The taste pretty much follows suit, rich dark chocolate and roasted coffee flavors along with a dash of caramel and maybe a hint of dark fruit. Rounded out with some slight hops. Very nice! Has a bit of a crisp, but mainly smooth and sort of frothy medium bodied mouthfeel with moderate to heavy carbonation. Easy to drink. A damn good porter here.

Thanks to hopdog for sharing this growler...
Appears a dark brown, nearing black with auburn highlights, and a small, light tan head that quickly fades into a small cap, and collar. Scattered lacing is left around the glass.
Smell is of cocoa, pumpkin, smoke, dark fruit, earthy clay, and brown sugar.
Taste is of the same mentioned aromas with sweet sugar, Autumn squash, ripe fruit, and cocoa powder.
Mouthfeel is medium bodied, sugary, fruity, with doughy yeast clinging to the palate.

Smell: Smell of smoke is quite obvious. A little bit of an oak like smell. An aroma of mocha scent is also apparent. Its smell is a little weak though.

Drinkability: A very drinkable porter. Went nicely with the fish and chips I had. Bravo!

Tipping the bottle earthward releases a an inky black flow of liquid into the glass. A thin yet creamy mocha head develops gradually and dissipates after a few sips. A pleasently thick halo graces the outer edges of the glass for quite some time and a thin haze of bubbles coats the surface. Very attractive.

Speaking of sips...a pleasing sweetness graces the tongue as it enters the brew. Drawing it into the mouth, a salty-sweet dryness takes over the middle and sides of the tongue, and upon swallow the dark chocolate/coffee bitterness takes over the mouth. The end is really very dry with great roasted coffee and smoke in the finish. Mouthfeel is slick and smooth but with just enough body to coat the palate.

Another great beer from Prescott, though this one is in another league from the others I've tried of theirs. Easily drinkable, FULL of JUST the right flavors and great balance between the sweet and bitter aspects. I keep looking forward to the next sip and will be sad to see this beer go. Truly a wonderful Porter...perhaps the best I've had, so far.

Tarry crimson shadows below a buttery tan dome.
Fragrant of mocha latte, cocoa powder, toasted pumpernickel, cinnamon, and dried spearmint.
A roasty, toasty upsweet begins things, with a languid coffee bean essence into a broader dark chocolate. Grain pops out, with dark breads and husks. A smidgen of smoke in the middle, along with a vanilla toasted coconut incense. The hop conclusion is woody and dry, with accents on stalks and pressed leaves.
Light bodied with modest carbonation. It carries the mild, easy-goingness of many English porters...and also their insatiable drinkability.
All told, this is an absolute top of the heap standard American Porter.

The beer pours that inky brown to black color that I find so appealing in my beers. Humongous chocolate brown head, thick glutinous sheets that weld themselves to the glass. Big nose, malt, hops, toasted grains, caramel with hints of nutty sweetness, a most Sniffable beer. Front ambrosial, the top middling in mouth feel. The beer finishes with spectacular hop spiciness, chased by the meaningful carbonation, topped off with a semi sweet malt dry aftertaste. I find this beer exceptional, and wish it were more readily available, because it would always be on hand at Guslers Beer Palace.