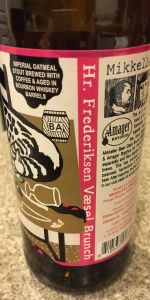 A blend of Hr.Fredriksens (Amager) and Beer Geek Brunch Weasel (Mikkeller) - then aged in bourbon barrels.

4.37/5  rDev +7.1%
look: 2.75 | smell: 4.5 | taste: 4.5 | feel: 4.25 | overall: 4.5
Pours a black color; what khaki-colored head exists fades away in literally no time whatsoever. I don't seem to get much distinct bourbon from the aroma, but I do get a lot of general oak barrel notes. I also pick up lots of luscious dark chocolate, dark fruits, tobacco, anise, coffee, vanilla, and that textbook deep roasted character I really like about European-style imperial stouts. The lack of nuanced, defined bourbon qualities is literally the only thing to ding about the aroma - it's fantastic and complex otherwise. The flavor profile opens up with a mildly hoppy flourish...and then explodes in a symphony of vanilla, dark chocolate, (good) coffee, and oak barrel. The finish is loaded with notes of cream and dark fruits. Again, the only real nitpick is how there isn't much bourbon definition (though the actual barrel presence is quite impressive on its own), and it barely registers as a blip when it comes to my overall enjoyment of this product. It has a silky smooth texture and a clean finish simultaneously. Carbonation is fairly low, not excessively so. There's a bit of oatmeal sliminess on the finish that seems to artificially thicken the otherwise medium body, but it's no big deal: just another pointless nitpick that doesn't detract from a fabulous stout.

I remember sampling the non-BA version many moons ago in DC and absolutely loving it. I'm happy to report that its barrel-aged counterpart rocks. With the Shelton Brothers no longer existing as an organization to import this delicious libation onto American shelves, I will absolutely seek it out and horde this sucker. Avoid at all costs - any remaining bottles on the shelf should be bought by me and me alone!

There's not a ton of actual bourbon here - more like pure barrel with oak and vanilla. The base stouts are super Euro in design and feel - with big roast, some licorice, dark fruit, tobacco, etc. There's dark chocolate, and a touch of complementary coffee character. The coffee far from dominates, which is expected, as only half the blend has coffee in it.

This is medium bodied, and very creamy, with a touch of bitterness on the finish. There's very little booziness here.

I thought I would either love this or hate this, and luckily I love it. This is exceedingly well done.

Sweet coffee up front on the nose. Booze and chocolate follow.

Barrel notes jump out first on the tongue. Lightly boozy. Coffee is gentle. Sweet with a caramel/toffee character.

Syrupy rather than thick. Lightened as it warmed up. Pleasant.

This is a very nice BA coffee stout. Many thanks Bob.

The pour here is an oily, tar-black color with a thin, not-very-retentive head that nevertheless leaves behind some alright lace. The surface is like an oil spill itself, covered with a thin veneer of foam, but the legs here seem oddly great. Overall, it's definitely not the best stout pour I've seen recently, but I bet the barrel-aging did something to this one. I will give it the benefit of the doubt in hopes that it can make up for the average appearance with a great follow-up when it comes to my other senses.

The nose definitely seems promising, but it won't be for everyone. Whiskey and roasted coffee right upfront with strong tannic character and some light notes of dark fruit and intense dark chocolate. It's kinda damp and vanilla-forward with a super-aged whiskey element that might not be to everyone's taste. I don't really know if it's even quite to _mine_, personally, but it's not bad. It just almost has this feeling of being a beer pulled from a cellar where it's been sitting for like five years already. There's no bottled-on date, so perhaps it actually is that type of situation, but I know my store only recently got it so I'm not entirely sure. It's definitely hot smelling and a lot of the subtler "oatmeal stout" characteristics are certainly lost. This is barrel-focused, for sure.

Nice smooth flavor profile that leads off with creamy oats (which I'm glad are actually present here because I was worried this would be just a generic whiskey barrel stout from the nose, to be honest) and toffee before fading into some rich coffee and whiskey flavors. Tannic barrel notes and vanilla aspects take up the rear, while the main thrust of the flavor is a big, burly stout build with tons of roast. Chewy and, yeah, super hot. This is almost unnecessarily strong tasting, honestly, but some people like that kind of thing. If this is, somehow, an older bottle, it definitely hasn't seen its strength tempered by the passing of time, that's for sure. Good feel; hearty and warming (duh), with a good grain backing and fun flavors. I mean, if you're a BA stout aficionado, this probably isn't going to have much to it that you haven't already tasted, but it's obviously decent to give a shot to if you see it around. It's expensive, though. I wouldn't buy it again for this price, but it was good to try.

A- 500ml bottle into a tulip with a midnight sky body and a one finger very deep nutty brown head. Cap makes it to a cm high with a thin foamy texture and fair retention. Nothing remains and lacing is rare.

S- A very smoothed out Bourbon barrel leads things off nicely and leads into great coffee and chocolate notes. The barrel brings a lot of that old oak vanilla as well as spicy whiskey. Roast charred grains throughout. The coffee is a smooth medium dark roast and both milk chocolate and dark chocolate come to mind. Sweet sweet Bourbon dessert.

T- As in the smell the Bourbon barrel is really the driving force of the beer and in this brew that is not a problem. Both the whiskey, oak wood and vanilla flavors are excellent and lend themselves to the base beer quite nicely. Very smooth espresso and milk chocolate flavors and a medium sweetness. Vanilla caramel bourbon chocolate espresso drink.

MF- Light-medium bodied for the style but since the beer is kind of vanilla/bourbon driven this makes it feel more drinkable and works out well enough. The carbonation is somewhat on the low side and the texture is slick and silky/frothy. Ends a bit warm.

3.88/5  rDev -4.9%
look: 3.5 | smell: 4.25 | taste: 4 | feel: 3.5 | overall: 3.5
$ 17.70 (Including shipping)/500 mL capped bottle ($ 1.047/oz) from Tavour, Seattle, WA.
Undated bottle. Stored at 42 degrees and served at 57 degrees in a hand-washed and dried Jester King snifter.
Appearance – 3.5.
First pour – Dark brown, clear.
Body – Dark brown/black, opaque. When held to the light, still opaque.
Head – Average (Maximum 3.5 cm, aggressive center pour), tan, medium density, below average duration, diminishing to a three mm circlet and a heaped rocky cap.
Lacing – None.
Aroma – 4.25 – Roasted malt, chocolate, some dark fruit, coffee.
Flavor – 4 - Begins with roasted malt and alcohol (10.7 % ABV). The chocolate peers from the background and the coffee and dark fruit are undetectable. No distinct flavors of either bourbon or barrel can be detected. No dimethylsulfide, no diacetyl.
Palate – 3.5 – Medium, slightly creamy, lively carbonation.
Impression and summation – 3.5. -0.25 point for being too cheap to put a date on the bottle. The aftertaste is dominated by alcohol fumes and destroys the roasted malt goodness, rather than enhancing it. ‘Way overpriced for the quality.

Original review 5/31/19, update 4/13/20
With nearly another year aging in my beer reefer, the alcohol fumes have dropped significantly and the chocolate has moved to the forefront. Still no coffee or dark fruit.

T: Tasted of a fair amount of malt (present throughout), a decent bit of dark chocolate (could've used more), some char, a good shot of bourbon (and its accompanying oak barrel), and a lot of coffee. This is one of those flavors that grew on me. It's a boozy and burnt at first, but it settles down and the other ingredients emerge. Complex and tasty.

F: An average amount of carbonation with a warm, smooth finish. Medium-bodied.

Reviewed by AlarmClock314 from Wisconsin

Big coffee and oatmeal notes in the smell but lots of maple syrup like sweetness takes over after a few whiffs.

The taste is way too sweet for my palate. Coffee and oatmeal are overwhelmed by the maple syrup like sweetness. Hot as hell and now I'm getting some cinnamon flavours.

Full bodied with just the right amount of carbonation.

I realized that this would be a sipper because of the abv but it's a VERY slow sipper for me. Worthy of ~$12 for the 500ml bottle? Yeah.

O - This beer is blended incredibly well. Even though it was the very last pour from the keg, it was still good.

Reviewed by DrinkThemAll from California

A- Pours an opaque black with minimal Khaki head, that dissipates rather fast. Spotty lacing with a ring of head that stays behind. Very nice looking beer

T- Oatmeal, cocoa nibs, faint coffee, vanilla and bourbon. Maybe a hint of Tabacco. Nice hoppy semi dry finish. Flavors are very well blended and smooth. The Coffee beans take a backseat in the brew, which I like.

O-I would compare this to Founders Breakfast stout. You can't taste the almost 11% in this beer, nor does the coffee really dominate. It's a little too mellow for being bourbon aged, and the Alcohol content. Very easy to drink, but I would prefer a Founder Breakfast before this one. Nonetheless, it's a good sweet sipper

Reviewed by Pliny_the_Self-righteous from California

3.75/5  rDev -8.1%
Not getting much barrel. Maybe a bit of vanilla and oak only. Good coffee and roasted malt bitterness. On the thin side. A hint of dark fruits in the after taste.
Dec 03, 2014
Rated: 4 by Nick_isthatstillcool from Florida