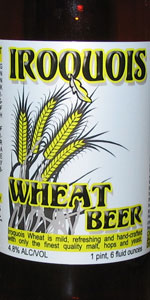 A-Clear yellow orange, not much carbonation or head.

S-Malt, wheat, straw, lemon, grass but something metallic as well.

T-Malt, some wheat, not balanced with the lemon. Some orange as well.

M-Lighter, not much carbonation and watery.

O-Was hoping for more out of this one. They don't make lights out stuff but this was especially bad for them

22oz bottle served in a weizen glass and a standard pint glass.

L - chill hazed golden yellow color with a fluffy white head that sticks around for a while.

S - lots of malt and wheat with a hint of lemon zest.

T - same as the smell the malt is very upfront with a lemon tartness on the finish.

A: Pours a completely translucent piss yellow with some orange hues. There is about one full finger of pure white head that settles nicely over time.

S: This beer smells mainly of grains, but there are some great fruity notes in there as well. I'm picking up notes of peach, apricot, and orange. It smells extremely refreshing.

T: This beer starts off smooth and sweet. There are flavors of rose hips, citrus, grains, and light malt. It's a really nice. I'm not overly impressed, but the flavors are really solid.

M: Light bodied beer. It starts off sweet and wet. The flavors linger on the palate for only a bit, and it finishes crisp and a bit dry.

O: This is a really solid wheat beer. I don't know if it is on par with beer like Dancing Man Wheat, but it's pretty good.

Enjoyed in a pilsner glass

A: pours an incredibly clear light hay color with a finger of wjite head that dissipates almost immediately, has a ton of carbonation bubbles, leaves a tiny Mountmof lacing on the glass
S: sweet kind of like cider, very apple like scent
T: sweet with a certain tartness, nkt really like any other wheat beer ive ever had, really uncharacteristic for the style
M: strong carbonation in the begining with a bit of odd tartness in the middle and slight dryness at the end
O: did not find this brew to even be close to the style, it drank nicely but really wasnt what i was lookingnfor when i bought it

The aroma has a big wheat twang and some lemon zest.

Up front is a buttery flavor that has a touch of caramel with it. The majority of the flavor profile consists of a ton of malted wheat that is a little bit peppery with just the smallest touch of lemon zest. Some spicy and citric hops in the background add some bittering to the finish. The after tastes remind me of cereal. I really like the middle and the finish, but I'm not so sure about the initial flavor.

The mouthfeel border on creamy, but then the carbonation takes over and it explodes on the tongue.

This one is an easy drinker, and the hops in the finish make it easy to drink more.

Thanks to beertruth (via number1bum) for this one. A 22 ounce bomber bottle poured into my standard shaker glass. The ale appears a mildly hazed, pale straw yellow color with barely a finger of off white foam. The head vanishes within seconds of pouring. Nose and flavor consist of sweet, lightly toasted cereal grain, pleasantly bitter, grassy, some lemon peel/oil notes, a hint of caramel that's more evident in the aroma than the taste. Quite crisp and somewhat clean. Above average carbonation with a light, thin body. Overall, a decent drinking, low ABV ale that worked well on this warm, late summer evening.

A: The wheat beer is pristine, crystal clear with a pale straw glow. A light film of condensation coats the outside of the glass, creating a bit of haziness. A finger of head quickly dissapated to a thin band. No lacing.

T: I'm torn on the taste. A mild buttery flavor appears upfront before yielding to the wheat, barley and hops. The hops are citrusy with a nice bite on the backside. Cereal barley, along with the wheat, are grainy with a light citric lemon flavor. The yeast adds a spicy flavor, adding some cinnamon flavor (almost like Crack'd Wheat).

M: The mouthfeel is very sweet upfront before transitioning to a fuller hoppiness. I'd prefer a quicker transition out of that sweetness.

D: Weighing in under 5%, this is a nice sipping ale. A good pale wheat ale that doesn't try to be a hefeweizen-light. It certainly blazes its own trail.

Pours slightly hazy golden, with a torrent of carbonation, producing a lively though shortlived head. The aroma is light and wheaty. The flavor is strongly wheaty, though clean and crisp, with a hint of cereal sweetness on the finish. There is a strong bitterness on the back end that is a surprise, though not at all unpleasant. The mouthfeel is thin but well carbonated. A good American style wheat.

Met up with Lum at the Empire Brewfest and he hooked me up with some Horseheads brews, thanks man!

Pours a clear rustic gold with a big two finger fluffy white head that dies down to a thin layer of bubbles. Lacing is very minimal, but there is the ocassional web of stick left on the glass. You gotta dig your nose in to the glass to get a good whiff. Smell begins with sweet bubblegum, pale wheat, and a touch of citrus hops. Some light grains and caramel malt tickle the nose as well. Taste begins with more of that bubblegum sweetness with a grainy wheat. Sweetness dominates throughout with candy sugar flavors, honey, and a touch of caramel malt. If this is an ale, I'd like some bittering hops to balance it out a bit. Still, nice refreshing flavors with this one. Medium body with soft feel and steady carbonation. Not a bad beer, throw in a few more hops and I could see this being a winner. Thanks again Paul for the trade. The Expedition Pale Ale is going in the fridge right now!

The beer pours a pale gold color with a thick frothy white head that slowly fades to lacing. The aroma is good. It has a light pale and wheat malt scent that is clean and a bit sweet smelling. The taste is decent. It has a crisp, pale and wheat malt flavor that goes down easy and finishes dry and bitter with a mild hop bite. I was told from the brewer that he wanted to brew a different type of wheat beer; one with a little hop flavor. It's clean and easy drinking, but I'm not sure I'm a fan of the hop taste. It almost drinks like a pilsner or blonde ale. The mouthfeel is fine. It is a low bodied beer with good carbonation. This is an interesting beer. The malt bill is simple, but the taste really is different. I'm on the fence with this one.