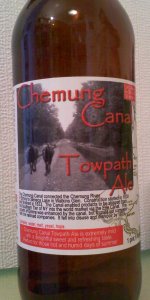 Poured from growlers. Decent head as well as lacing throughout. No real corn characteristic to speak of which is usually prevalent in traditional cream ales, but this was a pleasant surprise. Definitely buttery malt flavor with just enough clean hop bittering to balance it out. Solid beer, will absolutely purchase again

A: The beer is hazy golden yellow in color and has a light amount of visible carbonation. It poured with a quarter finger high white head that died down, leaving a patch of bubbles in the center, a collar around the edge, and a thin layer of bubbles in between.
S: Light to moderate aromas of grassy hops are present in the nose.
T: As in the smell, the taste has flavors of grassy hops along with some hints of spicy hops in the finish, both of which contribute a light amount of bitterness. Notes of underlying pilsener malts are also noticeable.
M: It feels just about medium-bodied and a little creamy on the palate with a moderate amount of carbonation.
O: This beer has some nice creamy properties to the mouthfeel. It is very easy to drink and can be considered as sessionable.

This poured light golden amber with a little haze and a thin head that didn’t last long. A few pilsner bubbles are up bombing lazily from the bottom of the glass. Fell to a cap, then a film and some wet lace. Nose is gentle, grass, faint spice, bread, caramel, herbal hops. It’s floral, has a touch of sweet lemon and is really appealing. Taste is mild, and creamy. Spicy, some wheat, and plenty of bread and honey. There’s a mild bitter from the hops and some refreshing wheat dryness in the finish. Body is light and creamy smooth with a nice sweetness that stays all the way through the drink into the dry finish. Golden, easy and very pleasant on the palate. It has good balance without going too far into malt heaviness or sugary sweetness. Good strong yeast qualities. Carbonation is perfect and actually lightens the body. Basic and delicious.

Horseheads can really hit it and when they do it’s fantastic. This is a very good offering from them in a lineup that can be a little iffy. I would buy this again. Great for summer and sessionable.

Local cream ales have to stack up to Genesee. It's not exactly a high bar to clear, but this one doesn't. It's kind of slick, with no real flavor jumping out to the palate at all. There's a little bit of malt sweetness, but that's it.

Poured from a 22oz to a pint glass

Appearance: Looks pretty light and golden, with an initially billowing head that settles down fairly rapidly. Nice bubbles toward the top of the glass.

Smell: Some malt sweetness and some spice, though minor on the latter.

Mouthfeel: The beer's best trait. Deceptively smooth, and mildly creamy, for the amount of carbonation.

Overall: Maybe I'm just not a cream ale fan, but I expected much more from Horseheads. I have a sinking suspicion I'm giving this higher numbers because it comes in the bottle from Horseheads. Maybe it's just a style that's not too nuanced or diverse. I'm not sure. However, it seems right for the summer, and it's refreshing, so you can't go wrong there, to a certain degree I suppose.

My first Chemung Canal from Horseheads. I never had this brew even though it's a regular for Horseheads Brewing. This is probably refreshing as it gets for a summer day.... pouring into my horseheads mug

A- Chemung Canal pours a darker macro look with a hefty head of white foam. No lacing whatsoever, but the brew is still inviting when I just gone done running two miles (i'm chubby, give me a break)

S- some fruityness and malt scent with some spices as well in the scent. It's actually quite appeasing. While I know it has the cream properties, the scent reminds me of a prima pils scent on a warm day. I like it

T- good malty flavors are matched with some spices and wheat. Even some banana flavors are present. As one reviewer already posted, I think this is Horsehead's Budweiser brew for the summer. Very good taste that represents a great cream ale.

M- CREAMY and carbonated. Great feel that is matched by great feelings in the mouth

D- Chemung is wickedly drinkable. This is a very good beer that is off the charts sessionable. I will always come back for more of these. Horsehead's knows how to craft brew

Picked up at the HorseHeads Brewery a few days ago.

A-Clear yellow, carbonated. No lacing is left behind at all

S-Some wheat, but rather bland and hints of alcohol.

T-Wheat and some banana. However nothing here impressed me. A little bland once again, no bitterness whatsoever.

Chemung Canal Towpath Ale (at least it rhymes if you say it five times fast) pours a deep golden body that's slightly hazy beneath a creamy head of bright white. The body appears almost orange in the full glass; and the head holds quite well. Unfortunately it doesn't leave much in the way of lacing.

The aroma is fruity and gently caramelish with a hint of grainy sweetness. Nice maltiness! Some minor hops are present in the background as well.

In the mouth it's gently carbonated and creamy with a medium-full body.

The flavor follows the aroma, and it's nicely malty with a fruity and floral edge surrounding it. It's grainy, softly caramelish, and just a touch nutty beyond that. The fruitiness of the yeast appears here and there, but the hops keep a consistent underlying presence except for occasional flashes across the middle, and a continuos presence in the finish. They're floral, a bit spicy, and even a touch spruce-like.

Tasted hedonistically, it's an impressive beer. It's on the sweetish side, but it keeps from going too far over the edge, and the hops towards the finish help to reign it in and round it out. And although it's fairly basic in its composition, it's a damned good basic type beer. It doesn't rely on a varied grain bill or lots of hop flavor to make it work, it's just about a nice quality malt that's judiciously infused with hops. I guess its size and maltiness help it out however.

As to drinkability, I think that anyone who enjoys a well made beer with a good bit of character should enjoy this. Even hop heads should be able to appreciate the malt base. And, I think it also crosses over to people who normally drink more mainstream beers because it's malty sweet and not so hoppy. I enjoyed it, and I'd have gladly had another one. Well done!

Never heard of this brewery until I found this bottle, along with a few other Horseheads offerings at Halftime a few weeks ago. Very pleasantly surprised.
Appearance: Somewhat cloudy golden yellow color, with a 1" head that dissipated fairly quickly. Smell: Sweet maltiness, with some grain and yeast.
Taste: Similar to Smell. Sweet malt, more similar to a Pilsner, with some stronger yeast overtones.
Mouthfeel: creamy (obvious)
Drinkability: Had this in a bomber, and only planned to drink one 12oz glass, but went back and finished off the bottle. I will be going back for another

The beer pours a beautiful golden color with a thick frothy white head that slowly fades to lacing. The aroma is good. It has a sweet Munich malt scent that's clean and refreshing in the nose. This is their "Bud" type beer for summer. They focused on using German malts and not so much hop content. The result is a smooth, malty golden ale that's highly drinkable. The taste is good as well. It's a straight up easy drinking beer with a smooth pale and Munich malt flavor. It's well balanced with just enough hops, but not enough to detract from the malt experience. The mouthfeel is great. It is a medium/full bodied beer with adequate carbonation. This is a little too full bodied for a typical summer ale, but it's a great beer regardless. This little brewery continues to keep me interested. Good Job!