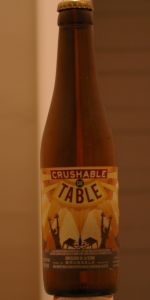 Notes: A collaboration brew between Julie, Jean and Magic Man from Tired Hands Brewing Company and the De La Senne team. Made in Brussels on August 13, 2014.
View: Beers | Place Reviews
Reviews: 3 | Ratings: 24 | Log in to view all ratings and sort

I must have been truly gainfully employed to have paid $8.00 for a table beer! There is NO way that I could do so at this point & I am kind of surprised that I did so at one time. That much for a 3.2% beer seems outrageous. Ah, well, such is the nature of the Bottle Backlog here at Chez Woody. Surprises seem to appear at every turn.

From the bottle: "A collaboration brew between Julie, Jean and Magic Man from Tired Hands Brewing Company and the De La Senne team. Made in Brussels on August 13, 2014."

A light film of lees was evident on the punt, so when I Pop!ped the cap, I employed a VERY gentle pour. It showed a wonderful effervescence as I poured it & when I was finished, there was no need for any agitation as it produced a finger's cap of dense, rocky, bone-white head with excellent retention all on its own. Color was Yellow-Gold (SRM = 4 -5) with NE-quality clarity & loads of CO2 bubbles in evidence. Naturally, this prompted a visit from The Gelt Gang of Mammon, Midas & Croesus, all of whom wanted a taste. I happily obliged as I was less-than-enthusiastic about a table beer. I wonder what I was thinking when making such a purchase. Nose had a lemony citrusiness and a slight sharpness, almost as though wheat male were involved, but given its clarity, I would be dubious of that being the case. The nose reminded me of Troegs Sunshine Pils, if you are familiar with that beer. Mouthfeel was light-to-medium, not watery, but not much beyond, either, with a decent amount of effervescence. The taste was oddly light and almost imperceptible. There was a light bitterness of grassy hops and I continued to think of a Czech Pils. I looked at both the site's Styles section as well as at the BJCP description & it seemed to be in keeping with the style, but I was not getting much out of it, where I have had other beers in the style which were more flavorful. Hmmm. Finish was dry, citrusy, bit mostly forgettable. I will now indulge myself in some buyer's remorse. Boo hoo.

thanks to tenderbranson69 for sharing this with me, enjoyed chilled from the bottle in a glass.

The color is a light golden with slight haze and average sized bead with streamers of lace sticking. The small has a sulfuric quality of yeasty aroma with light lemony quality. The feel is spritzy with light astringent and slight spiced accent with a dry finish.

The taste is much better than the smell with a gentle malt entry and mild phenolic yeast quality with a light lemon zest of hops with peppery dry finish. Overall I really liked this even though the aroma was just ok, not offensive but not great with a nice saison character that makes this quaffable.

pours a pale yellow. Smells of skunk weed. Very unimpressed. I'm hoping the skunk was from being light struck because I've heard good things about this brew before but not from regular beer drinkers...