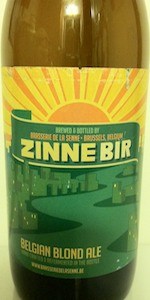 Had on tap at The Beer Temple.
(This avoids StonedTrippin's rant that this beer's obscurity condemns it to not being fresh... or worse, sitting on the shelf well past normal life.) At any rate, I hope to have this on tap again on Monday to confirm this review.

Looks fluffy, but big bubbles... not intense. Zinnebir's moderate yeast also affects the Smells which are grapefruity, but also slightly floral. Tastes are better as there is a nice balance with the bitter, a well-integrated ale. In the mouth, Zinnebir is cleansing and refreshing and crisp and semi-dry. I want to eat this with food.

Along with three others from de la Senne, Zinnebir is among "The 1001 Beers You Must Taste Before You Die" and probably deserves to be on the list since, the reviewer claims, it breaks from the traditional pale and younger, hipper people drink it. I'm glad I found out who I finally am... 66 years later !

Notes of lemon, dry grass & hints of wheat; a mild bitterness emerged as this warmed up. A nice, easy to drink Belgian pale.

on draft, in a tulip glass

Pours an amber clouded color, with a stable, big head.

Has a surprisingly smooth, medium body with a velvet touch to it. The beer manages to be refreshing at the same time, by developing a late effervescence during the finish.

Tastes of sun ripened oranges, unripe mango and bread dough. This first impression gets complimented by blueberries and slightly bitter lime atop a honey malt peak. Finishes a little spicy, with cloves and pepper among wild honey and water melon.

Interesting take on an ipa with a noteable belgian influence, recognizable by the beer‘s yeastiness. The mouthfeel and balance are great in this, while the hops fall a little short on their own.

Starts with malt sweetness, but in a hurry turns grassy and bitter, with a hint of cherios. Body is light and airy, while holding fast to a yeasty texture. Has some lemon and pepper on the nose to add to grass, yeast and hops. Fine bpa, but nothing special

330ml bottle from The Wee Beer Shop, Glasgow (£2.50):
Very much a Belgian style beer that opened with a lot of yeast & some subtle spices with the odd hop showing as well. It was  afresh beer that had plenty orange zest & lemon coming through alongside some background fruits that included apples, grape & some pears, all working well together & going down nicely.

The colour is straw yellow, the liquid is clear. The three fingers head is white and airy; it sinks slowly down leaving lots of lacing on the glass.

The smell is sweet and smooth with spices like nutmeg, cloves and allspice. Bitter hints in the background as well as some oranges and other fruits.

The taste is very smooth with growing fruity/herbal flavours. Clean sweetness and some cereals. Orange juice and ditto peels. Light to medium body. Passing exotic fruits and candy sweetness in the aftertaste as well as some green grapes and French bread. Warming clean alcohol and hints of earth in the finish.

The carbonation is strong; the many mid-sized bubbles short-lived. The liquid is semi-smooth and a bit harsh.

A highly drinkable Belgian beer. Some odd flavours here and there, though.

Pours a hazy orange color, with a medum top off white head with some nice sticky lacings on the glass. Aroma is citrus fruits like lemon,grapefruit and lime, spices, light bisquity malts and some hints off tropical fruits like pineapple. The flavour is fruity with and light spicy with a medium sweetness and a strong hoppy bitterness in the finish. The flavour is balanced quite well to, and a decent lenght on the aftertaste. Medium carbonation with a medium body, and a clean and complex mouthfeel. This beer tasted quite good. I would drink this beer again if i got the chance.

its a shame we will never be able to get a fresh specimen of this beer in the states, like, the bottle i just cracked has probably been collecting dust and allowing morning sunshine on some god forsaken warm shelf for so long its a fossil now, which really sucks, because de la senne is sensational, and this beer deserves a more fair shake here in america, which is supposed to be some sort of "land of opportunity" but it isnt for this beer, which maybe is indicative of minority populations and "9/11 truthers" and suffragists and anticapitalists before them. once upon a time, this was delightful belgian pale, but now its oxidized and bitter with notes of wet corrugated cardboard and airplane napkins. nevermind that though, lets focus on the potential here, what i know it was like way back when, honey and grassy hops and a yeast strain unique to this brewery that shows tea and lemongrass and clarity like a crystal ball. good body and appropriate strength. i have always wanted to drink a guinness or a newcastle beer close to origin to fully appreciate, and now i can add this to the list of quality beers that just do not translate well to the american market. some de la senne stuff works over here, this one does not. someday we as a country will be able to receive this beer appropriately... i hope i am around to see it...

Smell is grassy with hints of chamomille, yeast and roses.

Taste is floral and grassy, with a soft, balanced bitterness. Very drinkable and fruity, takes a bunch of old and mixes it with new. Very tasty.

It pours dark amber with a big head. Hops are fairly intense but they are accompanied by sweet malty notes. Floral and with hints of yeast. A very enjoyable Belgian pale!

Pours a clear yellow golden color with white head. Grass, lemony citrus, hay, and some floral notes on the nose; follows onto the palate. Medium bodied. Finishes with lemon zest and some grass.

From XXXII. In Teku glass. After dinner. Reading Lupuloadicto (Beerano 2014) 5.5 months after BB date. At first seemed dull, like those typical spanish amateurish brews, but a nice herbal bitterness appears as I progressed with it that make me enjoy it the more I drinked it

This beer pours hazy and deep orange to yellow. Lots of lacing stays on the glass.

No problems at all to store this beer and drink it one year after "best before" - It’s so good!

Rich gold/yellow. Slightly hoppy, grains, crisp and clean aroma. Slightly fruity, a little bitter, clean, crisp. Not much to it, but refreshing and high carbonation.

Poured from an 11.2 OZ bottle into a pint glass. The appearance of this beer is a hazy golden yellow with a large white head. The aroma is full of yeast and malt with some grass and pepper thrown in. A very complex aroma. The flavor is full of malt and fruit a very intricate brew.

On tap at Poechenellekelder, Brussels.
Tarnished gold with lumps of trailing white head. 4.25
Lemony hops, touch of must, and aspirin. 4
Lemsip up front, tangerine, some bubblegum, herbs, harsh citrus hops, some apricot, and clovey phenols. 4
Estery apple sauce and chalky linger. 4
Just past light, round, clingy. 4

Not as clean as Taras - a bit yeasty. But well hoppy to go with that yeast character, almost with lots of mineral and dough. Heavy hitter at 5.8%, but complex enough to rep Brussels. 4.25

What a beer. This one is pretty good, near perfection. Can we say session Belgian beer?!

The beer color is pale yellow, cloudy. Nice white thin head on top of it. Its fabulous. The aroma is hoppy with a very timid presence of Belgian yeast. Fuit is lemon, citrus, tropical fruit. Awesome. The taste is similar to the aroma. Citrus. Some dryness in the finish with a very well balanced bitterness. Mouthfeel is medium body with some effervescence. Bubbly! :)

Overall a pretty good beer. For me, this is one of the best. Perfect! Cheers!

Poured a golden color with a 1 finger head into an Orval Trappist glass.

The mouth feel is quite tart and fits the character of the beer's aroma, taste and finish.

The taste is citrus- although not as strong as the aroma, and not lemony.

The finish is quite good- tangy and mildly bitter.

Golden color with white head. Nice belgian yeast esters in the aroma. Taste goes along with a very balanced malt/hop profile. Body is quite smooth for the style but well carbonated. Nice one.

Just saw this was on tap and went for it. I just know De La Senne is supposed to make good beer.

Smell is mostly just floral, grassy, and a tad soapy. Basically a bunch of hops. Good to have a hoppy beer that doesn't come across as American.

330ml bottle, 5.8% ABV. 'Zinnebir' appears to loosely translate to 'mongrel beer', in reference to the mixed cultural heritage of many Belgians, and Brussels natives in particular.

This beer pours a rather hazy, yet bright medium golden yellow hue, with a full fist's worth of puffy, loosely foamy, and somewhat bubbly eggshell white head, which leaves some spotty patches of sudsy lace around the glass as it evenly subsides.

The carbonation is fairly tight, and a bit prickly in its rendition of frothiness, the body medium-light in weight, with an airy sort of smoothness. It finishes dry, the yeast dropping the final hammer, with a few grainy and hoppy essences mewling about.

An enjoyable BPA, in that is has more saison and hoppy character than is typical of the style. I'm still surprised at its affability, what with the yeast infiltrating all, but the overall crispness just sucks me in. Worth a try, even if y'all are no Brussels people.

Zinnebir from Brasserie de la Senne
Beer rating: 88 out of 100 with 283 ratings