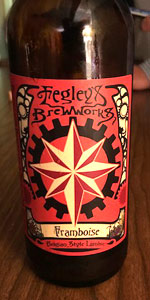 Reviewed by weltywm from Pennsylvania

Appearance: Deep dark ruby red with a little bit of lacing on top. Much darker than I expected.

Smell: Lots of raspberries with some vinegar.

Taste: Lots of raspberries and vinegar, just like the nose. Also, there is some dark sweet malt, earthy spice, some wine tannin, and other tart fruits. Very good.

Mouthfeel: Very dry, crisp, and carbonated, with a long finish.

Overall: A very excellent framboise with some unique tastes to separate it from the crowd. Would definitely buy again, and I continue to be impressed by this brewery.

Reviewed by oglmcdgl from Pennsylvania

A- comes to me with a few bubbles at the edges that quickly vanish and leave a mirror finish. The body of this brew is a light red orange with a good bit of haze to it.

S- sharp tartness and funk abound. Musty and dusty with the fruits way in the back.

T- opens up bright and sour with a bit of lemon and a solid funky wood hit. There's a fruity sweetness that blends nicely with the malts but what I am not tasting much of is raspberries I guess they have faded with time.

M- medium body with a touch of slip to it and a tick higher then lightly carbed. Good pucker from this one.

O- tasty for sure and a good attempt at the style but the fruits have fallen off a bit and needs a bit more depth of flavor.

Reviewed by hopdog from Pennsylvania

Poured a deeper and cloudy amber color with a smaller sized off white head. Aromas of brett, cherry pie filling, raspberries and light leather. I could smell this all night long. Tastes of tart and sour cherries, raspberries, and brett. Flavor a bit of a let down compared to the awesome aroma.

Reviewed by yourefragile from District of Columbia

A: Cloudy, reddish amber color with a finger of whitish head that slowly fades a way to a film with some streaks of lacing.
S: Grassy, earthy, slightly raspberry aroma, strong mustiness, fairly dry.
T: While I haven't reviewed many BBW beers, I am familiar with a large variety of them and this is by far my favorite. As mentioned by others, this falls more on the funky/tart/sour end of the spectrum away from sweet. Immediately tart from the start, followed by mild fruity raspberry flavor. Mouthfeel is full and moderately carbonated. This isn't the best framboise, but one I enjoy very much. The raspberry does seem to be a little lacking and the tart/sour turned up a little too much, but for me I enjoy this lack of balance.

2.98/5  rDev -23.6%
look: 4 | smell: 3.5 | taste: 3 | feel: 2 | overall: 2.5
The beer has a murky, light amber color and is topped by a white colored head. This has a woody, almost grassy nose to it that is clearly derived from raspberries but sot of accentuating all the wrong notes. Other aromas of musty cellars, light notes of overly ripe, funky cheese and a lot of malt character; more grassy notes, but grain this time as well as a solid cracker like aroma.

The flavor is tart up front, though not overly so and is actually quite light if this was trying to be a Lambic. The body is quite thin and watery and is lacking in the body that I would expect from a well made sour beer. Again there is lots of grain character here in the flavor, which does seem a bit out of place, but contributes notes of grassy grain and lots of cracker-like whole grain flavors. The raspberry flavor here is noticeable, but it is quite light and most definitely watered down. This definitely gets quite funky at times as I do believe this tastes like vomit. Unfortunately this is really not very good.

Reviewed by tempest from New York

I'm not always terribly impressed with Brew Works beers, but this is very well made. The raspberries only provided a tasty note on top of the sour fruit tang and malts. And the malts, that's what surprised me since I've been so used to extra sweet fruit lambics. There was actually a nice, pale ale-like, taste of whole grains along with the fruit and tang.

Reviewed by wheelinshirt from Pennsylvania

Color was ruddy orangish, hard to see it very well because of the poor lighting in the dining room. No head, absolutely no head on this one when it was brought out. Don't know if it was a bad pour or if it was just gone by the time the waiter got all of the rest of our drinks ready. No lacing. Wish it was in a different glass, like a tulip or a flute.

Smell was funky and sour upfront, led into some cranberries towards the middle and end. Don't particularly like cranberries, wish it was a kriekm but it was definately a good smell for a framboise.

Taste was very dry, sharp sourness followed by some cranberry tartness. Though this is quite sour, it finished very clean. Definately unique compared to the handful of other sour beers I have had.

Mouthfeel was crisp, dry, not too effervescent. Drinkability was very good due to the clean finish on this one. Hard not to drink it too fast. If you are in the area, definately try this one. A great bargain and a very solid lambic style beer for a local brewpub.

Reviewed by weeare138 from Pennsylvania

4.12/5  rDev +5.6%
look: 4 | smell: 4.5 | taste: 4 | feel: 4 | overall: 4
Thanks to dickinsonbeer for this treat...
Appears a hazy, light orange with a small white head and scattered lacing.
Smell is of a heavy dosage of brettanomyces complimenting the sour/citrus, and raspberry & cherry-like aromas.
Taste is of a slightly sour brett filled Belgian with mild grassiness, along with some tart berries.
Mouthfeel is tart and mildly sour but in a good way. Kind of how the sour patch kids would make your mouth pucker but you would keep eating them anyway b/c they were so tasty.

Served in a hefty glass Goblet, solid but hazed ruddy dark purple body with some reddish tones. The head was cream colored with the merest hints of pink, but it didnt really last all that long to even examine in detail, sadly it disappeared in no time. Has a lovely sharp yet funky nose, inviting and a pleasure to inhale, very much like the BBW Pêche I had late last year, the fruit punch raspberries only come into play in the back end. Lots of dryness and sharp angular textures here. A light vanilla oily feel rests in the background throughout. Sour start with some barnyard funkiness, this is soon balanced by a dry bitter skin raspberry feel in the latter third. Refreshing and thirst quenching, but only a short while after the swallow you will be wanting yet more. A very drinkable Framboise that is hard to leave alone. An empty glass just begs to be filled with more of this one!! Mouthfeel was nicely carbonated, sharp yet with a little spike on the tongue. I wish I had a Growler of this one; I could easily demolish a whole one all on my own with little effort.

Nice stuff, not one of those sweet messy Framboise so often peddled by Brewpubs but a nice fruity yet dry raspberry brew with a suitably enthralling funky earthiness that drops a few barnyard skid marks here and there to keep things interesting.

Reviewed by erica from California

4.57/5  rDev +17.2%
look: 4 | smell: 4.5 | taste: 4.5 | feel: 4.5 | overall: 5
I stopped in while walking downtown on a strangely mild spring-like January Saturday, just to see if the Framoise had been tapped yet. I was in luck, and ordered one right away. Served in a 12 oz. goblet, it is cloudy and dark-reddish, a bit orangey, with a very pale-peachy colored head that faded quite quickly into a ring. On my 2nd glass, which I think was the same glass (they usually always give you a new one), the head lasted a bit longer. Not sure why..

Smell was really great- sourness hits you immediately, followed by lots of raspberries, very fruity, and some grassy farmy stuff going on in there too. I kept inhaling this beer and probably looked like a freak. Oh well, sometimes we must do these things.

Taste was also spot-on for what I'd expected this to be, having had their peche a few months before, and knowing they used the peche barrels to age this for a while. It made me smile. The first taste is funk and sourness, though not as sour as you might expect from the smell. This was quickly joined by a fruit explosion of berries having a sort of party in your mouth. No syrupy sweetness though, that's the beauty of it. Finish is dry and just the slightest bit hoppy. One of those where you feel the need to keep replacing the sip you just swallowed..

Mouthfeel was good- fizzy, nicely carbonated but not thin at all, with a bit of a warming sensation after you swallow. Drinkability was excellent, I could probably go through growlers of this if I had the money. The menu did say it was 6.7% ABV, rather than the 6.5% listed here, though that was from 2003. It sounds like the Framboise of three years later turned out more satisfying, with the oak barrels and all that.. I had high expectations for this because of the Peche, and I think they have been met. Thanks Lewis for your last lambic at Bethlehem Brew Works!

Reviewed by ElGuapo from New Jersey

I really could have used a bit more flavor out of this brew. It was nice and crisp. There was a big tart raspberry flavor, but it really did not live up to some other lambics I have had. It had some bitterness, and some sweetness, but I seem to like lambics to be dominant with one or the other. It also had a very strange finish.