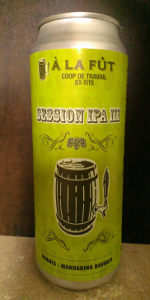 
A:
Pours a cloudy brownish clover with a airy three fingers of white head that gassily drops to a ring around the glass . Okay retention; some specks of lacing. (3.75)

T:
Flat, even, slight bitterness (barely). Mineral water, white bread, some medicinal hop dryness in the back of the throat, hop tea. (3.5)

O:
Very aromatic Session IPA.
I am trying to rate this one as what it is. That is, as an IPA it is really muted and honestly kind of terrible. But when we figure that it was deliberately brewed to be low alcohol, 'crushable', etc. it isn't so terrible. The aroma is what really stood out to me. It was definitely the best smelling session beer IPA I've had (though I am far from an expert). The palate was also just how it should be, vaguely substantive, but generally light and unobtrusive. This beer doesn't inspire a bunch of adjectives or descriptors but I suppose it isn't meant to. My main gripe is that it is pretty damn expensive for what it is (and that is *ignoring* the fact that it is only 3.5% ABV). It was neat to try, but I would rather get a fine 'normal' IPA. Honestly, the main thing I took from this beer is that these guys could probably make a solid IPA (if they don't already, I don't know). (3.75)