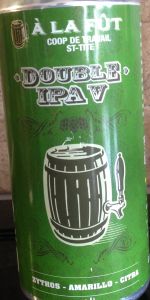 Can: Poured a hazy dark orangey color ale with a medium size foamy head with OK retention and some lacing. Aroma of tropical fruits and citrusy floral hops with some vegetal notes which are really enticing. Taste is a nice mix of tropical fruit notes with some floral citrusy notes, residual sugar and almost no bitterness. Body is full with good carbonation. A little bit on the heavy side but nice hops presence with limited bitterness.

O:
Interesting beer.
Neither great nor terrible. A little weird, though.
It looks very nice. The flavor is a nice mix of sweet and woodsy. There is a rich caramel malt backbone that keeps it all together, but also keeps the hops from completely asserting themselves (flavor-wise). It feels velvety and the alcohol is well-hidden, but damned if the smell is not completely off base with stale water being filtered through gravel. I don't know if this is a problem with packaging or ingredients or what. All I know is that this is the first of their canned hoppy offerings that I've had in which ONLY ONE part of it had this distracting, water-rung-out-of-an-old-dishcloth aroma. My going theory is that it is a storage problem with the hops they are using or a lack of dryhopping/aromatic hops at the right times(?) because I have only picked this flavor up in their canned and mainly hoppy beers. I have additionally tasted/smelled it in some other "up and coming" beers out of Quebec... Who knows?
I probably won't have it again which is strange because on the whole I thought it was good and it is easily the best of their hoppy beers I have had, but we'll see. These guys have potential but for the cost of the beer it makes it hard to keep giving them a shot. (3.25)

edit: So, like a moron, I bought two cans of this thinking that if it was good I'd send it to someone. After drinking the second can, I dropped my original score. It has the components to be a decent beer (even despite the terrible/lack of aroma) but everything is misplaced and kind of clashes unpleasantly. Still, I do think this is one of the most well-executed hoppy beers I've had from them.