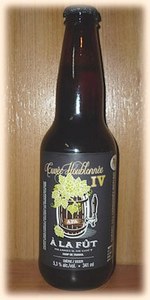 Bottle thanks to ZorPrime, cheers Eric. 341ml into a tulip, February 2012 bottling. 29 IBUs as per the label.

Clear golden orange with an offwhite head, some browner spots indicate that I may have poured some yeast in here with this but the body doesn't really reflect this - not sure if this was bottle conditioned or not... Regardless, a nice citric nose, some orange, a bit of lemon with a pale, dry crackery malt. A bit grainy, and perhaps a bit of the sharpness of the citrus accents this. Pale malt on the palate (as expected), again with a sort of a crackery feel. Hops add some flavour in terms of some citrus, but again, as I've found in their other brews, there's a bit of household citrus cleaner character to be found. Herbal bitterness with some more citrus notes as the flavour fades. Bitterness is moderate at best, and motuhfeel is a lighter medium. Not a bad pale ale, but not up my alley either.

Cuvée Houblonnée IV from À La Fût
Beer rating: 3.64 out of 5 with 5 ratings