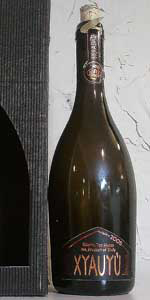 Look: Amazing. Flat, dark brown/burgundy. Looks like bourbon but somehow more ...beautiful? In a Baladin Teku, next to the beautiful bottle. A treat just to look at.

Smell: This one hits you in the face with that beautiful Xyauyu smell. Not the barrel-aged version but it might as well be. Bourbon whiskey and dark fruit, exactly what you want to smell.

Taste: I could go on for hours about this. But it's hard to describe without trying it for yourself. It tastes kinda exactly how you would think based on the appearance and smell. It's downright perfect.

Feel: It's flat, purposefully left out in a tank until the carbonation is gone before bottling. That's how I like my barleywines. We had Sucaba tonight too but that just fell so short because of the tiny amount of carbonation it had left. Baladin got it right though. It's not too heavy, but it does coat your mouth so well that the flavor seems to linger for an hour or two.

Overall: Out of 1,500 or so beers I've had over the past few years, this is hands down the best. I was happy I got to split it (the cost) with two other people, but now having tried it, I will be going back soon to purchase another bottle for myself. More complex than most barleywines like JW Lees and such, and more well-balanced than Utopias. A real treat.

Edit: Received another bottle as a gift and cracked it. Still an absolute pleasure to drink. Taste is a mix between bourbon, Tawny port, and Utopias. We enjoyed half of it then recorked it. A few days later, it's still just as good. Gotta love how they deoxidize this one before bottling. Over 2,000 beers now and this might still be the all-time favorite.

A 2005 cracked on New Year's Eve 2014, the eve of its tenth birthday. Poured into a Bourbon Barrel Temptress 2014 snifter. Purchased off a shelf the same day, cooled in a 40 degree room for 5ish hours before being opened.

Appearance: Completely flat, no head, translucent copper to amber body. Thick and syrupy, clings to the glass. Exactly what I was looking for in this beer.

Smell: Boozy, lots of dark fruit, mostly raisins, with prominent vanilla and oak notes as well. Very port-like. Which makes sense considering the age and style of this beer.

Taste: Raisin juice. Mixed with molasses. Hints of toffee and vanilla come through, and the raisin flavors stick around after everything else is gone. Dried figs in there too. Some boozy heat, but not too much. My mom couldn't tell it apart from port. Definitely a lot of similarities, that oxidation really worked well here.

Mouthfeel: Flat flat flat. Not even a hint of carbonation, but I really wasn't expecting or wanting any. Sticky and thick, this really seals my lips shut. Long linger on the palate, consumed by the raisin and fig flavors.

Overall: Not quite as complex as Thomas Hardy or Utopia, but a lot of similar flavors going on for sure. I love these flat super-aged beers. Probably would have been better off with the JW Lees which was a quarter of the price, but I'm very happy to have tried this.

A huge thanks to Eric and Matt for sharing both gold and copper at our recent Houston BA tasting at the Gingerman.

A: Pours a still, ruby red color. A minimal beige head forms, but recedes to nothing in a second. Basically what you would expect for such a beer.
S: Warm, toasted malts throughout. Caramel sweetness, vanilla, chocolate. Dark fruits like cherries and plums A bit of oxidation which really adds to the complexity.
T: Like the nose, the malty character is amazing. Toasted and caramel malts. Certainly sweet, with vanilla and chocolate. Dark fruits, and very sherry like. A bit of oxidation, that is very welcome. Incredible.
M/D: A big full body and low, almost still carbonation. Though not over baring viscosity that other beers of this strength seem to have. Ultra smooth and creamy. The alcohol is there, but in check. Amazingly enjoyable to sip on. Very much like a sherry or port.

This might be the best drinking English barleywine I have had not named JW Lees. It has aged incredibly gracefully, with finesse that many beers of the same strength miss. A great treat, and very much worth the high price tag for those that enjoy the style. I love it.

2005 vintage served in a Firestone Walker mini snifter. Thanks to sweenzander for the share.

A: Pours a ruby and brownish color mix with no head forming on the pour. A few wisps are present, but overall it's very still. Reminiscent of Utopias.

S: Boozy and hot, but there is a nice caramel-like sweetness to cool it down a bit. Some notes of plum and dark chocolate with a raisin as well.

T: Sherry like oxidation. Dark cherry with some boozy notes. Raisin with a burnt sugar bitterness.

M: Flat and smooth with a medium body leaning towards the heavier side.

O: A nice sipper, like a Utopias-lite, but not as complex. I definitely wouldn't drop the coin on this version so I'm glad I could get a share.

Appearance - Ruby body. No head. A few floaties. Sugars cling to the glass.

Taste - Well it's sugary. Very fruity again. Brighter fruit, although raisins persist. Caramel and brown sugar all the way through. Boozy with the slightest sherry component.

Mouthfeel - Heavy. No carbonation. Sweet and boozy, a definite sipper.

Thanks for opening this with me, SubpoenaDeuces!

Still, clear, dark ruby, dark amber, and cherry wood in color. Leaves the glass only oily, if that, on the way down. Unexciting, but rich in appearance and appealing. A pretty color and an obviously strong concoction.

Lots of burnt sugar caramels, sherry notes, dark fruits, and a hint of honey and chocolate sweetness. Wood character as well. This is reminiscent of a sherry or a tawny port, in a lot of ways. Some oxidation aroma as well. Very nice as it all comes together.

The flavor, like the aroma, is quite sweet, but wonderfully complex. Tons of dark fruits (grape skin), toffees, burnt caramel candies, and chocolate-covered raisin combine extraordinarily well. The alcohol is remarkably well hidden, though I could feel this one coming on strong. Fantastic. Delicious and complex, though so much like a liquor in many ways, it's tough to drink a full glass of this--that is not a criticism.

I loved this one.

Dark brown in color. flat. no head. no lacing. Aroma is a mix of nuts, barrel, and caramel. taste is nothing like a barleywine. this is very sweet, almost port or sherry like. Mildly grapy, sweet, raisin, and very sweet molasses. On the thicker side of medium, but I think this is mosttly becuase of the lack of carbonation.
This would make a fine port, but as a beer, its lackluster.

Served in a shaker pint glass.

2005 vintage. Based on some high praise I've seen this beer garner, I had to give it a try, especially considering I had the disposable income necessary for an investment in a bottle. Let's do this, my first beer in 2013: It pours a brackish amber topped by a half-finger of tan foam. The nose comprises biscuit, honey, light and mild booze, and a vague sense of sweet fruits not unlike a sauternes or sherry. The taste brings in more of the same, with the sweetness really taking hold, and some cardboard-y hints of oxidation poking through every now and again. Things are slightly messy, muddled. The body is a stoic medium, with a very light moderate carbonation and a drying finish. Overall, I can see the allure of this beer to many, but it wasn't entirely my cup of tea. The sweet and oxidative notes are generally pleasant, but when mixed they don't cooperate, nor do they do so with any of the other components. Still, I'm glad to have tried this stuff, and I even hope to try the Silver and Gold editions some time in the future.

Xyauyù Etichetta Rame (Copper) from Birra Baladin
Beer rating: 95 out of 100 with 112 ratings