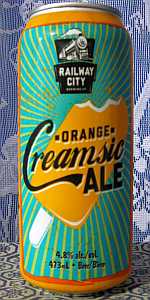 Notes: At Railway City Brewing, we hand zested fresh oranges and added whole vanilla beans and oats to create a full-bodied ale with a silky-smooth finish. Aromas of sweet vanilla and slight citrus notes fill the nose. Orange flavours dominate through the creamy mouth feel, leaving the taste of vanilla on the tongue.
View: Beers | Place Reviews
Reviews: 4 | Ratings: 12 | Log in to view all ratings and sort

473 ml can served cold into a pint glass. Review from notes. An LCBo purchase for somewhere around $3.15 CDN.

Smell - Clean and grainy mostly with hints of orange and a general sweetness about it.

Taste - Not quite orange creamsicle, but quite grainy, clean with a fair amount of oramge mixed in. A little more bitter than I though it would be which is a good thing in keeping balance and drinkability.

Mouthfeel -Very smooth, medium bodied with a fullness and a creaminess expected from a cream ale. Add some orange flavoring in and while it's not a milkshake type beer there is an element of the classic orange creamiscle in the feel.

Overall - Better than I expected and worth another sample or two. Easy to drink and enough orange and bitterness, so it remains balanced and yet meets the illusory imagery of an orange creamsicle in some manner.

Yellow with lots of fine bubbled carbonation, slightly hazy and 3 fingers of off white head.

Smells of orange juice, and a bit of vanilla, like a cream sicle.

Tastes of orange juice, orange oil, and hints of vanilla and candy qualities.

Light body, and lots of carbonation.

Got this at LCBO in Barrie, drinking on Lake Rousseau, May 29th, 2018. Very interesting brew, just a little watery in my opinion.

a shortcut to lactose and orange. lacy. first sips ok. not objectionable but not so drinkable. harsh finish and aftertaste. On tap at Craft Brasserie.

473 mL can purchased at the brewery; dated Aug 12 2017. Or at least, I think that's what was printed - the month digit is distorted so I can't be totally sure if it's an 08 or an 09 (not that it matters much, as either one would make it a fairly fresh sample). Served barely chilled.

Pours a cloudy medium golden colour, initially supporting one finger of loose, soapy white head that fizzles off over the next several minutes. A respectable-looking collar of bubbly foam holds fast, though little in the way of lacing has been generated. Looks fine. On the nose, I am getting some gritty grain husk and oat cereal sweetness, backed up by rather subdued notes of orange zest and vanilla. There's also a touch of grassy hay/straw and bready wheat in the background... not bad, but frankly it's not as aromatic as I would've hoped for something brewed with oranges and vanilla beans.

A decent flavoured cream ale that keeps things simple, more-or-less approximating the taste of a Creamsicle. Grainy barley malt and bready wheat sweetness serve as the backdrop, with orange zest flavours peaking near mid-sip, followed up with a distinct note of vanilla ice cream which rounds out the back end. A little sweet, but not overbearingly so. Medium in body, with relatively low carbonation levels that combine for a smooth, soft, creamy texture.

Final Grade: 3.94, a worthy B+. Railway City's Orange CreamsicAle turned out almost as well as I could've hoped for. I still find the aroma to be a bit lacking - but other than that, it's a solid brew that tastes pretty much exactly like you'd expect a 'creamsicale' to. I suppose it's fair to mention that throughout my childhood, the orange Creamsicles were always the last ones left in the box, as neither me nor my siblings preferred them over the pink and blue ones - so perhaps a raspberry or blueberry creamsicale would be more relevant to my interests? Kidding aside, I hope they've been trying to get this one into the LCBO, because I bet it would fly off the shelves next summer. An interesting diversion, even if it's a tad one-dimensional - don't hesitate to give it a go if it sounds appealing.

Orange CreamsicAle from Railway City Brewing Company
Beer rating: 83 out of 100 with 12 ratings