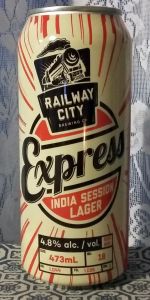 Dull gold body with chill haze, pouring an aggressive white head with big suds like a bubble bath, good retention of several minutes.
Fresh and bright citrus and spruce hops on the nose, of orange and lemon, a whisp of mango.
Taste matches the aroma, but in milder way, the flavours aren't as distinct. There's a general citrus hop note, but pine takes the lead, and subtle mustiness is present. Hits the mark as a sessionable pale, it's tasty with approachable bitterness and balancing toasted malts, refreshing and highly drinkable with a dry finish. Medium body and carbonation.

Bring a bunch of these to your next backyard bbq and you'll be a happy camper. It's just interesting enough and will pair well with most anything.

Hazy and cloudy straw color with moderate activity. Thick foamy and a bit frothy, white 3-4 finger head, lasting around 10-15 minutes, with decent legs and swirl reaction. Flavors of sweet grains, lemon, grapefruits, pineapples, caramel, clove, and floral hops. Slick and smooth full body with crispy carbonation. Medium strength finish, zesty lager yeast with grainy, peppercorn feel and smoky dry hops. If you don't pour the yeast it's more similar to a cleaner rustic and less soapy dry lager. If you pour the yeast all the way the body is less crispy while more murky and tongue coating, closer to typical tropical IPA. So it's a complex brew with very good balance, intensity, and freshness. Incredible smell of herbs. Overall a high quality craft.

Different flavour profile on this one. It's fruity but reminiscent of Thrills gum with a sort of 'soapy' citrus flavour that lingers. Will need to have another to see if my palette was off.

473 mL can picked up at the brewery this past weekend; best before Mar 29 2017 and served well-chilled.

Pours a hazy straw-yellow colour; highly effervescent, capped off by nearly an inch of soapy, bubbly white head that gradually seeps away over the next couple of minutes. A wide, frothy collar of foam lives on afterwards, along with a messy, continuous curtain of sticky lacing. A good-looking, unfiltered pale lager. The aroma is fruity and inviting, with plenty of tropical hop notes - citrusy grapefruit really sticks out, buoyed by accents of orange peel, pineapple juice and just a hint of pine resin. Some gritty, grainy pale malt sweetness underneath, but the hops run the show for the most part.

The same is mostly true of the flavour profile - there's short flashes of clean, grainy pale malts buried in there somewhere, but my taste buds are too busy trying to sort through the hop flavours to pay much attention to those. Citrusy grapefruit rind and orange peel flavours dominate initially, with light hints of pineapple and mango soon being replaced with pithiness and pine resin bitterness - the latter of which carries on briefly into the aftertaste. Lingering resiny bitterness on the tongue after each sip; more than I expected for 4.8%, but nothing that hop-inclined BAs won't already be used to. Light in body, with fairly assertive carbonation levels that continuously agitate and scrub the palate. Quite drinkable - chuggable, even, though I'd rather savour the remainder than use it to test that hypothesis.

Final Grade: 3.92, a B+. Railway City's Express ISL is pretty good stuff, delivering everything I'd expect from an "ISL" - or an "ISA" for that matter - though I'm not sure how well it manages to distinguish itself from other beers in those (pseudo-) categories. The citrusy, piney bitterness is appealing to me, but the grainy malt backing is a little too subtle, which makes this a rather unbalanced beer - though if you're a hophead like me, that isn't necessarily a big problem. Worth a try if you're stopping by the brewery, and something that might be worth bringing into the LCBO.