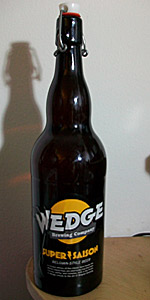 I wasn't expecting this to be as farmhouse sour as it is. Lots of bubble gum and spice but also pretty tart. Ok beer but I wouldn't get this beer again

On tap at the Wedge brewery, Asheville NC

L - copper and clear with clarity. 1 finger of head and some lacing

O- An awesome brew. Kind of like the Iron Rail but with Belgian yeast.

A: The beer is relatively clear golden yellow- amber in color and has a slight amount of carbonation. It poured into a snifter glass with a quarter finger high off white head that died down, leaving a thin collar around the edge of the glass.
S: Moderate aromas of fruits stand out in the taste - oranges seem to stand out in particular.
T: The taste is similar to the smell and seems very sweet with flavors of candied orange peels along with hints of coriander spices.
M: It feels light- to medium-bodied on the palate and has a moderate among of carbonation.
O: This isn't your typical saison. It tastes more like a tripel or a souped up version of a saison meshed with a witbier. No traces of alcohol are perceptible.

Pours a somewhat hazy orange with a thin head that fades to a ring. Smells of orange blossom honey up front with some coriander, followed by some orange juice aromas. Tastes like orange and tangerine juice all the way, with some peel at the end and some more coriander floating throughout. Super smooth in the mouth- eminently quaffable and refreshing, which means the abv is nicely hidden as well. A different take on a saison, but it works for me.

Glad to have a chance to finally try a bunch of new brews from Wedge. Pretty much cleaned the taps out over the last week there.

From the nice pour here we can really get things going. A nice golden amber color that has a light haze and great visible carbonation that streams to the surface with great force. A nice moderate level of white head rises up and stays on the surface for what seems to be forever while the rest settles down. Light aroma, bready with hints of lemon, pears and apples that settle in nice but start to fade as it warms. Taste is a little let down as it comes across a bit muddled and lacking the direction I was hoping to find. Sweet tasting with hints of bready, cookie dough like flavors mixed with light fruits and touches of grassy notes. Firm, yet light body is nicely blended and sits well on the palate.

Overall a really solid offering, but it needs something more, not sure what, but something, still not bad.

Lightly hazy nectarine that has a great deal of honey gold mixed in. Less than abundant visible carbonation leads to a less than Belgianesque crown of foam. The thick chunk of ivory colored bubbliness still looks good and is doing a bang-up job decorating the glass.

Unfortunately, the aroma is less than aromatic. On a positive note, it smells like a Belgian saison. It's lightly floral, lightly herbal and lightly spicy. As far as attempting to identify specific ingredients... no clue. And the brewery seems to want to keep them a secret.

Super Saison is not a super saison. It's better than average beer (in a general sense) that doesn't come close to the best that the Belgians have to offer. It takes more than estery yeast to get it right, after all. No appreciable alcohol helps the cause.

Saison-like flavors are present, it's just that they don't combine into anything very deep or complex. The beer is sweeter than expected, with spicy, tart and bitter coming along right behind. Let's go with sugar cookies with a thin layer of caramel, ripe pears, peaches and a very light dusting of ground clove. The taste score does not deserve to be rounded up. The drinkability score does.

Mouthfeel is where this ale suffers the most in comparison to its Belgian counterparts. There isn't much size and there's even less creamy expansiveness. It isn't a negative sensory experience, but then it isn't a positive one either.

Super Saison is not as good as Golem, which is the only other Wedge beer that I've had to date. The brewers are on the right track, but they aren't in sight of the lead horse. A few well-chosen tweaks *might* turn this into pretty good beer.

A-Golden copper with a thin white ring of foam that held on strong and left spotty lace.

Taste is overly sweet, with honey and caramel tones becoming cloying early on. Herbal hops are swept under the carpet of the bready sweet malts. A hint of cinnamon in the finish.

I suspect that there was a problem with the seal that caused the lack of carbonation. Even if properly aerated, however, the sweetness is just too much to allow this one to be enjoyed.

Pours an orange-gold color with a thin white head that soon dissipates into a thin ring around the glass leaving no lacing.

Smells of biscuity malts with a good deal of sweetness and hints of light fruits.

Tastes similar to how it smells. Syrupy malt flavors with strong hints of breadiness are joined by hints of bruised pears and light citrus flavors midway through the sip. The ending is on the sweeter side.

Mouthfeel is good. It has a nice thickness with moderate carbonation.

Drinkability is alright. I finished my glass but I'm glad I had a few other people around with whom to share the bottle.

Overall I wasn't terribly impressed by my first foray into Wedge Brewing. That being said it certainly wasn't bad enough to keep me from trying them again.

Reviewed on 06/05/2009. Bottle at PPRBSG09. Pours a cloudy light orange. Aroma of yeast, melon, and vegetal notes. Flavor is sweet and malty with the vegetal notes still present. Normally I really enjoy saisons, but this was not very well done, in my opinion. Meh.

A 1 liter swingtop bottle. Thanks to Deuane and Carolyn for "muleing" this back from NC. I can't wait to use this "stubby" 1L as a half-growler. Poured into my shaker "pint" glass. (alright, enough quotations for now). Appears a mildly hazed golden amber color with about two fingers of foamy off white head. Smells and tastes of spicy peppery yeast, grassy, fruity hops, lemon, pineapple, peaches, caramel malt, biscuits, and pears. A notch above medium in both body and carbonation. Glad I was able to try this Saison. Check it out if you can get your hands on some.

1 Liter swing-top into a Duvel snifter pours a crisp orange with a frothy off-white head that lasts as a thin layer and leaves decent lacing on the glass. Aroma is crisp sweet malts, spice and yeast. Orange peel and sweet fruits are present as well. The taste is a nice blend of sweet malts, sweet fruits, spices such as clove and pepper and slightly syrupy alcohol. The beer is quite crisp and light for the alcohol strength, making it a great spring beer, although it is one to be careful with, especially at 1 Liter. This is a great American brewed saison, something you honestly don't see enough of.

Growler pour courtesy of dkachur, who just returned from a somewhat epic road trip to Asheville, NC. Poured into a tasting glass.

Appearance: Pours a hazy, rather deep golden amber, somewhat dead-looking brew - though I'm told it was originally big, white, uniform, fluffy, with great retention and lacing, before the growler had been allowed to sit. There is a dusting and some streaky, glittery, runny lacing with decent stick. I'll give it an in between score.

Mouthfeel: Similar to the appearance, in that I think it's somewhat flat, but that's probably due to the bottle being open a little long (swing top and whatnot). It's a little uneven, with what carbonation is there, and though it's not cloying or syrupy, it's a little thick. I'm sure it was nice originally though ...

Drinkability: This one's really good, and I'm sure I'd rate it even higher if the bottle hadn't been sittin' around for a day before I got the chance to try it (and I'm told what I complain about wasn't a problem originally). 8.3% isn't too bad, it's undetectable, and the flavors of this one are really unique and interesting. Definitely recommended, and I hope to go back and re-rate this one on tap or a little fresher.

Pours a golden, nearly amber, color. Very, very clear with a nice big, fluffy white head, that leaves a little lacing. Really very pretty, but a tiny bit darker than the average saison I've had. The smell is filled with powdery malts, a bit of caramelly sweetness, a huge bready yeasty smell, but it lacks the nice funky twang that I like in a saison. The taste begins very bready, filled with malts, rasiny tastes, some faint sweetness, but the heart of the sweetness kicks in later. But first, you get a kind of funky drying out, with the faintest kind of sourness, the kind of cat piss smell people describe in taste, also a hint of mintiness. The the sweetness rushes in for the sweetness and really fills the whole thing out. The taste is very complex, but it reminds me more of a belgian strong pale, the sweetness needs a bit more farmhouse funk to come through. The mouthfeel is nice, sweet and chewy sort of. A bit out of place for a saison, but nice and full with good crisp carbonation. This one is really an enjoyable drink, highly approachable, but there's enough alcohol to slow you down.

So the Wedge is fillin' bottles now in Asheville, and a friend was generous enough to grab one of the new "Super Saison" bottles from the geniuses at Brusin' Ales... let's see what's going on here.

A. Pours a "super" fluffy, tall head, white and rocky and very impressive. Eventually, after 10 minutes, falls to cover the surface of the beer, which itself is a clear gold-yellow. Very pretty, very to style, and all around fine.

T. A bit sweeter than I'd like; lots of left-over sugars and some candi sugar caramel sweetness here. Feels a bit under-attenuated... then again, who knows... easy and clean, good yeast phenol character and a nice dry, sweet and lightly tart finish. Could be more complex, but is good all overall.

D. Not bad at all. Like all Wedge beers I've had this, is easy enough to drink a good amount of while staying true to the style.

The Wedge is absolutely on the right track with this Saison. I'd dry it out more and add some more spice and "house" character -- I like my Saisons a bit dirty -- but this is good beer and has no real flaws. Highly recommended brew from the best up and coming brewery in the Southeast.

Super Saison from Wedge Brewing Company
Beer rating: 85 out of 100 with 29 ratings