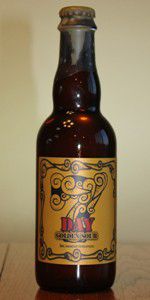 Reviewed by dsa7783 from New Jersey

3.96/5  rDev 0%
look: 3 | smell: 3.25 | taste: 4.25 | feel: 4.5 | overall: 4.25
Pours a clear gold color. 1/4 inch head of a white color. Slight retention and poor lacing. Smells of grapes, bacterial funk, slight apple, and wood. Fits the style of a Belgian Lambic. Mouth feel is sharp and clean, with an average carbonation level. There is a strong tartness and noticeable dryness. Tastes of grapes, bacterial funk, slight apple, wood, hint of sweet malt, hint of yeast, hint of citrus hops, and a hint of dough. Overall, average appearance, weak aroma, but good complexity, body, and blend. Overall, besides a weak aroma this is quite good.
Sep 27, 2018

This one initially feels a little dead in the light to medium mouth, but does finish with a slightly sweet tartness.

overall, I found this a difficult beer to rate & describe. it is not unpleasant in any way, just seems subdued and a bit lacking in flavor. I will say though, that the longer the drink went on, as it warmed, the more i began to appreciate the delicateness.

Smell: Funky and acetic; very reminiscent of an unblended Lambic

Taste: Acetic from the get go, with a very tart, sour character; funky with a distinct lemon pepper tone; very sour finish

Overall: Not for beginners, this is as close to an unblended Lambic as I have tasted out of an American brewery

Reviewed by hanuswalrus from Illinois

4.06/5  rDev +2.5%
look: 4 | smell: 4.25 | taste: 4 | feel: 4 | overall: 4
12.7 oz bottle purchased for $5. I don't think Trinity has been in Chicago for very long but I'm happy they're here now. Pours a pretty yellow-gold with white head. Looks gorgeous. Aroma is great. I get a nice blend of funk and tart. A really nice blend of funky, citrus and lemony tartness. Getting a nice, slight hint of funky cheese. Flavor leans more on the Lacto tartness and finishes really nice and dry. Wouldn't call it assertively sour, but I would say this is slightly sour as opposed to slightly tart, if that makes any sense. There's a slight puckering affect on the palate that reminds me of Warheads once I was accustomed to them. Mouthfeel is full of prickly carbonation. Really good beer and I look forward to trying all their other beers that are available here.
Jan 20, 2018
Rated: 3.89 by Jangoon24 from Illinois

Sep 15, 2017
Rated: 4 by TheBeerdedCharmer from Pennsylvania

Taste is very tart. Squinty eyes and and clenched jaw reaction. Tastes a bit like peach skin. Has a strong bitterness to it that I can't place.

Mouthfeel is dry, but not light. Overall, pretty good.

This beer pours a clear, medium golden yellow colour, with three fingers of puffy, loosely foamy, and somewhat fizzy off-white head, which leaves a few instances of pinprick lace around the glass as it evenly recedes.

The carbonation is adequate in its structurally supportive frothiness, the body a decent middleweight, and mostly smooth, as the sourness somehow just slides right on through here. It finishes off-dry, the mixed base malts holding fast against the lingering citrus, vinegar, and surprisingly gentleman-like funk.

Overall, this comes across as a nicely balanced sour ale, the twin axe attack of lacto and Brett kind of canceling each other out, or something. At any rate, a lot easier to drink than I was anticipating - usually I have a lot more liquid left over when I've completed writing reviews such as this.

3.96/5  rDev 0%
look: 4.25 | smell: 3.75 | taste: 4 | feel: 4 | overall: 4
A: Pours a clear medium yellow in color with moderate to heavy amounts of fine active visible carbonation rising from the bottom of the glass and faint brassy + golden yellow highlights. The beer has a finger tall fizzy foamy bright white head that quickly reduces to a large patch of thin film covering about 95% of the surface of the beer and a thin ring at the edges of the glass. Light amounts of lacing are observed.

S: Moderate aromas of hay and barnyard funkiness over the top of light aromas citrus/lime and slightly spicy/peppery yeast.

O: Enjoyable and pretty easy to drink with a slightly different set of flavors than I traditionally think of in sour beers (especially the lime + pepper). Definitely worth grabbing.