The Beer With No Name
Lonerider Brewing Company 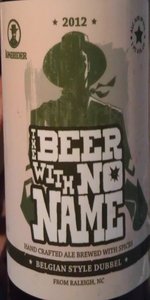 I really get nothing of a Belgian double. This brewery does wonders with many beers. Unfortunately this wasn't one of them. Very malty brown sugar and plumb. No Belgian yeast what so ever. That should be a bit of the prominant flavor. I aged mine, so the malts will def come out first. But no yeast. Pleasant but not what I expected. still I am enjoying it after analyzing it.

Served from bottle into a Duck-Rabbit nonic. Poured a deep copper brown with a half finger off-white head that subsided to a minimal amount quickly. Maintained phenomenal lacing throughout the glass. The aroma was comprised of sweet malt, bread, fruit, dark fruit, earth, wheat, grain and subtle spices. The flavor was of sweet malt, bread, fruit, subtle alcohol, earth, grain, and spices. It had a light feel on the palate with high carbonation. Overall this was a pretty decent brew. As far as the style goes, this one was a pretty good example. However, nothing really jumped out at me which was unfortunate. There was a decent booziness going on in the flavor which was a little offputting. The aroma was pretty good though for the most part. Really glad I got the chance to try this one but doubt I would sell my soul to do so again.

Was lucky enough to get a bottle from a buddy of mine when he came back from N.C.

O - A really good beer but I wouldn't think it was a dubbel. I would say more of a bock or a strong winter ale. Which, as it states on the bottle, is there holiday ale. I would definitely recommend.

A: 4.5 dark brown with great clarity and tiny bubbles in the head
S: 3.5 I can really smell the Belgium yeast which I am not a huge fan of faint other spices as well.
T: 3.5 very strong on the Belgium flavors and less on some of the spices.
MF: 3.5 decent carbonation with a weaker body.
O: 3.75 this was a decent Belgium beer but I am just not a fan of the strong Belgium taste.

A - dark amber with a thin, off white head that has little retention

This is by no means a bad beer. It has the makings of a decent Dubbel. For me I would have preferred they use a different yeast. The yeast added some spice qualities that reminded me oddly of a weizenbock. Besides that I thought the cinnamon was a nice compliment to the caramel and apple notes that came through. In the end it's another creative offering from Lonerider. I'm glad I tried it.


The Beer With No Name from Lonerider Brewing Company
Beer rating: 85 out of 100 with 19 ratings