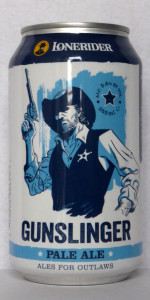 Drinking this at the brewery on a nitrous tap. Gotta love the nitro pour!
Appears orangish Amber.
Really beautiful head, NITRO, nice lacing.
Smells piney and sweet.
Tastes piney, malty and sweet.
Feels medium malty, but very smooth and creamy probably due to the nitro pour.
Overall, I would order again at the brewery, but, the nitro pour probably makes this beer creamier and better.
Perhaps further research is called for......

A 12oz can with a BB of March 2018. ABV is stated as 5.4%. Purchased recently from Trembling Madness in York. Described on the label as a refreshing pale ale hopped with Cascade.

A: Poured into an IPA glass. Can-conditioned. A deep, hazy orange-amber colour with fine suspended sediment and good carbonation. Yields a large head of creamy white foam that lasts for a while before subsiding to a patchy surface layer. Some lacing.

O: A solid American pale ale with a seriously resinous character. Looks great, while the aroma and flavour are replete with pine-laden hops, caramel malt and ale yeast. Nice body. Very drinkable, goes down a treat. Worth sampling.

Came to the table a clear full goden with a very thin wispy head that was gone in a flash.Aromas of toasted grain and mild spicy hops,a little sweetness is detected.Flavors are firmly toasted with some honey-like sweetness,the hops play a role with some spicy notes in a lingering finish.Not bad it's better than many that are supposed to be of the style.