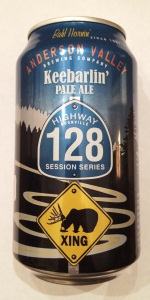 Notes: Brewed with 100% Columbus hops and loaded with hop flavor and aroma, Keebarlin’ Pale Ale takes aim at what a session beer should be. The use of Caracrystal® Wheat malt imparts subtle caramel and smooth dark toast flavors to perfectly balance the earthy, herbal hop profile.
View: More Beers | Place Reviews
Recent ratings and reviews. | Log in to view more ratings + sorting options.
4 by icemanls4 from Switzerland on Mar 16, 2017

12 oz. can poured into a Willibecher.

12 oz can with an incomprehensible code stamp on the bottom.

A fine session pale ale, with less hoppy bitterness and earthiness than usually found in APAs. Fruity aroma and flavor with hints of lemons, oranges and tropical fruit punch. Pretty flavorful for a 4.2% PA.

Mouthfeel: ight body with medium+ carbonation that is notably soft.

O: a good, but not great, example of the style.

A: See through gold body. 2 finger head that retains well.

M: Crisp. Watery, but it is a session pale ale.

O: This one is balanced. It is not as strong in flavor as other session pale ales, but it is still good.

Thanks to Joe for this one!
Served in a mason jar glass at Bottles in Lemont.

As an amateur Columbus hop grower, I wondered how a commercial 100% Columbus hop beer would taste. Turns out it was fairly average, but if this was released in the spring, it was probably a good 6 months old at this point.

Poured a brilliantly clear gold orange. Fluffy foam that formed crags and irregular peaks that rose above the rim of the glass, leaving behind lots of soapy lacing.

Aroma was of a pretty typical pale ale. Mild malt sweetness and a light green floral hop note. Pretty removed from what Columbus smell like, likely due to the age.

Taste was pleasant and fairly simple, pale malt and a floral green hop bitterness that was moderate, and lingered into the dry finish. Light bodied and easily drinkable. Hope to catch this one next year when fresh.

For a session pale ale, this thing packs a ton of flavor. This stands right up there with Founders All Day IPA.

Pours a finger of foamy head on a hazy straw colored body.
The aroma is bright orange, lemon and grapefruit.
The taste is mild lemon bitterness at first, slight honey sweet in the middle, finishes with a mild dry bitterness. Nice and easy.
The texture is crisp with soft edges.
Tasty for a "session" or otherwise.

This came out of the cooler at The Fridge and then got set aside as the bottles built up to the point that I held a CANcerted purge over the summer to be able to get The CANQuest ™ back on track. It’s good to be back!

From the CAN: “Bahl Hornin’ since 1987”; “Brewed with 100% Columbus hops and loaded with hop flavor and aroma, Keebarlin’ Plae Ale takes aim at what a session ale should be. No matter where you’re headed, our Highway 128 Series paves the way for a ‘slow lope’n beeson tree.’* *(That’s Boontling for ‘smooth ride’)”.; “Highway 128 Boonville Session Series”; “Solar Powered Brewery”.

The Crack! was another explosive affair with regard to their Hwy. 128 session series. Not only was it filled to the tippy-top, but once it was opened, it would not stop foaming through the opening. This, of course, put the kibosh to any thought of an inverted Glug and I went with a gentle pour, instead. This still created two fingers of dense, puffy, bone-white head with good retention. Color was a slightly hazy Yellow-Gold (SRM = 4 – 5). Nose was slightly piney, kind of dank and definitely earthy. Mouthfeel was medium. The taste was quite earthy, like fresh herbs right out of the garden. Dank, slightly minty, a little bit of garlic, all present in the mouth. Finish was dry and left a very earthy taste behind and my first belch really intensified the garlic flavor, although not as sharp as in Gubna. As a non-brewing hophead, I am always interested in trying these varietal IPAs to get a better sense of what each hop strain brings to the beer. Loads of sticky lacing were left in the glass in its wake. This was an interesting beer, but although it qualifies as “Sessionable”, one would probably be enough for me.

Up front I have to say that this is the worst product yet from Anderson valley. It looks like an IPA but the head is foamy with big bubbles. The aroma is mild and subdued.

The taste is dry and boring like many of the new breed of sessionable things that are sometimes called APA. They really should be called lapa for light. This thing is firing on two cylinders.

The aftertaste is that dry hoppy finish with not enough malt. All the hops used in this are just kind of wrong anyway. I do not recommend this. If someone were new to craft beers this would be a bad way to go, you'd be better off with something more substantial. If you love craft beers I don't know how you could like this.

12oz bottle. Poured out a clear, golden color with a small, white head of foam. It smelled very fruity with citrus notes and caramel. Subtle range taste with sweet caramel and a slight bitterness.

MF: Light bodied, delicate carbonation, not a fan of the balance

This a disappointment, was hoping for far more, hops are just not in my happy place at all. Great, I have 5 more of these to drink...