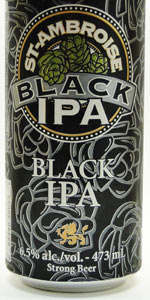 Notes: St-Ambroise Black IPA is a dark and hoppy unfiltered beer who’s secret resides in the use of Northwest ‘’C’’ hops like Cascade, Citra, Centennial and Chinook. This special beer has a toasty malt character with the accents and aromas of traditional India Pale Ales. Taste and enjoy!

Reviewed by Pmicdee from Canada (ON)

Pours inky black, crowned with nearly an inch of lumpy, foamy, beige-coloured head that wilts over the course of the next five minutes or so. Gobs of beautiful lacing are left in its wake, along with a soapy, frothy collar and filmy cap - looks fantastic. The nose is intensely hoppy - pine forest (needles, sap, all that good stuff), as well as grapefruit, flowers, coffee and dark chocolate, with just a touch of caramelized sweetness.

It's not bad. Hints of cocoa and caramelized sugar sweetness underneath, with the roasted malts and C-hop flavours sharing the limelight fairly equally. Faint grapefruit, with piney, earthy hops; both floral and roasted coffee bitterness rounds off the back end, with dissipates into a mixture of resin, cocoa, and just a twinge of boozy sweetness. Nearing full-bodied, with middling carbonation that adds a decent bite to this brew's otherwise smooth, pleasingly soft mouthfeel. Fair drinkability - I know black IPAs aren't everyone's cup of tea, but this one goes down the hatch as well as any.

Final Grade: 3.69, a B grade. For the record, I love McAuslan's flagship pale ale, and have enjoyed virtually all of their other products as well. But I just can't seem to get behind their IPAs: the session IPA, the double IPA, the regular IPA - I've had 'em all, apparently, and I couldn't tell you the first thing about any of them without looking at my old reviews, because they're just that forgettable. Their black IPA is not much different - it's a recognizable take on the style, and I do like the mouthfeel, so it's worth a tick for sure, but nothing truly stands out for me. A decent mixed pack inclusion, but if it were sold as a single I doubt I'd pick it up more than once in a while.

Appearance - Midnight black, with big tan head. Some sticky lacing clings to the edges of the glass.

Smell - Tons of roastiness, pine needles and subtle bits of chocolate. Blurs the line between IPA and Stout.

Taste - Plenty of bitterness, roastiness again, some bits of coffee and chocolate followed up with piney qualities and some citrus at the end.

Overall - Very solid Black IPA for a style that doesn't get much love.

Reviewed by altstadt from Canada (BC)

Very light hoppy fragrance with a touch of malt. Swirling the glass kicked up a hint of barnyard that quickly went away.

Turns into a light froth with fewer bubbles than liquid. Medium heavy body.

The hops give this a bit more character than their other dark beers. It isn't quite as one-note as the others.

Reviewed by SSS from Canada (QC)

2.63/5  rDev -29.5%
look: 4.5 | smell: 2.75 | taste: 2.5 | feel: 2 | overall: 2.5
A-Very nice espresso black in color with a moka head that lingers a while. Decent lacing
S-Aroma is malt forward with toasted Smokey notes.
M-low to medium mouthfeel, somewhat watery, carbonation is medium.
T-Subtle sweet coffee flavour at the forefront with an aggressive bitterness that follows and lingers.
O-Not sure what they think makes this an IPA, sure it is dark, maybe they put in hops, but I cannot detect them besides a hint in the aroma. Not a bad beer, but not a good rendition of the style...

This beer appears a clear, dark ruby highlighted brown colour, with one skinny finger of puffy, loosely foamy, and bubbly beige head, which leaves some decent melting ice shelf lace around the glass as things slowly sink away.

The carbonation is adequate in its palate-pinging frothiness, the body a solid medium weight, and mostly smooth, but for some of that char mucking about here. It finishes trending dry, the malt bottoming out, while the smoke and hops carry on carryin' on.

Overall - this is an agreeable enough version of this hybrid style, if it must indeed exist. Roasted, but not overly so, and equally malty and hoppy. I would hardly care for another one, however I can say that this is all right, especially if you might be a fan of such things.

Rated by ewpass from Canada (PE)

3.77/5  rDev +1.1%
look: 4.5 | smell: 3.75 | taste: 3.75 | feel: 3.5 | overall: 3.75
Can: Poured a black color ale with a nice large dark brown foamy head with good retention and some light lacing. Aroma of roasted malt with some green and resinous hoppy notes with a dry light bitter finish. Taste is also a good mxi of roasted malt notes with some medium hoppy notes of resin and green hops. Body is a bit light with good carbonation. Doesn’t necessarily stand out for the style but well brewed and enjoyable enough.
May 23, 2017
Rated: 4.04 by Niceroad77 from Canada (BC)

Reviewed by VbolieuV from Canada (QC)

The nose is pretty much sweet chocolate. Some hops aromas are present but it's mostly chocolate.

Nice mix in the mouth between the sweetness of the chocolate and the bitterness of the hops. Pleasant bitterness.

It tastes "fresh", not the best Black IPA I've tasted but good enough to drink it again.

Look: Black. About 1 finger of head. The visual is really nice

Feel: Goes down really easy, watery on the finish. But the mix of flavor is interesting.

So overall would I recommend it ? For sure, this is a solid beer and there is not many black IPA available out here in Montreal. So yes, give it a try !