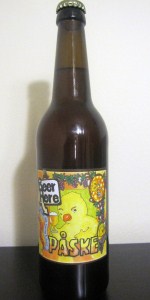 3.67/5  rDev -1.6%
look: 3.5 | smell: 4 | taste: 3.5 | feel: 4 | overall: 3.5
Pours hazy dark amber/ruby with a large but quickly fading head.
Nose shows lots of sweet malt and hops. Plenty of caramel and nutty malt mixed with tropical fruit, herbal and peppery hops, light honey and soft alcohol. Very nice, somewhat unusual.
Flavours are quite different with the hop profile showing only pungent herbal and spicy notes rather than any fruit. Not as sweet either although there's some nice bready malt. Alcohol is quite pronounced perhaps due to the honey.
Nice creamy mouthfeel, moderate carbonation.

3.7/5  rDev -0.8%
look: 3.5 | smell: 3.5 | taste: 4 | feel: 3.5 | overall: 3.5
Pours a murky jarrah honey hue which leaves a one finger creamy head that stays and leaves lots of lacing,the smell is weird its basically lots of honey and i mean lots with also caramel and grapes,the mouthfeel is over medium bodied and close to thick and the tastes of jarrah honey,barley,grapes and grains mix well and overall i dont get any hops but the tastes i get flow well together and i know this is a modernised early recipie but it works and to be honest i like it and would drink again cheers.
Mar 22, 2012

Reviewed by shambeano from Australia

S- a slight hoppiness to begin with, citrus, followed by a sweetness, honey perhaps of the tasmanian leatherwood variety. smells pretty good.

T-BIZARRE...there is really a lot going on in here. there is a bitterness that goes throughout here initially an acidic biley bitterness, that is not unpleasant just odd, followed by the citrusy hops to end. After a couple mouthfuls the Honey begins to show through, but only slightly, getting a slight hint of dark Fruitcake, grape and a little white winey, but an acidic white wine reisling maybe. And halfway down this acidic taste hits me, it reminds me of juniper and good gin.

D- although the mouthfeel is quite good and i really liked the flavour of this one, the peculiarity of this beer makes it one to sit back and think about, and although i would definitely try it again, i could not see myself ever drinking more than one at any one time.

This was a very peculiar beer, but it also has a high coolness factor beyond taste, being based on a recipe found on a stone Tablet and containing both red and white grapes, its interesting to taste to see how beer was back in the day (even if it is a modern interpretation) and somehow it really works, and is defineately worth trying.

Reviewed by MasterSki from Canada (ON)

A - Lots of light tan foam that has good retention and leaves some spotty lace. The body is a slightly hazed golden apricot color.

T - The taste is a lovely mixture of honey, toffee, rumcake, light floral hops and white grapes. Alcohol isn't present at all. It does seem very appropriate for an Easter beer.

D - It manages to integrate a whole bunch of sweet flavors without ever coming off as cloying or diabetic. If it showed up Stateside I'd definitely try it again - I'd love to see what the fresh hop bouquet does for it.