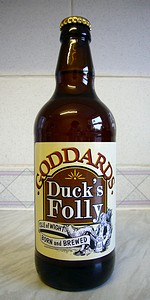 A: coming in a reddish amber hue with great clarity and a thin off-white foamy head, while the carbonation looks pretty understated.
S: juicy and rich in terms of Fuggles+Goldings-like aroma, plus syrupy toffee, nectar, sultanas, and very ripe plums & white grapes. Aromatic, a bit like Young’s Special London Ale, to my best recollection of the latter ale.
T: very light comes the foretaste, which is malt-rich but not heavy or sweet, coupled with mixed fruitiness, a tea-ish, earthy and herbal aroma of Fuggles hops and a fast developing wave of hop bitterness that is, well, “focused”. The lingering mildly sour fruitiness as of dried fruits, aromatic light-coloured malts and dry-ish chewy bitterness interact well to render a satisfying finish in each sip.
M&D: as in appearance, the carbonation remains very mild throughout the drink, going well with a medium body that packs a lighter flavour profile as far as a 5.2%abv. Premium Bitter is concerned. As a Bitter lover, I like this aromatic ale for the clean palate, the not-so-complex but well balanced hoppiness, and its superb drinkability – definitely worth trying.


Duck’s Folly from Goddards Brewery
Beer rating: 4.1 out of 5 with 1 ratings