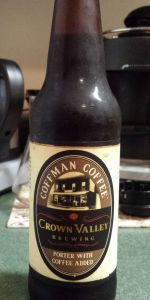 Picked up from the brewery. This brew is dark, almost black, with reddish highlights. The head is thick and tall, and the smell is intense of roasted malt and coffee. Espresso beans. The taste is bitter...quite bitter, with both hops and roasted grain (and the coffee?). There is an underlying malt sweetness and a lingering finish. Good, drinkable, and enjoyable, but not great. It seems a little too rough.

Poured into a Spiegelau stout glass a dark ruby hued brown with a 1" head which quickly dissipated leaving minimal lacing. Definite coffee and chocolate aromas. Coffee flavor up front with a tangy finish and a very faint lingering chocolate flavor. Flavor lacks complexity and is rather thin bodied for a porter. This will probably appeal to those who like a prefer a light bodied beer, but it is not among the best porters I have tried.

Dark brown in color with a fingernail of khaki colored head. Aroma is dark coffee. The flavor is dark coffee that starts bitter and seems to then turn sweet with a plum note with a hint of smoke. The mouth is heavily carbonated and oily.

Bought this bomber on a whim,

Not much of a porter or a coffee beer, a disappointment. Seemed more like a thin porter with coffee flavor added, yawn

Taste- Black coffee flavor that turns into a slight char flavor and finishes with a hint of sweetness.

Mouthfeel- Medium bodied with an average amount of carbonation.

The first thing I notice as I pour this is how light it is. Almost looks more like a brown with its almost-mahogany/dark red appearance. Creamy head sits around for a bit. Decent retention and lacing.

The nose is primarily acidic black coffee beans. I like this in a coffee porter, but it gets knocked down a notch or two because it's just too faint for my preference. There's some roasty malt behind it as well, and then almost kind of a corn sweetness that is a little disappointing.

The taste is the strongest point for this beer (as it should be?). It is primarily that same black coffee bean that the nose evoked. The roasty aroma turns into more of a burnt char on the tongue, and there's a little dose of sweetness somewhere near the finish line to balance it: the closest I can identify with the sweet is honey, though it's not really strong enough to explore too fully.

This beer has some very promising components, but somehow they don't seem to fully come together to their full potential. Both the aroma and flavour are somewhat muted, a little fainter and more muddied than I would prefer. The light appearance belies a medium body (I don't like thin porters, and I was worried that this would be one. Thank goodness I was wrong), but it's certainly not robust. The carbonation level is decent (another common pratfall, in my opinion is overcarbonation for these styles), not distracting or overpowering on its own but highlighting the acidic coffee. The mild sweetness puts forth a valiant effort in trying to bring balance to the acrid coffee, and almost coats your tongue on the finish (part of why it reminds me of honey), but the bitter coffee definitely dominates and lingers (as well it should). Not as grainy as I was worried, either. Like I said there is a lot to like in this beer. Some very solid components. It just doesn't all come together to its greatest potential, in my super official opinion.