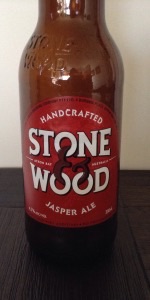 Pours a clear amber brown with a beige head. Looks quite thin. Aroma is of sweet dark fruits, plum and a little citrus. Flavour is very mild, carbonation is high.

I had a 330ml bottle.
Appearance: good red ale colour looks impressive. Small off white beige head that leaves good lacing and rim.
Aroma: earthy malts somewhat present. Reminds me of some English ales. Not overpowering at all and virtually no hop aromas for the style.
Flavour: light caramels and easy drinking. Well carbonated, more than expected for the style but it is from Northern NSW so you want a beer you can drink on a hot day that has refreshing carbonation. Very little hop bitterness which is a shame. While well balanced there is not much special about it.
Overall: nice, pleasant to drink but bland flavours and very little bitterness overall. I was disappointed with this one but it is ok.

A- pours a ruby red with a tinge of brown. Semi opaque, with a thick beige foamy head.

S- earthiness smell to it- almost like organic rich soil. Floral and wild honey aromas too.

T- slighty roasted malts dominate, but there is a salty tang halfway through. Real nutty flavour and a faint bitterness to the finish.

O- quite nice. There is a real earthiness to this beer, and the salty taste is something different. A bit thick to enjoy too many in one sitting.

A: Pours a deep red color with a tan head that fades to bits of lacing.

S: Aroma of malts, some nuts and bit of herbs.

T: Taste of malt, with a bit of a caramel sweetness and some nuts. Mild bitterness and a clean finish.

From Leura Cellars. BB may 13

Taste is also a tad muted. There is Stone and Wood-ness in the background with the lively zing and hop bite but it is overshadowed by the earthiness. It's ok but not standout. Earthy taste builds. Moderate hop bitterness. un-integrated.

Mouthfeel is light carbed. To style.

Not SW best effort. Not bad, but would head straight to Pacific in a heartbeat

Stone & Wood are a fine brewer, they're not breaking any moulds but likewise they know their craft well and the Pacific Ale is a great example of this. Jasper Ale sounds like it could be Pacific Ales English cousin and that already shows promise. Well how does it stack up then?

A: The body is a slightly cloudy copper (in certain lighting situations it might be considered a deep red/brown) with a bonemeal 0.5cm head on top.

S: Baked biscuit base with a musty yeast aroma, roasted chestnut, and no detectable hop notes. A very malty ale here, quite in the vein of Irish ales which tend to have a dryer less hop driven finish.

T: Upfront are notes of sweetness, touch of chicory, then we have a broad biscuit malt middle, some bread yeast and chestnut, followed by a dry finish. Nothing out of the ordinary flavour-wise.

D: Stone & Wood know their stuff, and this is indeed proof of concept. However where the Pacific Ale was a modern Australian take on a classic style, and somewhat interesting to boot, this is a run-of-the-mill Irish Red Ale, about as interesting as old aunt Molly's beef stew. If I could get this at a cheaper price on tap than the Pacific Ale I would still buy the Pacific Ale, and what more of an indictment can a brewer get than "Your other brew is more expensive but I will pay extra to avoid this one"?

Pours coppery ruby with a small off-white head.
Nose is restrained but shows some sweet bready malt and nutty notes.
Similar flaovurs, quite sweet with rich dark malt resulting in nut praline notes.
Carbonation seems a bit high for this kind of beer.

Pours a hazy orange copper hue with a two finger head and very nice lacing everywhere,the smell is very similar to their stone beer with aromas of carmelized malts,peaches,marzipan and toffee,the mouthfeel is medium bodied and has tastes of confectionary,caramelized peaches,nectarines and finished with a toffee sweetness and overall its too much like their stone beer and abit dimensional for my liking cheers.

Lovely earthy hop aroma with a touch of citrus. Plenty of malt with some interesting nutty, caramelised malt notes.

Malty and slightly sweet. Earthy, rounded bitterness. Hints of almost tea like tannins. Well balanced but I want a little more fruitiness out of the hops.

An interesting little beer. It isn't amazing in my opinion but it doesn't fail as a beer. A little more hop character would serve it well though.

Pours a nice red colour, just a tinge of amber at the edge. Head is beiege, nice and dense with decent trails of lace left behind. Looks pretty nice.

Smells malty and grainy, with little else really. Touch of toasted grain, some bread yeast - not cloying but adding a light sourness - and yeah, that's about it. Fairly bland, grainy aroma.

Taste is slightly toasty, and more of the same. Grainy, with sweet, slightly chocolatey malt. Hints of dark fruit, maybe some spice but it's mostly just a flat, subdued malty palate. Not getting that hop finish that the copy promised at all, and while I shouldn't blame copy for my disappointed expectations with a beer I'm sure the brewers had a hand in selling this and I'm just not picking up the flavours they had me anticipating.

Bit fizzy, decent body but could use more malt presence to give an interesting feel, especially given the prominence of malt on the palate.

Overall I think this is too similar in character to the Stone Beer and the Red Relief to justify an individual release. Doesn't really make me hold my breath for S&W's next brew.

On-tap at the Local Taphouse in Sydney.

Pours a reddish, ruddy amber hue—certainly not as red as other people have said it was, but reddish nonetheless. Some bubbly lace, actually forming tight patterns, but the head bumbles between forthy and filmy, with a heterogenous collection of small and large bubbles. Light body. Not bad all up, and the colour is good, if not as exciting as I expected.

Nose is grainy, pleasantly with some true earthy tones and a touch of leafy hops, that bear resemblance to the old world varieties of continental Europe. It's light and pretty clean. It's not bad, but it's a bit dull.

Taste is light; clear on the back. More touches of leafy hops, with a hint of native mint or some other Australian bush spice. It's a mild character on the back of an otherwise pretty thin beer. Again: it's not bad, but it's certainly disappointing.

It's drinkable, but far from being exciting. Unfortunately, Stone & Wood seem to have brewed one really nice, exciting beer, and have filled out the rest of their range with really uninteresting fodder. Come on guys, you can do better.

Listed as an Irish Red as that's what it tastes like. Sue me.

Pours a nice molten red with good head and lacing.

Smell is classic funky irish red malty taste, fruity yeast and a fruity fishy note I get from a lot of Stone & Wood beers.

Taste is more of the same really. Standard rendition of the style.

Mouthfeel is a little watery.

Overall a wholly average beer which brings nothing new to the table. Doubt I'll buy it again.