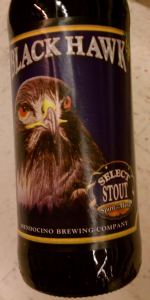 Irish dry stout - okay, then clear mug sounds like it should be a good to go then, right?
Here's the rest.
The appearance was a stiff dark brown color almost black with a quickly dissipating foamy white head. Not much lace, somewhat stringy yet slid off very quickly.
The aroma had some cardboard, earthiness, quick roastiness, slight toast, light coffee grounds and some dark chocolate.
The flavor had that dry sweet earthy cardboard and roastiness. Dark chocolate seemed there, but faint. Slight aftertaste of the roast and dark chocolate.
The mouthfeel was about medium bodied with a fair sessionability about it. Carbonation felt fine. ABV felt on par. Dry roasty and toasty to semi-dark chocolate bitterness nipping the finish.
Overall, pretty decent as an Irish dry stout, perhaps could come back to.

Good deep black appearance indicating heavy roasting with a full one inch of cream to beige colored head on the top of it. Plenty of roast, earthen smoke to the aroma.

Chewy, but not as much as you would expect from the color. Coffee malt notes, still some earthenness. Its reliable stuff for the stout crowd, must love roasting and can't be the guy who always complains about a stout being too thin.

Got as a gift. 12oz bottle served at 8deg in a tulip

S- Not much here. Some malt and a touch of chocolate but that's it.

T- Lacking all around. Just a lack of proper ingredients and money into this one. Not for me thx. From an Irish dry stout stand point it is fair at best hence the rating

M- Creamy going down then dries out

O- Nice brew but not for me. Good to those who like this style. My rating is fair and won't upset the balance of the universe with respect to where this brew stands in the ratings.

This alright brew went ok with....... Liver and onions! I fry bacon and then the onions in the grease! Yum LOL.

Poured from a 12 OZ bottle into a pint glass.
Aroma- Big coffee smell with a nice malt backdrop
Appearance- pours a black color with a thick brown head.
Taste- Coffee and a bit of licorice with a nice malt mix
Palate- A medium bodied beer with moderate carbonation with a dry finish
Overall- A real good Irish Dry Stout, highly recommended.

Of course there is roast but there is some hops too. Has some lacing to it. You can see light through it in a pint glass if you hold it up to one. A fact I like.

Initial taste is very flat. There is a hint of chocolate and coffee in the after taste, but there is also a lager or a metal taste at the end too. It's alright

A mild yet deceptively complex dry stout that drinks easily and satisfies the senses.

07/11/13 At Rattle N Hum, NYC. On tap. Just a taste was enough for me. Member#28419's comment re Mentos & Coke was close to the mark. Lacks body & depth. Doubt I could struggle through a pint. Rate Beer touts "bottle condition"ing so perhaps I judge too harshly. Let's try to put the Genie back in the bottle 'cause this don't cut it.

The Black Hawk stout...has a great name #1...as in the #1 hockey team in the NHL...but is also a solid stout. The beer pours an opaque black with thin slightly offwhite head that is leaving a spotty lace. The scent carries chocolate and peat. The taste is more leaning towards espresso. The mouthfeel is fuller in body with smooth carbonation. Overall this is a solid beer.

Dessert: not tasteless, but not really taste full. Again, not eloquent in defining hints of this and that (not a judge, just a critique sampling the many offerings and commenting accordingly--since looking for holy grails of a variety).

Deepest black color with a thick caramel head with good retention and leaving lots of laces.
Aroma of coffee, a touch of smoked malt and dark chocolate.
Flavor of earthy and citrusy hops, roasted coffee beans, dark chocolate powder, charcoal, pepper and licorice.
Very dry aftertaste with a long lingering bitter roasted coffee notes.
Light to medium body with perfect carbonation.
Assertive beer, but quite flavorful and very enjoyable. In my opinion it is under rated, and definitely I would drink this over Guinness.

A: Pours a very dark brown color. There's about a finger worth of a light tan colored head, also. Retention is about average for the style, but the texturing is very nice. Some decent lacing is left behind.

S: The aroma is rather muted, unfortunately. There is a presence of chocolate backed by some brown sugar, and there's even a touch of hoppiness. As it warms up, it becomes quite caramel-forward...too caramel-forward, actually.

T: Actually, it's hoppier than I anticipated. It tries to have an initial coffee-like flavor to start, but it's general hop bitterness that I'm picking up the most. That, and a ton of caramel. I'm really missing some of the roasted and chocolaty flavors I get out of other stouts.

M: At least it deserves some credit for having a crisp dryness to it. Given that, its light body, and its decent carbonation, it's pretty easy to drink.

O: Not a fan, really. Hoppy stouts need to have a nice backbone of malt and hop flavors, not weak caramel with a ton of generic bitterness. Guess which one this achieves?

Overall - This is my second go-around with this beer, and while I've enjoyed it more this time, it still doesn't quite hit the spot. It's a beer I don't mind drinking, so long as I don't have to pay for it.

Mendocino Black Hawk Stout has a thick, creamy, beige head, a very dark brown (essentially black) appearance, with reddish-brown highlights at the edges, and some thin lacing left on the glass. The aroma is of dark-roasted coffee, black bread crust, and chocolate powder. Taste is of charcoal, burnt sugar, black bread, dark bread crust, cocoa powder, milk, cream, dark cherries, licorice, and a minimal bitterness. Mouthfeel is light to medium, and Mendocino Black Hawk Stout finishes semi-dry, easy going, and highly drinkable. Overall, this is another great one from Mendocino!

Pitch black in color with a thin brown head. Lightly carbonated. Mild coffee aroma with not much else going on. Light to medium bodied, a bit on the light side for a stout. More coffee notes from the roasted malt. The low carbonation makes for a bit of a flat feeling on the tongue. All in all, a very average stout.

12 oz bottle.
Clear dark brown pour, nearly black in my snifter; The cocoa colored head is small and short-lived but leaves some lacing.
The nose is a little faint and subtle, but otherwise attractive. Smells a bit more like a sweet milk stout than an Irish dry.
T: It’s stronger on the palate than in the nose, with ample dark roasted malt providing hints of dark chocolate and coffee. No unwanted burnt flavors. Good sweet/bitter balance.
M: mildly creamy with medium+ body and a semi-dry finish.
O: a very good if rather mainstream version of the style, with a fine, long-lasting aftertaste of lightly bitter, very dark malts.

A- pours pitch black with a frothy and thick dark tan head that reduces to a thin layer with good retention, just a bit of lace.

T- roasted malts with a bit of a charcoal bitterness, toffee, finishes dry and chocolaty

M- light-med body, med-low carbonation, creamy finish. Not as heavy as a typical stout but right on with the style. Very drinkable .

O- I enjoyed this one, its super drinkable and even sessionable. Roasted notes along with some sweet chocolate match well.

Taste/Mouthfeel: Dark fruit. Some coffee/chocolate in the background. Definitely different than other Irish stouts, which usually seem to have less fruit. Starts smooth and gets watery like Guinness in the finish.

Overall Drinkability: I like this, since it's a bit different.

Pours pitch black with a thick, creamy, tan head. Excellent retention and lacing all the way down. Very fine bubbles in the head. Aroma is nice, roasted malt, caramel, and chocolate notes. Taste is good, bitterness from the darker malts comes through, coffee and chocolate notes as well. Slightly sweet up front with a lingering bite reminiscent of dark chocolate. Not bad, just not very different from many other stouts. Low to medium in carbonation, full body, and a creamy smooth mouthfeel. Overall a very nice beer for an end to a cold day like today.

The beer poured pitch black, produced a thin brown head,mwhich dissipated instantly. No lacing!
The smell hints roasted malts, dark chocolate, coffee.
The taste is dominated by the roasted malts throughout the tasting. There are hints of coffee and dark chocolate. The rating experience is more on the bitter side.
The beer is medium bodied and easy to drink, but certainly nothing special.

A: Zero head, but black as all get out.

S: Not much aroma. A light, roasty smell, but very weak.

T: Stronger, and solid. Pretty nice. Toasty and roasty, not burnt though, a good balance of a black malt. Maybe a little boozy

M: Smooth, pretty nice, with a beer this dark you could use a little higher protein malt to capture the body though...

O; Acceptable, for sure.

12 oz bottle poured into a dimbled mug. Bought it at the brewery in Saratoga in a mix 12 pack.

A -- Looks a lot like a cola. Very dark brown, not too many highlights. Tannish head with some big bubbles at first, dissipated pretty quickly to just some foam around the edges.

S - Roasty malt like you would expect, not much else.

T - Not very sweet. Dark malt tastes. No chocolate or coffee notes really, but there is some dried fruit kind of taste in the back.

M - Not too smooth, kind of bubbly like ginger ale.

O - I would drink a lot of other Irish Dries before this one, but it works. Cheers.

Appearance: Straight pour into a pint glass. The color is not-quite-opaque black; a little light passed through when I held it to a lamp. Two fingers of frothy, tan head dissipated slowly to leave a rocky and spotted lacing.

Taste: A little roasted malt bitterness complements oatmeal smoothness, chocolate, caramel, toffee, black licorice, black raspberry, and dark fruit plum. It has a thickish body that is leaning toward heavy, but its very smooth and velvety. At the end there is a hint of black pepper.

Drinkability: Don’t let the corny label fool you. This is solid stuff.

Pour was cola black with a small head that dissipated quickly and no lace.

Black Hawk Stout from Mendocino Brewing Company
Beer rating: 80 out of 100 with 660 ratings