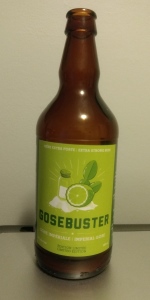 The latest version of this beer is 6.0% ABV.

A: Pours a light golden color and is quite hazy. Head is creamy looking with ok retention and lacing is alright.

T: Taste is stronger than expected considering the ABV. You get the straw, barnyard funk, coriander seeds at the front with juicy green apples and lime finishing with a slight salty finish. The higher than usual amount of residual sugar adds to the juiciness of the beer. Malt profile is much less present than in the smell but still a little bit there. It's definitely a really good and quite unique tasting beer.

M: Body is too heavy for the genre. Is kind of weirdly syrupy too with medium to low american style yeast carbonation, which isn't correct.

O: It's a good tasting beer that isn't much genre-correct. Taste is good, smell is meh, mouthfeel is pretty bad.

Appearance: A murky yellow body with low carbonation that produced two fingers worth of head that immediately dissipated and didn't lace very much.

Smell: Oh man, this is going to be a punch in the face...I can tell as it has an overwhelming lime smell punctuated back a background of sea surf. Warming was not remotely needed.

Taste: The best way to describe the potency of this is beer's sour note, would be "POW!" from the 60's Batman television. show. It starts with the small wheat malt presence with maybe a hint of coriander with a strong lime presence and then "BIFF!" as a salty lime bash hits you right in the face as it slowly peters out. This stuff could easily substitute as a chaser for tequilla...something that I'm not going to recommend here. It's a good thing I'm a fan of sour.

Mouthfeel: As I said, this stuff hits you like a shot to the mouth, and normally that would bug me, but for some reason it doesn't here. The carbonation is a bit low but the mild lime aftertaste makes up for it.

Drinkability: The beer's carbonation comes forth after it has been taken down, which isn't very pleasant. What is pleasant is that it's highly refreshing and masks its high alcohol content masterfully.

Final Thoughts: If you want a sour beer that is going to punch you in the mouth, wake you up and gets you tanked twice as fast as light beer with all the refreshment and flavour, this is the beer for you. If none of that appeals to you (and it's understandable that it might not) this beer isn't for you. I enjoyed it, so if you want a sour sour, grab this guy.