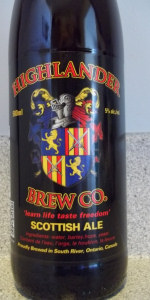 Reviewed by pootz from Canada (ON)

3.43/5  rDev -5.2%
look: 3.25 | smell: 3.25 | taste: 3.5 | feel: 3.5 | overall: 3.5
I have upgraded my review of this beer from the first samples I had some 3 years ago - the reworked recipe is a decent cross between a Scottish pale ale with micro brew attitude...rich copper-red color, big puffy cap, aroma is demure with toasted cereal tones fruity esters - taste is roasty-toasty-caramel malty in front with good hop bite - goes to a clean drying finish punctuated by a nutty-toasty maltiness. A great session ale. I will have a few in the fridge when it is available
Jan 09, 2018
Rated: 3.97 by Nost from Canada (ON)

This beer pours a clear, medium copper amber hue, with two fat fingers of tightly foamy, chunky, and near-creamy off-white head, which leaves some decent layered dissolving cloud lace around the glass as things bleed away.

The carbonation is fairly stilted, hardly exhibiting a bare frothiness, the body a pleasantly plump medium weight, and smooth, I suppose, though a sort of steely flintiness lingers from its just out of the fridge state. It finishes well off-dry, the malt still the headliner, but moderated well enough by the lesser biscuit and hop essences.

A flavourful and enjoyable Scotch-tinged pale ale, the malt complex and well drinkable. That's four for four (and yet I'm not on the floor) for this brewery, who seem to have a predilection for traditional UK styles (if their name didn't give it away) - and that's a-ok by me, especially when they are this proficiently turned out.

Reviewed by ckollias from Maryland

A: Pours an amber brown hue with a solid white lace that lasts for awhile before ending in a wispy lace.

T: Similar to the aroma there is a malty caramel flavor that finished slightly dry

Reviewed by andrenaline from Canada (ON)

A - Pours a nice dark amber colour, thin layer of head with no retention or lacing.

S - Loads of bready malts, sourdough, rye and a hint of peat. Sweet caramel and buttered bread come through on the finish.

T - Peat notes are subdued by the heavy breaded malts, hints of smoke and leather come through on the finish alongside burnt caramel, toffee and some leafy greens.

O - A tasty scotch ale, decent flavour profile and worth a try. I would probably buy it again, but I doubt it will see the shelves of Northern Ontario again.

Reviewed by Kremlock from Canada (ON)

A: head builds up to about 1 inch and then settles down to a nice 1/8 inch across the top. Colour is hazelnut, very clear with no particles. There is a bit of lacing also.

S: Caramel and toffee do dominate the smell. You can smell the caramelized malt in here. No bitterness, just sweet malt

T: Toasted nuts, caramel, toffee and all very clean and balanced. Residual sweetness is low and there is a low dryness to it in the finish which makes the sweetness very well balanced and leaves you to wanting more. Allowing the sip to finish and waiting for your next you can taste raisins and baked pear.

O: This is the 5th bottle I buy and it's now a must have in the fridge. I just love the balance of flavours with the bitterness that finishes it. This is a amazing Scottish Ale and a must try.

Reviewed by korguy123 from Canada (ON)

M- Light bodied, wish it had more chew to it. Carbonation is a little high.

Reviewed by mick303 from Canada (ON)

Aroma is of quite malty, a bit heathery/floral. A slight earthy pepperiness. Slightly retrained but interesting.

Taste is of strong caramelized malt, very malty and rich. Sugar is present and sweetness is very assertive for a time, and then dry on the finish. My impression of the flavour is strong, but a bit of refinement seems lacking.

Mouthfeel has an initial carbonation then a strong dry malt, medium bodied, perhaps a bit unbalanced for the style, quite dry to the end.

An interesting beer to drink, definitely a welcome switch up. Probably not the best everyday drink, flavours are strong but come across a bit unbalanced.

Pours a clear copper-amber colour, topped with approximately one finger of frothy, off-white head that wilts away before a minute's time has passed. It is survived by a soapy film on the surface, foamy collar and some modest lacing smeared onto the glass. The aroma is pleasant, if a little understated in intensity - mostly malts here, with some toasted nuts, biscuits, poundcake, molasses, butterscotch, as well as some light peat and dark fruit notes. Unique and enjoyable.

The aroma certainly got my mouth watering, and the taste does not disappoint in the slightest. Dominated by a multitude of malty flavours - buttered biscuits, toasted hazelnuts and molasses are probably the most prominent. Some light plum and raisin fruitiness adds additional variety to the profile. Not overly sweet, despite the abundant malt flavours - it finishes with floral, leafy dryness and some light, musty smoke/peat flavours that linger only briefly. Medium-bodied, with mild carbonation and a smooth, slick mouthfeel. Highly sessionable - I could drink this stuff all night without tiring of it.

Highlander Brewing's Scottish Ale makes for one damn fine pint in my opinion, and I'll certainly pick it up again some time. There is something about this stuff I find highly satisfying. I really hope this stuff makes its way to Sarnia eventually (this particular bottle is from a London shop), because I can definitely see myself craving it again. It's also pretty good value at only $3.25 a pint. Definitely worth a try for any fan of malty UK session ales.

Bomber from the LCBO - still a fairly good deal at $5 per 650 mL. This remains one of my favourite Ontario-made examples of a lighter Scottish-style ale - not that there is a lot of competition in that category. If you are just looking for something malt-forward, simple and sessionable, this is a beer that will probably be right up your alley.

Pours a clear coppery bronze with one finger of eggshell white head and a few spots of lacing on the pint glass.

Overall, this is a solid Scottish Ale with some English Pale and Brown Ale elements. Worth a purchase as the style is hard to come by in Ontario.

Reviewed by spinrsx from Canada (ON)

Appearance - Clear amber/copper yellow colour with an average size fizzy beige coloured head. There is an average amount of carbonation showing and there is some faint lacing. The head lasted for only a short while.

Taste & Mouth - There is an above average amount of carbonation and I can taste malts and corn mixed with some caramel/butterscotch. There is also a bit of a hop bitterness and some grassy notes and just a hint of dark fruits. It ends with a malty semi sweet aftertaste.

Overall - Something that seems relatively well crafted and very drinkable.. but not all that exciting. It reminded me of some of the offerings I have had from Picaroons. I wouldn't pick this particular beer up again, but I'd surely try more beers from this brewer.

Reviewed by TheHammer from Canada (ON)

Smell: Plenty of nutty roasted malt, with a slight undertone of peat and smoke. The malt is very dominant, and didn't need a lot of warming to come out either. However as it warms it just keeps getting better.

Taste: Starts with well roasted malt, backed up with a smoky peat and plum taste. It builds up as the smokiness takes over and a nutty taste of almonds and hazelnuts come forward as the two combine with one last touch of peat. Solid stuff.

Mouthfeel: Well done as the nuttiness and peat mildly linger and the carbonation helps out the entire body. Transitioning is good too, but points are lost for the lack of head.

Drinability: Medium bodied and not exactly for summer drinking, but pretty much this beer could work out for any other time. Easy going down, easy staying down and certainly something I could drink all night.

Final Thoughts: I had never heard of, nor seen this brewer before, so I thought I'd pick it up. Having done so, I am glad I did. If this is this brewer's flagship beer, I think I would expect great things. Well worth the price.

Reviewed by cyrenaica from Canada (ON)

I tried this beer on May 21, 2012 after purchasing from one of the local LCBO outlets. The beer poured translucent coppery-brown colour with a thin tan coloured head. The aroma was sweet malt, molasses, caramel, and some floral hops. The mouthfeel was medium bodied with medium carbonation. The flavour is a disappointment. Quite metallic for a Scottish/Scotch ale

Reviewed by CanuckRover from Canada (ON)

Clean malt from beginning to end. Nice dark malt flavours complemented by a rich woodiness. Nice toffee notes, but again it's not sticky, flavours are very clean, slightly slippery even.

A nice one to have in the fridge for a Scottish Ale with all the requisite flavours, but that doesn't go overboard.

3.9/5  rDev +7.7%
look: 4 | smell: 4 | taste: 4 | feel: 4 | overall: 3.5
Highlander Scottish Ale has a toasty, chestnut-brown color and clear, glossy complexion. Bubbles float about idly although patch little together except a skirting along the perimeter of the glass. Not really what I'd consider 'head'. It's somewhat unique to see something so dark yet simultaneously transparent and so resplendent.

The aroma boasts a lot of malt, but not a ton of malty sweetness. This is definitely not dessert. It has the toast, some dark fruitiness, and is accentuated by peat. While ultra fine, hints of earth, heather and smoke add subtle complexity. Floral elements gradually come to life and become hard to ignore. It really keeps you sniffing!

As the aroma let on, Highlander Scottish Ale has a very simple but succulent maltiness that is enlivened by the odd hint of smoky peat. It's not sweet enough to throw around words like 'caramel', although there is some degree of sticky-sweet fruitiness. The most prominent taste is that of toasted nuts (hazelnut, in particular). Pretty delicious.

It's nice the beer can afford bits and pieces of sweet flavors (raisin, toffee, nougat, plum) without having them linger. The sweetness is really restrained. Same goes for the roast - you get a trace of smoke, just enough that it's noted but nothing more. It has a very subtle complexity that's intriguing and urges quick, repetitive trips back to the glass.

I'm never sure what to expect from Scottish Ales. And then there's "Scotch" Ales, which is a whole other thing. Variations abound. Brewers are hardly as precise and consistent as beer judges insist they be. Highlander's is an enjoyable, well crafted example and is certainly worth trying (and buying again), especially for those fans of the style.